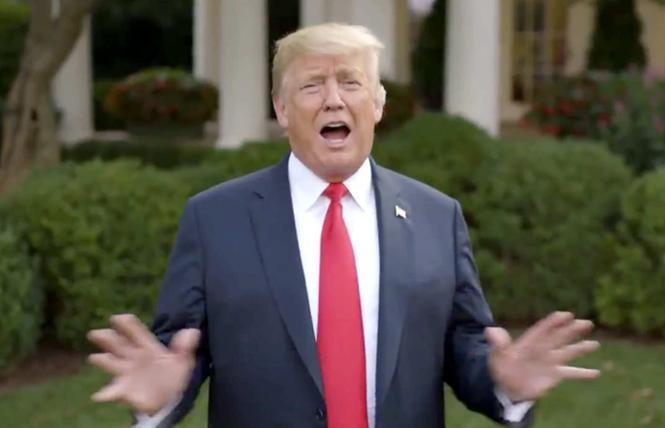 Log Cabin Republicans, the national gay Republican group, made a big splash August 15 when it published an opinion piece in the Washington Post announcing its decision to endorse President Donald Trump for re-election. The reaction was nothing like an end-of-the-summer pool party.

Charles Moran, a gay man who was a Trump delegate to the 2016 convention and who is on the Log Cabin board, serving as its spokesman, said the response to the endorsement "has been what was expected."

"Our chapters are thrilled — they wanted this overwhelmingly, so this really is of benefit for them," said Moran. And "the left, especially the gay left, is apoplectic."

Earl Fowlkes, chairman of the Democratic National Committee's LGBT Caucus, said he couldn't understand "how an LGBTQ organization of any kind can support an individual who has consistently shown a disregard for the rights of LGBTQ Americans."

But it was not just the left criticizing the endorsement. Gay former Representative Jim Kolbe (R-Arizona) and Log Cabin founder Rich Tafel do not support the move.

"While I find President Trump's positions on LGBTQ issues to be mixed, he would get as many poor marks as good ones, including the ban on transgenders in the military," said Kolbe. He said he "regrets very much that they have taken this position, especially so early in the campaign."

Tafel said, "I just don't think Trump's a good leader and he's not a conservative."

"Log Cabin Republicans of San Francisco is proud to have endorsed President Trump at our membership meeting on June 26, 2019 in front of California Republican National Committeeman Shawn Steel," the board wrote in a statement to the Bay Area Reporter. "During the meeting, Mr. Steel was presented with a letter from Log Cabin California Chairman Matthew Craffey announcing the unanimous endorsement of the 11 other California Log Cabin chapters. The first Log Cabin Chapter in America is proud to be leading the nation in the support of President Trump's re-election."

The timing of the endorsement was both unusual and unfortunate for the group.

In the past, Log Cabin's board has put off endorsing a candidate until very close to the convention. In 2016, it put the endorsement vote off until just two weeks before the election (and it voted to "withhold" endorsing Trump).

This year, it's taken the vote 10 months ahead of the Republican convention.

And the endorsement arrived between two high profile moves by the Trump administration to take stands against LGBT equality — one in a Supreme Court case, the other in a federal contractor regulation.

"It takes a certain level of perverse chutzpah, or a certain level of confidence in your gaslighting abilities, to claim that President Trump is good for LGBTQ people in the same week that the Trump administration moved to let federal contractors use 'religious exemptions' as an excuse to discriminate against LGBTQ Americans in the workplace," wrote Daily Beast senior editor Tim Teeman.

On the same day the endorsement article ran in the Post, the U.S. Department of Labor published a proposed rule change in the Federal Register, saying it would "clarify" the civil rights protections for "religious organizations" that enter into contracts with the federal government. The change would allow contractors to "prefer" hiring people "who share their religion" and to "condition employment on acceptance of or adherence to religious tenets as understood by" the employer. LGBT legal organizations say the proposed change gives a "green light" to employers wishing to discriminate against LGBT people.

On the day after the endorsement ran, Solicitor General Noel Francisco submitted a brief to the U.S. Supreme Court arguing that the justices should rule that Title VII of the Civil Rights Act does not prohibit discrimination based on gender identity. The court will hear arguments on the case, Harris Funeral Homes v. Equal Employment Opportunity Commission in October.

Trump's anti-LGBT positions run deep
Most critics of the endorsement cited one or more of the many other actions the Trump administration has taken that have appeared to undermine equal treatment of LGBT people. In July 2017, Trump tweeted he was barring trans people from serving openly in the military. His administration has withdrawn Obama-era guidance from the departments of Education and Health and Human Services that had sought to eliminate discrimination against LGBT people. It instructed the U.S. Census Bureau to remove any mention of LGBT people on upcoming surveys and instructed all departments to remove barriers to employers using "religious" or "moral" reasons for gender-based discrimination. The Department of Justice has put the Trump administration on the side of employers who discriminate against LGBT people in several cases and sought waivers for states to discriminate against LGBT people in foster care.

The Log Cabin endorsement essay makes only brief reference to these actions.

"While we do not agree with every policy or platform position presented by the White House or the Republican Party," stated the endorsement, "we share a commitment to individual responsibility, personal freedom, and a strong national defense. ... We are committed to letting all qualified Americans serve in the military, and Log Cabin Republicans was a leader in the legal fight to end the 'Don't Ask, Don't Tell' policy. We oppose the transgender service restriction and will continue to press the administration to reconsider."

"To be treated equally, fairly, and justly under the law is our goal, and we know that 'Inclusion Wins' is a mantra we share with the president," concluded the essay. "The Log Cabin Republicans endorse Donald Trump for re-election as president."

Kabel is an attorney who served as a special assistant to President Ronald Reagan and was appointed to the White House HIV Advisory Board by President George W. Bush. Homan is a member of the Republican National Committee's executive committee. Both live in Washington, D.C., and both served on the Republican National Committee's Rules Committee at the 2016 convention that nominated Trump.

According to Kabel and Homan's essay, Trump has taken "bold actions that benefit the LGBTQ community."

The endorsement credits Trump with having "committed to end the spread of HIV/AIDS in 10 years," using U.S. influence to "persuade other nations to adopt modern human rights standards," and "launching an initiative to end the criminalization of homosexuality" in other countries. It applauds the president for having appointed gay diplomat Richard Grenell as ambassador to Germany and says Trump has appointed "many LGBTQ" people to serve in his administration.

The Log Cabin news release announcing the endorsement said the Log Cabin board consulted with more than 50 chapters in 21 states before voting for the endorsement. Spokesman Moran said the group also had "multiple meetings with senior campaign officials at HQ in Arlington before we started this process, and they were enthusiastic."

"Throughout this process, they were welcoming of our support, were desiring of our endorsement, and offered technical assistance if needed," said Moran. After the endorsement, he said the group received "shares, retweets and kind words from the highest levels of the RNC and Trump campaign."

This week, Trump boasted of the endorsement during a press gaggle.

The president was responding to a question from the Washington Blade about whether Trump was OK with the way his administration has made it easier to discriminate against LGBTQ workers; Trump ignored the question.

The Republican National Committee made no mention of the endorsement on its website, but RNC Chairman Ronna McDaniel did retweet the Post article on her Twitter site.

Dan Innis, a gay Republican and former state senator in New Hampshire, said he hopes the endorsement will "keep the issues of the GLBT community front and center in [President Trump's] policy decisions."

"I was a strong advocate for the endorsement," said Innis. "While no one agrees with everything a president does, President Trump has been steady in a number of areas that are important to me. Overall, I think he is supportive of our community."

But Casey Pick, a former program director for Log Cabin, expressed shame over the endorsement.

"I know personally the calculations that go into Log Cabin's decision of whether or not to endorse a presidential candidate," wrote Pick in an essay posted on her Facebook page. "I saw the aftermath of rejecting George W. Bush, I was part of the process leading to the endorsement of John McCain ... and mine was the hand that wrote the announcement and explanation of our endorsement of Mitt Romney in 2012."

In the Romney endorsement, wrote Pick, "we did not sugarcoat the candidate's flaws; we acknowledged that we were coldly weighing the benefits of having a conservative we felt we could work with in office against our calculation that the Federal Marriage Amendment he had supported was no longer a threat, and making a call that would have allowed us to be a voice of influence on behalf of LGBT people if Romney were to have won.

"I am not ashamed to have written that [Romney] endorsement," wrote Pick. "I am convinced that the board of directors of today's Log Cabin Republicans should be ashamed to have put their names on this one."

Tafel, who founded the national Log Cabin group in the 1990s, said, "We often think that polarization is between the left and right, but when you get into the conservative movement, there are huge divisions over this president. This endorsement is a good example."

Updated, 8/21/19: This article was updated to include reaction from President Trump.