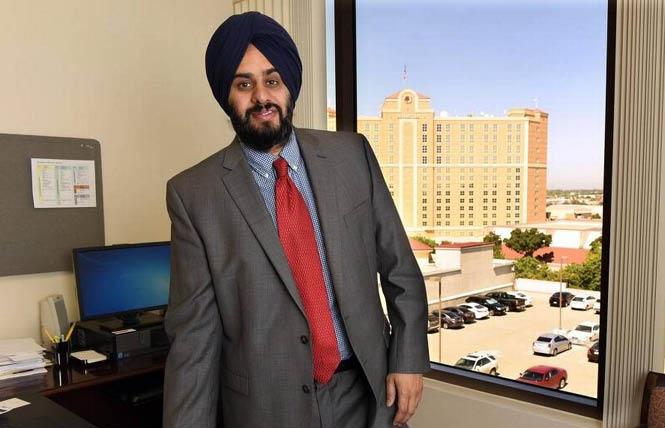 Equality California plans to call on the California Democratic Party to censure a state Senate candidate for what it considers to be homophobic campaign tactics, the Bay Area Reporter has learned.

In an interview EQCA Executive Director Rick Zbur said the statewide LGBT advocacy organization would seek a formal reprimand of Democratic Modesto City Councilman Mani Grewal due to an online ad and statements he has made about Senate Bill 145. The legislation aims to ensure LGBT adolescents are treated the same as their heterosexual peers when faced with the possibility of being listed on the state's sex offender registry.

Grewal, who is straight, is running against lesbian state Assemblywoman Susan Talamantes Eggman (D-Stockton) in the race for the state's 5th Senate District seat in Stanislaus and San Joaquin counties. Covering the cities of Modesto, Riverbank, Stockton, Manteca, and Tracy, the seat is currently held by lesbian Senator Cathleen Galgiani (D-Stockton), who is term limited from running again next year.

In a letter EQCA sent Grewal Tuesday, August 13, it called him out for "employing thinly veiled anti-LGBTQ attacks in your campaign" for the Senate seat and warned him it could seek his censure by state Democratic leaders. It was in reference to a video advertisement Grewal posted online that features Stanislaus County Sheriff Jeff Dirkse voicing his apparent opposition to SB 145, authored by gay state Senator Scott Wiener (D-San Francisco).

Introducing the 15-second ad on his campaign Facebook page June 12, Grewal wrote that he's "proud of my work to guarantee that adults who molest children continue to register as sex offenders."

[UPDATE: Sometime after the B.A.R. posted its article Friday afternoon, Grewal removed the video with the sheriff from his Youtube page and also deleted his post from his campaign Facebook page.]

Yet, in cases where the consensual sex involved vaginal intercourse between an adolescent heterosexual couple, judges have the discretion to decide if listing on the sex offender registry is warranted. Wiener's bill, which EQCA is sponsoring, passed out of the Senate earlier this year and is now pending in the Assembly.

"This bill is actually quite simple. All it provides is that LGBT young people are to be treated exactly the same way as straight young people when it comes to deciding who goes on the sex offender registry," explained Wiener. "We have an existing structure that when a young person is 14 to 17 years old and the older person is no older than 10 years of the younger person then if vaginal intercourse is involved, a judge has the discretion if the person goes on the sex offender registry.

On a number of occasions this year Wiener said he and his staff spoke to Grewal about the bill so that he understood what its implementation would mean. According to Wiener, the two spoke in person about the legislation at the California Democratic Party's convention held in San Francisco at the end of May.

"He told me he had misunderstood the bill, that he was not going to be doing this anymore, and he apologized. I told him at the time I appreciate that and would let bygones be bygones," recalled Wiener. "When I learned he was continuing with these videos and then responding to the press with the exact same statements he made earlier, my jaw dropped. I could not believe it."

It's shameful that Modesto City Councilmember Mani Grewal thinks the only way he can win in #SD5 is to lie to voters and attack the #LGBTQ community. His comments about #SB145 in the @StocktonRecord today are as outrageous and offensive as they are blatantly false... 1/3— Samuel Garrett-Pate (@sgarrettpate) August 15, 2019

EQCA leaders were further outraged with Grewal telling the Stockton Record newspaper this week that, "Like every parent, I was alarmed when Assemblymember Susan Eggman put her name on a bill that would allow a 21-year-old man to molest my 11-year-old daughter and then be exempted from registering as a sex offender."

In a statement his office released Friday, August 16, Wiener stated he was "deeply disappointed" by Grewal's comments. He accused him of not only "attacking the LGBT community" but also of "buying into the malicious slander that LGBT people are pedophiles."

Contacted by the B.A.R. prior to the release of his statement, Wiener would not comment about EQCA's decision to seek censure of Grewal. He did express his support of the organization calling him out for his "homophobic attacks."

"My hope is that Mani immediately retracts his own statement and stops with the attacks and we can all move forward," said Wiener. "That is my hope."

He said that Grewal and his campaign consultant, Richie Ross, "should be ashamed" of themselves for utilizing a classic anti-LGBT attack line and regurgitating talking points being used by Republicans and anti-LGBT groups opposed to the bill.

Neither Grewal nor Ross responded to the B.A.R.'s request for comment by deadline Friday. In a letter he sent EQCA Thursday, Grewal defended himself as a supporter of LGBT rights.

"As someone who opposed Proposition 8 in 2008 and most recently worked to deny a Modesto city permit for the 'Straight Pride' parade in my city, please know that you can rely on me to stand up for the LGBTQ community," wrote Grewal.

It is unclear how he opposed Prop 8, the ballot measure that banned same-sex marriage in California. Sources told the B.A.R. that voting records indicate Grewal did not cast a ballot in that year's November election. Nor does he appear to have donated to the campaign against the measure, according to a database of donors for and against Prop 8 compiled by the Los Angeles Times.

And despite Modesto leaders rejecting the permit request for use of a city park for the straight pride event, Grewal has been criticized for not speaking out against the blatantly homophobic parade during the council meeting where the permit was discussed.

"He has been radio silent on this straight pride in Modesto," noted Eggman in an interview with the B.A.R. Friday.

In his letter to EQCA, Grewal did not apologize for the language he has used regarding SB 145. Instead, he doubled down and expressed disbelief he was being criticized when Eggman had herself removed as a co-sponsor of the bill.

"When she did, I assumed that she did so because she agreed that the legislation was as poorly drafted as I did," Grewal wrote. "I am somewhat surprised that six months later my position, which followed hers, is seen as an attack on LBGTQ rights. It is not."

Eggman told the B.A.R. she supports the legislation and plans to vote for it when it comes before the Assembly. Her name was removed as a co-author, she said, when other members of the Legislative LGBTQ Caucus did not sign on as well, although the affinity group for out legislators had made it a priority bill this session.

As for Grewal, she said, "I think his positions are clearly not in line with Democratic Party values and policy positions in the least. If you are running as a Democratic candidate and calling yourself 'the different Democrat' but you take positions well outside party values, then it makes sense that the party will censure you."

In addition to calling on Grewal to stop attacking Wiener's bill, EQCA urged those Democrats who had endorsed him for Senate to withdraw their support of his campaign. Many had endorsed Grewal prior to Eggman's entering the race earlier this year. Last year, she had ruled out seeking the seat before changing course in March .

Among Grewal's endorsers listed on his campaign site is Galgiani. EQCA reached out to her this week to request that she rescind her endorsement. To date, she has yet to do so or indicate she will dual endorse Eggman. Galgiani's office did not respond to the B.A.R.'s request for comment by deadline Friday.

EQCA recently endorsed Eggman's Senate bid, while Wiener said the Legislative LGBTQ Caucus had done so in the spring. Eggman told the B.A.R. she would welcome the support of anyone who had endorsed Grewal now that people know what he means when he says he is "a different Democrat."

"People have a very clear choice to make. Either we go backwards or we continue to go forward," she said. "Mani's campaign has clearly decided to go backwards with our values."