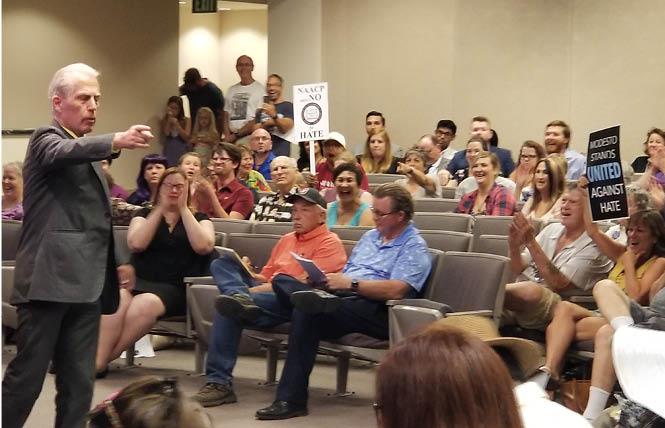 After several hours of listening to supporters and opponents of a planned "straight pride" event in Modesto, the City Council took no action on the matter Wednesday night, leaving the fate of a permit for the gathering unclear.

At the August 7 meeting, council members heard public comment about a permit for the National Straight Pride Coalition to hold an event in Graceada Park Saturday, August 24. Over 150 people joined a vigil held before the meeting to protest the event, and the council's hall was packed to capacity thereafter.

Modesto City Hall had heightened security for the meeting, with a dozen uniformed police officers patrolling inside and around the building, as well as unarmed security using a metal detector wand on everyone who came through the door.

National Straight Pride Coalition founder and failed 2018 candidate for U.S. Senate Don J. Grundmann was among the first people whose name were called to address the council. Grundmann, 67, a San Leandro resident, spent most of his allotted two minutes insisting that his group and planned event are not racist, and accusing Councilwoman Kristi Ah You of being a racist herself by describing the planned rally as "hateful, harmful, insincere, and dangerous," in a Facebook post earlier this week.

Ah You is the birth mother of Matthew Mason, the 28-year-old man who organized the vigil and has become a symbol of resistance for this event. Mason was adopted by Modesto resident Mylinda Mason, another member of the National Straight Pride Coalition, who disowned her son when he came out as gay at 19.

Grundmann received a fair amount of razzing from the crowd when he mistakenly described his coalition as a "peaceful racist group," which prompted laughter and a few yells of "Freudian slip!" from those assembled.

Modesto Mayor Ted Brandvold tried several times to restore order as Grundmann spoke, but the room was pandemonium for a period as Grundmann finished his speech, finger pointing at the crowd and his back turned to the mayor.

City Manager Joe Lopez read a brief statement reminding the audience that approval of the permit does not equal an endorsement of the event itself. Councilman Mani Grewal, who is running for the 5th Senate District seat currently held by lesbian state Senator Cathleen Galgiani (D-Stockton), did not make a statement. (One of Grewal's opponents for the Senate seat is lesbian Assemblywoman Susan Talamantes Eggman, D-Stockton).

Brandvold tried to hold the center throughout the meeting, suggesting that the city might offer a resolution in support of free speech while denouncing hate. He also began the meeting with a moment of silence for those who died in the recent mass shooting incidents in Gilroy; El Paso, Texas; and Dayton, Ohio.

These recent incidents of violence weren't the only ones invoked by speakers addressing the council. Mason spoke from the podium as well, condemning the planned rally and unequivocally referring to straight pride as a "white supremacist event," using his personal experiences with his adoptive parents as experiential proof that that description is accurate.

Centrally, Mason brought up the Charlottesville "Unite the Right" rally in 2017.

"I'm sure the leaders of Charlottesville, Virginia, believed that they were protecting free speech by allowing the 'Unite the Right' rally. But they still allowed white supremacists the opportunity to kill Heather Heyer," Mason said.

Heyer was a protester who was killed at the Virginia event when James Fields intentionally drove his car into a crowd of demonstrators. Fields was sentenced to life in prison earlier this year.

"Don Grundmann is a radical, right-wing fascist from the Bay Area," Mason went on. "He is attempting to use Modesto as a launching ground for his political and cultural campaign of hate. He is open in his war-like rhetoric," Mason said, asking that the permit be denied or that the city deny the group the venue of Graceada Park.

Mason told the Bay Area Reporter in a brief interview at the vigil he has been receiving "an outpouring of love and support, from all over the country."

Change of venue request
A request to change the venue of the event was a common element among those who spoke out against Modesto straight pride. Multiple speakers pointed out that the park is unfenced and situated in the middle of a residential area. Calling it the "gem of the city," several Modesto residents suggested other venues for straight pride, should it receive a permit, where possible clashes might be easier to contain.

Potential for violence was also a commonly discussed element, with several speakers mentioning Grundmann's invitation to the Proud Boys, a white nationalist group, to attend the event. BuzzFeed News reported that the Proud Boys declined the invitation.

Jessica Self, chair of the Stanislaus County Central Democratic Committee, addressed the council, asking whether the National Straight Pride Coalition had been truthful when it filed its request for a permit. She questioned its budget for security, its insurance, its bond, and whether it answered the form's question as to whether the event organizers anticipate political opposition. Self pointed out that organizations like hers would not forget who voted in support of this permit, as well as who declined to make a statement denouncing the event itself.

"I didn't get to say what I really wanted to say," Self told the B.A.R after the meeting. "I ran out of time. What I wanted to tell them was that every single member of the Charlottesville City Council had to resign within a year of 'Unite the Right,'" Self said.

Public comment continued long into the night, with opposition to the straight pride event outnumbering voices in support by a significant margin. The Modesto City Council did not hold a public vote on this issue, nor make any announcement as to their decision.

Updated, 8/19/19: In a tweet, Petrelis said he has canceled the August 24 San Francisco event due to the ongoing conversation taking place in Modesto. End of update.

Though Petrelis has dubbed his rally "straight pride," he said it doesn't mean the same as Grundmann's event or the similar straight pride parade planned for Boston on August 31.

"Why should they have all the fun?" Petrelis asked the B.A.R. in a phone interview, referring to the Modesto organizers. "How come they get to decide what straight pride is? I know they have a different homophobic agenda than I do. Here in San Francisco, I feel that we do have reason to make straight pride an opportunity to thank allies who've stood with us through the AIDS crises and other times."

He noted that his choice of a representative ally is the actor George Clooney.

Updated, 8/19/19: This article was updated to note the cancellation of a San Francsico event August 24.