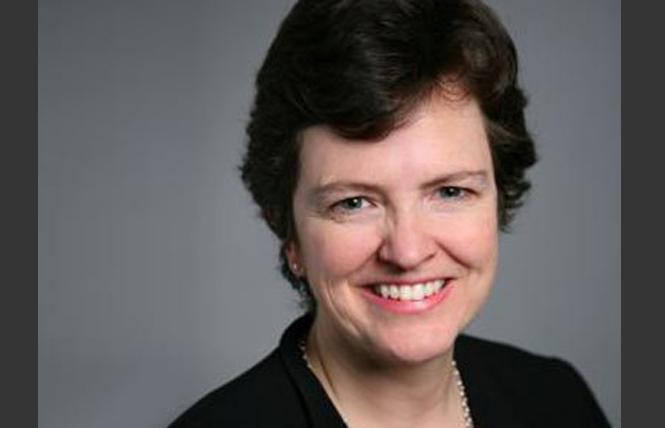 Mary Rowland was confirmed by the U.S. Senate to a federal judgeship.

The U.S. Senate last week confirmed lesbian magistrate Mary Rowland to a U.S. district court judgeship in Illinois, prompting the state's Democratic U.S. senators, Dick Durbin and Tammy Duckworth, to express appreciation for the Trump administration's "willingness to work with us and with our nonpartisan screening committee to reach consensus on nominees who will serve the people of Illinois well."

President Donald Trump nominated Rowland in June 2018 — his first openly gay appointee to a federal judgeship. The Senate Judiciary Committee recommended Rowland's confirmation by a 16-5 vote, but the nomination was never advanced to the full Senate. When the 2017-18 congressional session adjourned, Trump re-nominated most of his other yet-to-be-confirmed nominees, but Rowland's name was no longer on the list.

Then, in May of this year, the Trump administration re-submitted Rowland's nomination. The judiciary committee recommended her confirmation by a 14-8 vote, and the nomination sat on the Senate calendar until July 31. The nomination was approved along with about a dozen others, by a voice vote.

Rowland, 57, is a native of Ohio and attended University of Michigan and then University of Chicago Law School. She clerked for a federal judge in Michigan, and then worked for two years with the American Civil Liberties Union of Illinois. Since 2012, she has served as a magistrate judge for the U.S. District Court for Northern Illinois. The American Bar Association rated Rowland as "well qualified" for the position.

Rowland resides in Oak Park, Illinois with her spouse, Julie Justicz, and their two children. The questionnaire she filled out for the judiciary committee included mention that she is a member of the Lesbian and Gay Bar Association of Chicago and was a member of Lambda Legal Defense and Education Fund between 1992 and 2010. It noted she had made three presentations before the Chicago gay legal group and spoke to a law firm about her "path to the bench as an out lesbian" in June 2017. And she has worked on several Democratic campaigns.

At Rowland's confirmation hearing last August, Durbin introduced her, saying she was a "trailblazer ... inspiring a generation of LGBTQ attorneys who watched her break glass ceilings with fearlessness and determination." He and Duckworth welcomed "Mary's wife, Julie Justicz," to the hearing, noting that their children were off at school.

Trump's second openly gay nominee to the federal bench, San Diego attorney Patrick Bumatay, is still pending in committee. Trump initially nominated Bumatay in October 2018 to serve on the 9th U.S. Circuit Court of Appeals. Like that of Rowland, his nomination was also sent back to the president after the end of the congressional session. But when Trump re-nominated Bumatay in February of this year, his slotted him for a district court seat, not the appeals court. His nomination has not moved since.

Several court watch media outlets reported that Trump did not consult with U.S. Senators Dianne Feinstein and Kamala Harris, both Democrats from California, for nominees from that state, as is tradition. And they said both senators opposed Bumatay because he believes in a strict reading of the Constitution, an interpretation that often works against the interests of LGBT people. Several conservative news sources are speculating Trump might re-nominate Bumatay to a 9th Circuit seat that is expected to come open soon due to a retirement.