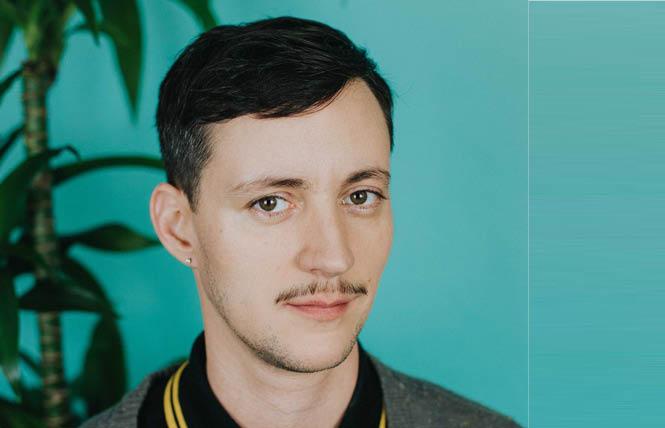 The backlash against Berkeley-born lesbian author Ariel Schrag's novel "Adam" first began back in 2013 with a series of Tumblr posts criticizing the book for its politics and content. The story is about a cisgender boy pretending to be a trans man in order to woo and have sex with a slightly older lesbian. Critics of the book pointed out that it perpetuates stereotypes about the LGBTQ community and indulges the trope of "corrective rape" wherein a lesbian is made to love a man after coercive or non-consensual sex.

Schrag did not respond to a request for comment.

Adapted by the author into an independent film with trans director Rhys Ernst, "Adam" premiered at the 2019 Sundance Film Festival and will open in theaters August 14. The film is now receiving some of the same backlash, with critics claiming the narrative is dangerously transphobic, lesbophobic, biphobic, and perpetuates rape culture under a queer aegis.

"Adam" stands in a particularly contentious place, with a trans director and featured performers including Chloe Levine ("The OA") and trans actress Mj Rodriguez ("Pose"). Director Ernst and others have defended the film against growing calls for a boycott by pointing out that trans actors are getting work in a trans story. One of the extras who worked on the film takes issue with that position.

In a detailed Twitter thread, user @cervine_salad (who told the Bay Area Reporter via email to call him Al, no last name given) detailed his experience as a background actor in the film, including being deceived about the title and nature of the movie and transphobic or ignorant treatment on behalf of the film's crew.

"There will always be an implicit power structure that would make it very difficult for trans people to speak up on set about injustices or microaggressions," said Al, a 26-year-old gender-nonconforming trans man in Portland.

Al also recounted a story wherein a crewmember shared their pain that their male cat was discovered to have undescended testes during a neutering operation and being misgendered as female, which the crewmember believed helped them understand the trans experience.

"This situation with the 'trans cat' story really never should have happened. It was a brief period on set where the crew and cast were gathered around a tree stump, with all listening, and anyone who wanted to get up and speak to the group were invited to do so. The production team seems to think that this was an attempt to create a safe and inclusive space for people to share their thoughts on the project and the day. But 'safe' is definitely not a word I would use to describe that space," Al said, noting that he was not aware that he had even been part of filming "Adam" until his paycheck arrived in October 2017, months after the film had wrapped.

In the original Twitter thread, Al described being repeatedly misgendered by the costume and production crew, and said that trans men were made to resemble and portray butch lesbians in large group shots. Ernst has denied this claim via a statement posted to Twitter, saying that "everyone on the crew had a 'Trans 101' guide."

To the B.A.R., Al was unequivocal about this being an unacceptable experience that ultimately mirrored the film's unacceptable content.

"You can't take wildly transphobic and lesbophobic source material like that, slap some Band-Aids on the bleeding wounds of the premise, and use the same title as said hated book and then somehow expect everyone to praise you for your 'complexity,'" he said.

Ernst has defended the film's content at length in a Medium essay, and Huffington Post, the Los Angeles Times, the Advocate, and other places, describing the backlash as a "war on nuance." Al was aware of these efforts, but unimpressed.

"His dogged attempts to defend this totally tone-deaf pet project are a huge slap in the face to countless LGBT people," he said. "Yes, they specifically recruited a very diverse LGBT cast. But they did it largely under what are clearly false pretenses, even to other experienced actors and filmmakers. We didn't know what we were signing up for, and that's exploitation."

Ernst, who also produced and directed for Amazon Studios' groundbreaking series, "Transparent," did not respond to the B.A.R.'s request for comment.

Publicist Rob Scheer emailed to clarify that the corrective rape that forms the conclusion of the book is not included in the film version, and pointed out Instagram posts from other actors involved in the film that present a more inclusive and affirming narrative about time on the set. Scheer also provided the film's Trans 101 guide to the B.A.R., which includes directives to call people by their preferred names, and to research rather than rely on trans people to educate.

Through an email from Scheer, producers James Schamus and Howard Gertler referred to some claims made by the film's detractors — such as the accusation that the film was reprimanded by the Screen Actors Guild, which was not mentioned to the B.A.R. — "plain and simple lies." While allowing that occasional misgendering may have happened, they argued that on-set culture was not to blame. They pointed out that Al's objections to his on-site treatment or the film itself did not stop him from returning to work the second day.

"At no time were we made aware of any such dissatisfaction with the experiences of the many, many trans crew, actors, and extras on set — a set presided over by, and in the service of, trans artists," the producers wrote. "We are genuinely perplexed that these charges are being leveled by someone who never made their discomfort known at the time to our dedicated assistant directing staff or anyone else, and to our knowledge never communicated any of this in the months and months following their participation in the making of the film, and we are additionally perplexed that, in contradiction to the impression left on social media, this person accepted an invitation to return to set for a second day later in the shoot, given their apparent objections to the film's very existence itself."

When asked by what mechanism extras might have made complaints, since those actors are not typically members of SAG or given access to communicate with filmmakers, they did not answer directly. Instead, they wrote, "The filmmaking team would have been happy to address any discomfort or issue with it at the time. The film's team was attuned precisely to these kinds of things — our Trans 101 guide, trainings, morning sharing circles, and constant checking-in were a great hallmark of the set. We can assert, as we have and will continue to do so, that the set was the most loving, inclusive, open, and trans-centered workplace we could create."

To read more opposing viewpoints or watch the trailer for the film, search #AdamtheFilm and #BoycottAdam on Twitter.

Updated, 7/29/19: This article was updated to correct the fact that actress Chloe Levine does not identify as trans and to clarify that the rep who responded was representing the filmmakers. The email from producers came through the rep.
.