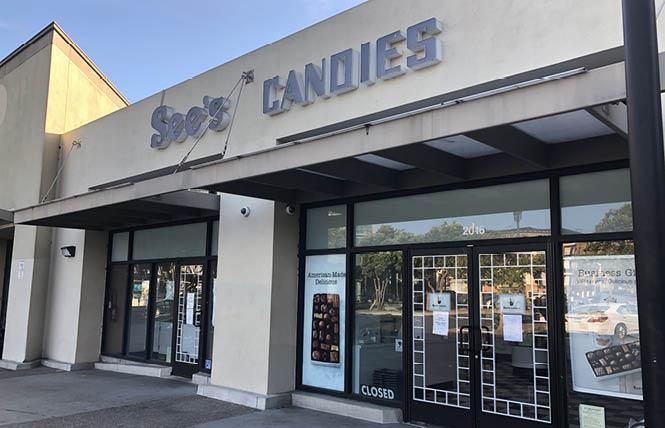 Five years after See's Candies moved into the Safeway shopping center in San Francisco's gay Castro neighborhood, the company is shuttering the location this weekend.

According to a sign posted on the door of the famed confectioner's fifth store in the city, located at 2016 Market Street, it will close for good at 6 p.m. Saturday, July 20.

"Our last day of business will be July 20, but don't worry! You can still get your favorite candies at our nearby shops," reads the sign, informing customers to either visit its retail shop downtown at 542 Market Street or its volume discount shop at 400 South Airport Boulevard in South San Francisco.

The founders of the 98-year-old company, which started in Los Angeles, sold it to Berkshire Hathaway in 1972. It is now headquartered in South San Francisco. A spokesperson for See's did not immediately respond to the Bay Area Reporter's request for comment Wednesday about why the company was closing the upper Market Street store.

The company made a splash when it opened the Castro location in August 2014 where a Mike's Camera store had been in the suburban-style shopping center at the intersection of Market and Church streets. It invited neighborhood leaders and residents to a sneak peek of the store before it opened to the public.

Despite it being a formula retailer due to having more than 11 stores nationwide, See's was seen as a good fit for the shopping center. Its retail space is located among several smaller storefronts built to the right of the Safeway grocery store and leased by other chain stores.

But crime and homeless issues have plagued the shopping complex for years. See's initially had stayed open until 9 p.m. most nights, but it changed its closing time to 6 p.m. due to a lack of customers and concerns about the safety of its employees working at the location after sunset, according to local business leaders.

Shoppers who stop by Saturday can receive a free lollypop, as the company will be marking National Lollypop Day. The store opens that morning at 10 a.m.

The closure is just the latest to hit the upper Market commercial corridor, which stretches between Castro Street north to Octavia Boulevard. Earlier this month Sausalito restaurant Sushi Ran closed its Izakaya Sushi Ran offshoot at 2223 Market Street, though another restaurant is reportedly set to open there in the coming months.

At the same time several new businesses have opened their doors, including this week's re-launch of Brewcade, the popular arcade and craft beer bar at 2200 Market Street that expanded into an adjacent restaurant space. It has rebranded as The Detour and now offers food, a full bar, and a larger selection of video games.

One block over at 2198 Market Street Willkommen, a new beer hall from San Francisco-based Black Hammer Brewing, opened in June. It moved into the intersection-fronting retail space on the ground floor of a relatively new mixed-use building.

In order to help landlords fill their vacant storefronts on upper Market Street, gay District 8 Supervisor Rafael Mandelman authored legislation to change the area's zoning. The new rules, which the Board of Supervisors is expected to approve by late July, are aimed at making it easier for eateries serving only wine and beer to open and allowing arts uses and community-serving nonprofits to lease ground floor retail spaces along the street.