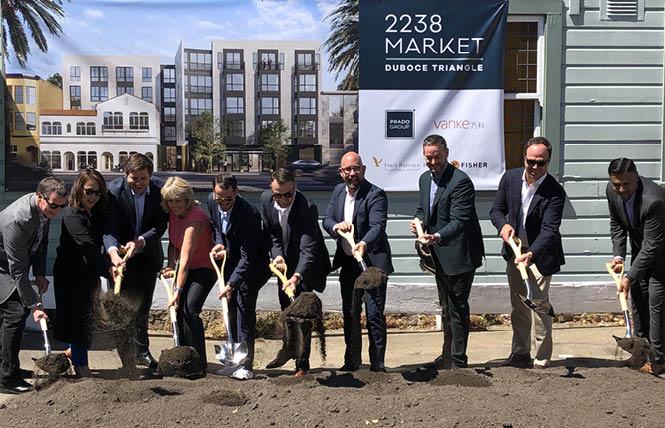 The developer had initially hoped to begin construction last summer on the site of the former Sullivan's Funeral Home at 2240 Market Street. Prado Group President & CEO Dan Safier noted his company first considered the development project more than a decade ago during his brief remarks at the July 12 groundbreaking ceremony.

"This project, like all the ones we work on here in San Francisco, takes a long time from start to finish to get done," said Safier, whose company also built the nearby 38 Dolores (at Market Street) apartment building that includes a Whole Foods grocery.

The new five-story, 72,000 square foot project will replace a portion of the existing mortuary structure and adjacent parking lot with housing, ground-floor retail spaces, and underground parking for 23 vehicles. The homes for sale will be a mix of studio, one and two bedroom units, and penthouses, as well as a townhouse with two units accessed from the property's 15th Street side.

"Our ethos as a company is to bring ground floor retail to the street rather than a car-centric parking lot," said Safier.

District 8 Supervisor Rafael Mandelman, a gay man who represents the Castro on the Board of Supervisors, helped turn over the first shovels full of dirt. He said the project would help revive that block of Market Street once completed.

"Development in San Francisco is not for the faint of heart but it is super important," said Mandelman, who is asking his board colleagues this month to adopt zoning changes aimed at making it easier to rent out retail spaces along upper Market Street. "It is important that there is activity on the sidewalk from new businesses and housing along this block of Market Street."

Construction is expected to take 18 months and there are no tenants yet for the retail spaces being built within the portion of the existing building that is being preserved. The storefronts are being marketed for either restaurant or retail uses.

"We are excited to get it going and to retain an historic structure," said Safier.

As the B.A.R. noted in a previous story about the site, LGBT historic preservationists had opposed seeing the existing building torn down. They contended the funeral home was one of the few in the early days of the AIDS epidemic of the 1980s to accept the bodies of those who had died.

The Citywide Historic Context Statement for Lesbian, Gay, Bisexual, Transgender and Queer History in San Francisco cited Sullivan's, along with the Neptune Society, as "reportedly a few of the first to offer services to those felled by AIDS" but did not include the Market Street building in a list of properties it suggested deserve some form of landmark status.

Prado hired Architectural Resources Group, headed by Charles Chase, a past president of the San Francisco Historic Preservation Commission, to do a historic resource evaluation of the site. It concluded that the claim about the mortuary in relation to the AIDS epidemic was "a significant overstatement."

Nonetheless, Prado agreed to maintain the building's facade and terra cotta roof and incorporated both into the design of the housing development. It also worked closely with the Duboce Triangle Neighborhood Association to fine tune its plans for the site after the residential group voiced concerns about the initial designs.

"We are really excited to see it kick off," he said.