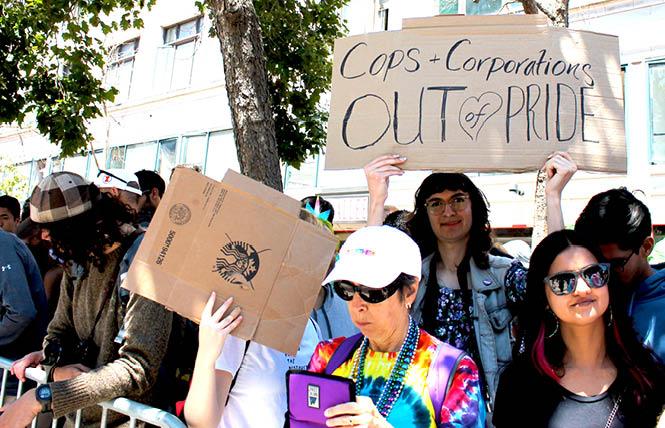 Sylvia, center, raised their sign "Cops + Corporations Out of Pride" along Market Street during Sunday's San Francisco's Pride parade after other protesters halted the event for about an hour. Photo: Heather Cassell

Protesters demonstrating against police and corporate participation in the San Francisco Pride parade delayed the 49th annual march for about an hour Sunday.

A half hour after the festivities started at 10:30 a.m., with Dykes on Bikes roaring up Market Street, a small group of protesters broke through the barriers along the parade route, stopping the motorcycle contingent at Market near Sixth Street. The protesters' arms were interlocked, covered by rainbow painted pipes as they spread themselves across the street.

The coalition's statement was sent by Abolish ICE SF, which did not claim responsibility, on Facebook Messenger at 5:53 p.m. last Tuesday.

The group clarified the parade was halted by "autonomous organizers rather than being a product of a structured organization."

Members of the autonomous coalition named in the statement, along with Abolish ICE SF, were Janetta Johnson and TGIJP, the organization she leads, along with members of Back Lives Matter Bay Area, Gay Shame, No Justice No Pride DC, and the Still Here Collective in Sacramento. The coalition also included San Francisco Bay Area residents and those who have been displaced from the Bay Area, "and people around the world affected by police, colonial, capitalist, and militarist violence," according to the statement.

The coalition stated it delayed the Pride parade for 50 minutes to "commemorate the 50th anniversary of Stonewall."

"We refuse to allow the true origins and spirit of Pride to be forgotten and erased" through "corporate and state/city co-opt-ion," the coalition said. "We chanted, danced, held up banners, and protected a smaller group locking down across the path of the parade."

Arms locked and covered by rainbow painted pipes the demonstrators spread out across Market Street near Sixth Street halted the parade for nearly an hour, reported CBS News.

"We disrupted commercial Pride to honor and continue the legacy of our militant trans and queer ancestors, who fought, loved, and rioted to make room for our existence today," the coalition stated.

The coalition listed eight demands from SF Pride and the community, expanding upon the six demands listed on a blue flyer handed out during the parade. Coalition members called for no corporate or police participation in SF Pride; protection of "marginalized LGBTQ2S" and black and brown, queer and transgender community members; an end to citywide sweeps of the homeless; make Pride accessible to disabled communities; Pride organizers to acknowledge Ohlone land; immediate release of incarcerated transgender people in San Francisco's jail; and LGBT and organizations who work with queer people not to participate in Pride until "cops and corps are kicked out."

A CBS News chopper flying over the incident where San Francisco police officers had gathered to monitor the demonstrators sitting in the street captured that scuffle.

Khrissa Pascual, a parade spectator, said that the protesters were chanting, "We are the enemies of the police."

Pascual said that she watched as police and San Francisco Pride organizers negotiated with the protesters to get the parade started again.

"At approximately 12:01 p.m. the protesters agreed to leave the street and reopen the parade route," SFPD stated.

Police said that two people were taken into custody. Taryn Saldivar, 21, of Oakland, and Kenneth Bilecki, 27, of Santa Rosa.

Saldivar was charged with battery on a police officer, resisting arrest, and interfering with a parade route.

Saldivar and Bilecki were released late June 30, Abolish ICE SF and the SFPD confirmed, but no time was provided.

"Saldivar was released and transported by ambulance for non-life threatening injuries," Officer Robert Rueca with the SFPD media relations office wrote in an email to the B.A.R.

In the statement, the coalition spoke out against how the police handled the protest rally and the mistreatment of two of the demonstrators.

The coalition claimed that one of the protesters who used a cane was immediately hospitalized due to the "severity of injury inflicted upon them by SFPD."

The demonstrator who used a cane was allegedly "slammed into the pavement several times," and "dragged across the street," according to the coalition's statement. They were "held in a twisted position for half an hour with their pants pulled down" and received no medical attention or assistance by police or SF Pride safety team members as the crowds looked on.

The CBS chopper did capture a demonstrator lying on the street surrounded by police officers who were attempting to remove the individual during the incident.

The B.A.R. reached out to SF Pride officials but didn't receive a response by press time.

"We are pissed off that Pride is partnering up with corporations and police departments that are killing transgender people, particularly black transgender women," Sylvia, a nonbinary transgender person who didn't want to disclose their last name, told the B.A.R.

They added that demonstrators were also speaking out about the city "clearing the area of homeless queers and gentrifying the neighborhood so straight tourists can come get drunk and have a fun time."

Tensions have been rising in recent weeks, with Google employees requesting the San Francisco LGBT Pride Celebration Committee board to ban the tech giant from marching in the parade. The employees were angry over Google-owned YouTube's lack of enforcing anti-harassment policies against monetized channels directing anti-gay abuse toward the LGBT community.

The SF Pride board took no action on the request and Google had a contingent in the parade. 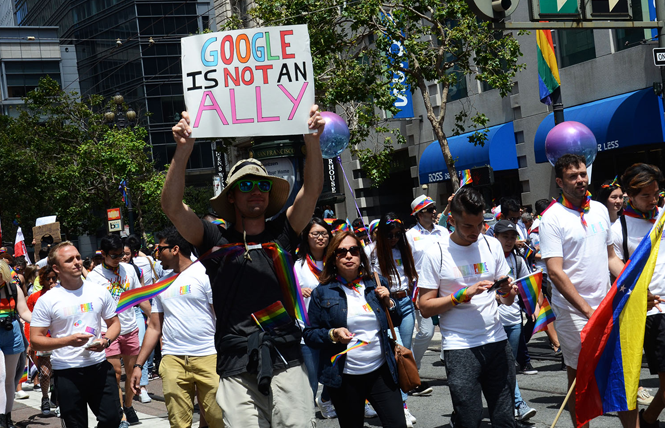 Members of Gay Shame have also been pressuring SF Pride to dump corporations and police participation in the event in an effort to return the parade to its roots of the Stonewall rebellion in New York City 50 years ago, according to the group's Facebook page. As the B.A.R. reported last week, Gay Shame claimed responsibility for graffiti reading "Police out of Pride" that appeared in the Castro this spring.

KQED reported that the crowd surrounding the demonstrators chanted, "We support you."

However, the crowd also thanked police, stating they supported them as the parade resumed and cheers erupted.

At one point, someone in a contingent led a call and response, "When police get attacked what do we do? We fight back!" into a bullhorn as it started walking up Market Street again.

This was an ironic turn of events considering that Pride marches were launched in the aftermath of the Stonewall riots in which police raided the New York City gay bar.

For the most part, onlookers beyond the site of the demonstration didn't know why the parade had stopped or that there was a protest happening.

The parade was still going on, with contingents lined up at Main and Beale streets waiting to walk up Market Street when this reporter walked back to the Embarcadero at 2:38 p.m.

Updated, 7/2/19: An earlier version of this article reported that it was someone in UNITE HERE, the hospitality workers' union, that led the call and response chant referring to police. That was incorrect. A person did lead that chant, but it is unclear which contingent they were with.

Updated: 7/8/19: This article has been updated to include comments from a coalition that issued a statement July 2 claiming responsibility.