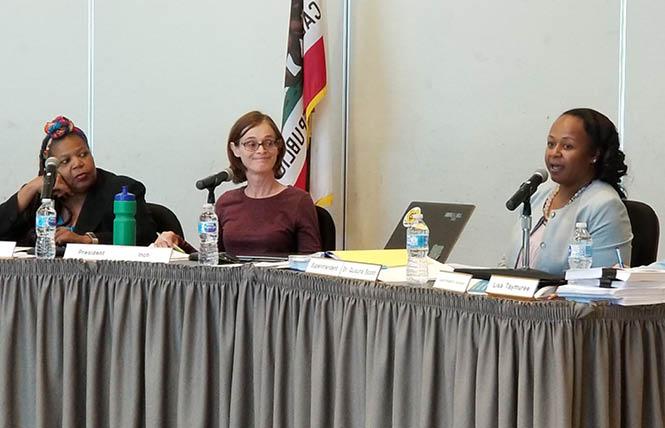 The Emery Unified School District board president resigned Friday, two days after the board declined to name a new high school gym after a trans man.

Speaking by phone with the Bay Area Reporter, former president Barbara Inch said that her decision to resign was not related to the vote in any way that she would like to discuss. Inch was elected to the board in 2016 and slated to serve until 2020.

The meeting Wednesday, June 26, opened with a reading from the U.S. Supreme Court's Obergefell marriage equality decision, described as an "inspirational quote" on the printed agenda. An emotional Sarah Nguyen, a lesbian who's on the school board, read the quote. She prefaced the reading with a personal announcement that June 26 was the anniversary of Obergefell, as well as her fourth anniversary with her wife.

The reading set the tone for an emotional and tense meeting wherein the board voted to name the gym after 38-year Emery High School employee Elio Abrami instead of Steve Dain, a trans man who was fired by the district years ago after he transitioned on vacation.

Inch recapped the process that led the small district to this potentially historic moment.

Emeryville Vice Mayor Christian Patz (Inch's husband and a former school board member) proposed in 2015, and again in January, that the new gym and sports complex be named after Dain. A 10-year employee of Emery High and former teacher of the year, Dain was fired in 1976 for returning to work after having transitioned.

This year the school board took up the recommendation and decided to open up the nominations process to determine whether a more suitable candidate existed for the honor. Through April and May, the board received 56 submissions of 12 names, holding two public hearings in that time and receiving public comment. In addition to Dain and Abrami, both of whom are deceased, nominations included Golden State Warriors star Stephen Curry and the Ohlone community, as well as a handful of other individuals, some still living and currently employed by the district.

At the June 26 meeting, the names were read in alphabetical order before the board announced that it would vote by ranked choice. An earlier procedural plan to narrow the field to three nominees was not enacted.

Public comment followed and three family members who had previously spoken on behalf of Abrami did so again, largely reiterating points they made at the June 12 meeting. Three people: Patz, and City Council members Scott Donahue and Dianne Martinez, spoke on behalf of Dain.

Martinez, who stressed to the B.A.R. that she was speaking as a member of the community and not in an official capacity, reminded the board that it had an opportunity to stand out.

"We have a chance tonight to make history by naming a municipal building after a transgender hero, and I hope you will take that step," Martinez said.

School board Vice President Brynnda Collins took specific issue with what she deemed "political" pressure applied to the vote.

"Steve Dain was the best candidate until other people came to the table. But the nomination for Steve Dain is political. We don't want to make history or the newspapers by naming our gym. We want to make history with our test scores. The person this gym is named after needs to be a pillar of the community. It's about community, not politics," Collins said.

From the audience, Patz spoke audibly but not at a disruptive volume. "That's transphobia right there," he said.

Visibly upset, Inch rebutted Collins' assertion, pointing out that Dain's name and legacy were interrupted by his illegal termination. (Dain sued the district and won about $19,000, according to court records.)

"There is a narrative in this country that if you work hard enough you will succeed. If you are a good person you can overcome adversity. Steve Dain worked hard. Steve Dain was by any measure a good person," Inch said at the meeting. "He was not given the opportunity to continue the great work he did at Emery. Hard work and being a good person was not enough in the face of discrimination and bigotry. To change someone's mind from hatred and fear is not a one-person job."

Board members Vargas and Donaldson sidestepped the central issue of the vote, choosing instead to applaud the level of community involvement and to indicate that there is some other honor more suitable for Dain. On this last point, Nguyen agreed.

"Restorative justice calls for reparations that are aligned with the harm that was caused," she said. "It appears from my observation that the harm that was caused came from a lack of knowledge, understanding, and relationship. Honoring Steve Dain in a way that is aligned to the harm feels right to me. My concern is that naming the gym [after Dain] won't give us the opportunity to build the knowledge and community that comes with getting to know members of the LGBTQ community for who they are," she said.

Nguyen did not offer any idea of what another effort might be. She then announced her formal support for naming the gym after Abrami.

Following the board members' comments, they made their votes by ranked choice. Collins was the only member not to choose Dain for any of her three choices, casting her second choice for Curry. With a majority of first-choice votes, Abrami was selected as the honored individual. When voting to carry the motion to name the gym after Abrami, Inch entered the only dissenting vote.

Inch, a straight ally, wrote in an email to the B.A.R about the outcome of the vote.

"The vote disappointed me more deeply than I expected," she wrote. "The fact that it took four years from when it was first proposed let me know it would be a close vote. Members Vargas and Collins pushed back on the naming with the help of the past Superintendent John Rubio since they joined the board. It was clear they wanted to find any other name. I was shocked and confused by member Nguyen's comments and reasoning."

Inch submitted her resignation via letter to Superintendent Quiauna Scott. Scott's office told the B.A.R by phone Friday that she is out of town and unavailable for comment. The Emery school board is not in session for the remainder of the summer and has not issued any statement or updated its website on Inch's resignation.

Updated: 8/10/20: This article has been updated to note that while Christian Patz previously served on the school board, he was not president of the body.

Emeryville 'undertaking all the necessary work' to rename street for trans teacher
Sign up!