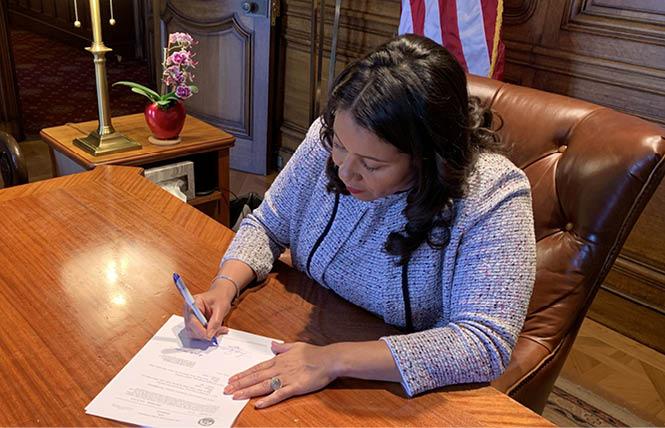 With the stroke of her pen Tuesday, June 25, Breed added 524 Union Street to the list of San Francisco properties deemed to have historical significance. It is the city's fourth LGBT historic site and is believed to be the first landmark in the country to focus on an early queer eatery.

For nearly 180 years the property has housed restaurants, most notably the Paper Doll, which is considered to be the city's first restaurant and nightclub catering to the gay community. Opened in 1944 by Tom Arbulich, the Paper Doll's lesbian staff offered a welcome watering hole to queer patrons.

By the mid-1950s gay men had claimed the space as their own, leading to a court fight over the suspension of its liquor license waged by then owner Dante Benedetti, a straight man. He lost his legal battle and later sold the bar; in the late 1960s and early 1970s the late Bay Area Reporter founding publisher Bob Ross had two stints operating restaurants there.

According to research done by the current owners, the Smucha family who pushed to landmark the site, and architectural historian Shayne Watson, founding chair of the GLBT Historical Society's Historic Places Working Group, Ross' The 524 eatery "hosted pioneering events by every local homophile and LGBTQ rights organization of the era," as the GLBT Historical Society noted in a news release after the city's Board of Supervisors finalized its approval for landmarking the site June 18.

A president of the Tavern Guild, an association for LGBT bar and restaurant owners, Ross founded the B.A.R. at the site in 1971, according to the historical society, and also "hosted early gay voter organization efforts, playing an unheralded role in shaping LGBTQ activism and politics."

"It's exciting to have this historic treasure landmarked during Pride Month in San Francisco," stated Terry Beswick, the archival group's executive director and a former B.A.R. assistant editor. "We're proud to have played a role in the preservation of the Paper Doll. Given that it was the target of anti-gay police raids for much of its existence, I would consider it an example of restorative justice for it to reopen a LGBTQ-friendly restaurant and bar."

By the 1980s the restaurant space lost its gay affiliations and was home to a number of establishments that catered to mostly straight clientele. After a French restaurant shuttered in 2012, permit issues have hampered seeing another eatery open in the space.

The Smucha family sought the landmark for their property's cultural importance to the city's LGBT community after reading about it in the Citywide Historic Context Statement for LGBTQ History in San Francisco that was adopted in 2015. They then did their own additional research and reached out to Watson, who co-authored the city report, to assist them in seeking the landmark status for the building.

"We knew about its LGBT connections and importance to people," said Barak Smucha, a third-generation San Franciscan whose family acquired the property in the 1970s, during a hearing earlier this month before a Board of Supervisors panel. "The magnitude of it and the crossroads was new to us from reading the planning department's citywide context statement."

The Smucha family would like to lease it out to a restaurateur that will honor its history. They are also looking into seeking both state and federal listing of the property as an historic site.