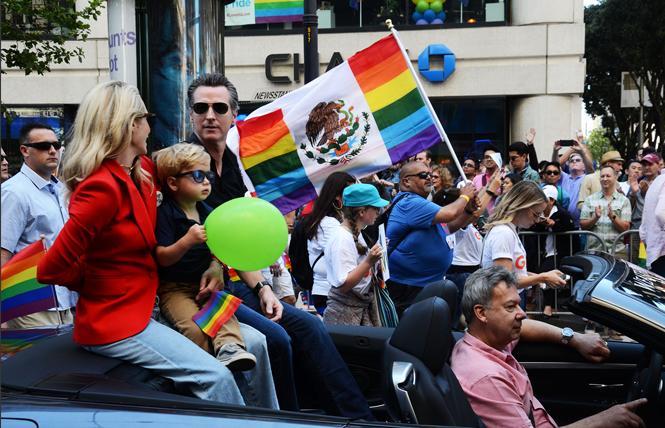 California Governor Gavin Newsom is set to make history as the first sitting governor to march in the San Francisco Pride parade. The LGBT celebration will take place Sunday, June 30.

As the city's former mayor and onetime member of its Board of Supervisors, Newsom was a regular participant in the parade, which is marking its 49th anniversary this month. He also regularly had a contingent while serving as the state's lieutenant governor.

Wednesday Newsom emailed constituents to invite them to march with him and his family in this year's parade, which is commemorating the 50th anniversary of the Stonewall riots at the New York City gay bar. The uprising against police brutality gave birth to the modern gay rights movement and the first Pride parades in 1970.

"California is sending a clear message that we are welcoming and inclusive to all, regardless of how you identify or who you love. And what better way to show our pride for love, acceptance, and equality than locking arms together at the San Francisco Pride parade later this month," wrote Newsom.

In an emailed response to a question from the Bay Area Reporter, San Francisco Pride officials confirmed that none of the state's governors over the last five decades — Republicans George Deukmejian, Pete Wilson, and Arnold Schwarzenegger, and Democrats Jerry Brown and Gray Davis — had marched in the parade.

"None of Governor Newsom's predecessors have marched in the SF Pride parade. We are excited to have him!" wrote Pride spokesman Fred Lopez.

It appears Newsom will become the first sitting governor of the Golden State to take part in any of the Pride parades held by California cities. Several LGBT leaders contacted by the B.A.R. could not recall a previous governor taking part in a Pride parade, and an online search did not bring up mention of any of Newsom's predecessors marching in one of the parades.

This week, Newsom made history by raising the rainbow flag Monday (June 17) above the State Capitol for the first time in honor of Pride Month. It marked the first time the symbol for the LGBT community had flown above the building since state legislative leaders briefly flew it October 11, 1990 in honor of Coming Out Day. As the B.A.R. reported at the time, Deukmejian ordered the flag be taken down a few hours after it went up.

And on June 4, Newsom also issued the first proclamation declaring June 2019 as "LGBTQ Pride Month" in the State of California. It stemmed from Brown last year signing into law a bill by gay Assemblyman Evan Low (D-Campbell) that requires the state's governor to annually declare June as Pride Month.