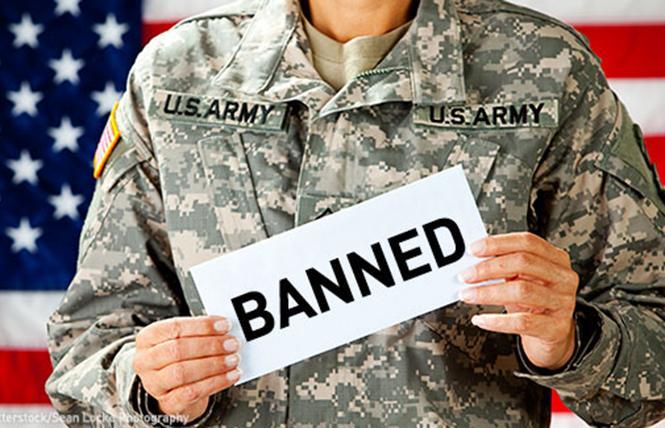 A federal appeals panel in Seattle ruled Friday that President Donald Trump's ban on transgender people in the military "treats transgender persons differently than other persons," but it did not reinstate an injunction against enforcement of that ban. Instead, the three-judge panel of the Ninth Circuit U.S. Court of Appeals ruled that the Trump ban "must be evaluated ... with the appropriate deference due to a proffered military decision."

The unanimous ruling sends the case once again back to the federal district court in Seattle and strengthens the prospects of the Trump administration withholding documents which attorneys challenging the ban sought to develop their case.

While the ruling is a setback for those challenging the transgender ban, Lambda Legal's Legal Director Sharon McGowan found a silver lining. She noted the panel rejected the Trump administration's claim that it was not targeting transgender people but people with a medical condition (gender dysphoria). That, she said, requires the district court to apply heightened judicial scrutiny of the Trump administration's justification for the ban.

"It also made clear that the district court was entitled to evaluate this discriminatory policy through a full presentation of the facts," said McGowan, "which we are eager to make."

The National Center for Lesbian Rights and GLBTQ Legal Advocates & Defenders also focused on the positive. They said the heightened scrutiny would make it harder for the Trump administration to justify the ban. They noted, too, that the Karnoski ruling would apply to the Stockman v. Trump challenge they have pending in the Ninth Circuit.

"This is a hugely positive development," said Jennifer Levi, director of the transgender rights project at GLAD. "The Ninth Circuit recognized that [the ban] clearly targets transgender people and that the government faces an uphill battle in justifying it."

NCLR's Shannon Minter said the ruling provides a "clear roadmap for striking down this discriminatory ban."

The lawsuit, Karnoski v. Trump, is one of at least four challenging Trump's ban on transgender servicemembers and is led by Lambda Legal and Outserve-SLDN. The lawsuit, representing nine active duty and prospective members of the military, argues that the Trump ban violates transgender servicemembers' constitutional right to equal protection, due process, and freedom of speech.

The appeals panel said that, "the President must be given the opportunity to invoke [executive privilege] formally and make particularized objections to 'show that the interest in secrecy or nondisclosure outweighs the need'" plaintiffs have for seeing the documents.

President Trump's ban on transgender people in the military, which he initiated with a posting on Twitter in 2017, went into effect in April of this year even as it was under challenge through several lawsuits. The ban, which had gone through several revisions while under legal challenge, bans from service any person who has been diagnosed with or treated for gender dysphoria, or who has had any sex reassignment surgery. Transgender people already in the military are allowed to stay, as long as they present themselves as the gender listed as their biological sex at birth.

The Trump administration has attempted to assert executive privilege as a means of withholding documents in a number of lawsuits, including those challenging an immigration status question on the 2020 census. The concept of executive privilege is not explicit in the constitution, but courts have held that it is an implied right of the president and executive branch to protect national security needs and the ability of the president to consult privately with his administration leaders in developing policies. However, in a 1974 decision in U.S. v. Nixon, a unanimous U.S. Supreme Court held that the need for the privilege has to be weighed against the impact of such privilege on "the fair administration of criminal justice."