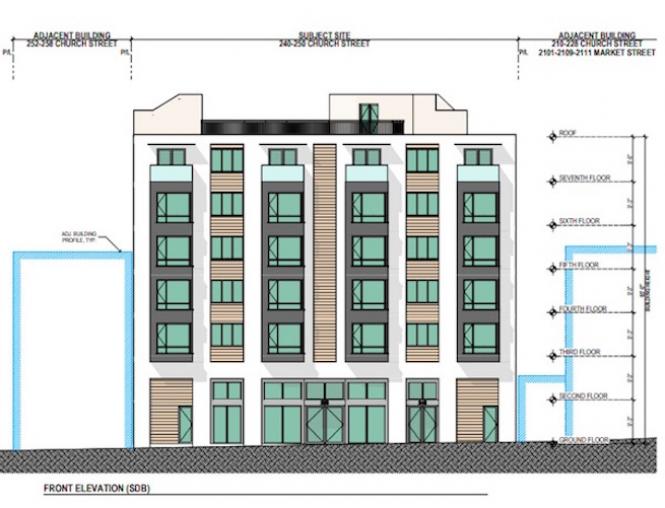 A rendering of what the new building at 240-250 Church Street could look like when complete. Courtesy SF Planning Department

A developer is seeking permission to demolish the brick building that for years had housed Sparky's Diner on Church Street in San Francisco's Castro district in order to build housing above ground floor retail.

According to documents filed with the city's planning department, the new $4 million building at 240-250 Church Street would have 22 housing units, two of which would be affordable, and street level retail space. The seven-story, 65 foot project would take advantage of the state's housing density bonus program and does not include vehicle parking.

Six of the units would be one-bedrooms, the rest two-bedrooms. The project application was filed June 7, triggering a 60-day deadline by planners to review it. Property owner Ty Bash said Monday (June 10) he was unsure how long the regulatory review would take, as he is just starting the process.

Nor was he certain if his proposal to demolish the existing structure, built in 1917, would face opposition. It is not considered a historic resource, noted Bash, adding that the 5,146 square foot parcel would be better utilized for in-fill housing.

"We have a housing shortage in our city, and we should encourage construction of affordable-by-design homes," said Bash.

While the 24-hour restaurant that had operated at 242 Church Street closed in February 2016, Thorough Bread and Pastry at 248 Church Street remains open. Bash said he would like to maintain the bakery as a tenant in the new building, which would see the current 3,700 square feet of retail space be reduced to 1,725 in order to allow for the lobby entrance for tenants. The new storefront would be built in the middle of the building with the housing entrance built to the right where the bakery's space currently is.

"I would love for the current tenant Thorough Bread to remain," Bash said. "I am hoping they will."

The property abuts in the back 2135 Market Street, the former Open Bible Church building. That project is also seeking to make use of the State Density Bonus Law in order to demolish the existing structure and replace it will a new building consisting of 30 dwelling units all three-bedrooms or larger above ground floor retail, with three set aside as affordable.

And directly across the street at 2140 Market Street plans call for demolishing the Lucky 13 straight dive bar to make way for a 33-unit housing development, which would also take advantage of the state density bonus program and have three affordable units. The two projects have faced neighborhood opposition since first being proposed in the fall over the height of the buildings and limited below-market-rate units.