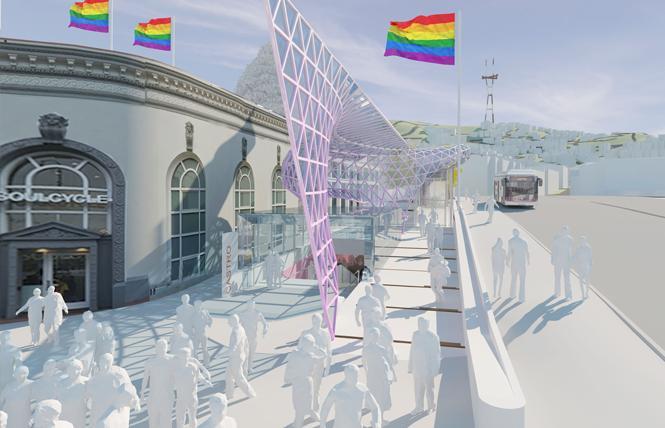 Adding to the issues proponents behind overhauling Harvey Milk Plaza in San Francisco's Castro district face is now opposition to the project from a major LGBT group in the city.

The GLBT Historical Society Thursday came out against the proposed plans to rebuild the public parklet above the Castro Muni station. The project, estimated to cost at least $11 million, would reconfigure the sunken entrance into the transit station so that it is flush with Market Street and has added features memorializing Milk, a global LGBT icon who was killed in 1978.

Milk became the first gay person to win elected office in San Francisco and California in 1977 when he won a seat on the city's Board of Supervisors. Following his death, city officials dedicated the plaza above the Castro station in his honor.

Situated at the corner of Castro and Market streets, the plaza is considered the front door to the neighborhood. But the windswept, sunken area is a largely uninviting space rarely used by the public other than for special events and protests. It has also become a gathering spot for homeless individuals.

The current plans for the area call for raising the terraced gardens to street level and creating a new belowground exhibit space adjacent to the Muni fair gates where Milk's story could be told. The proposal has been controversial from the start and is opposed by the architect that initially designed the plaza, Howard Grant, who later came out of the closet as gay.

Others have voiced concern that a planned canopy will obstruct views of the 1922 Beaux-Arts building at 400 Castro Street, designed by Edward Foulkes, and a mural painted on it that depicts a historic Victorian across the street.

For Harvey Milk Day, which is held annually on May 22, which was Milk's birthday, the Friends of Harvey Milk Plaza group and the architectural firm released a revised design and video for the plaza redo. It depicted the canopy in pink cut into triangular shapes, reminiscent of the LGBT community's lambda symbol, holding up see-through panels. It appears to be billowing in the wind like the adjacent oversized rainbow flag currently installed at the plaza.

The final design, however, is still to be determined as the project's supporters continue to gather public input and seek approval from a host of city and transit oversight bodies. The historical society is the first local LGBT nonprofit to take an official stance against the project.

In a statement released Thursday (June 6), Executive Director Terry Beswick stated this his organization would prefer seeing "a restoration, renovation, and limited adaptation of the existing historic design" for the plaza instead of demolishing it.

"We support the efforts of the city and county of San Francisco to undertake the work necessary to bring the space into full compliance with the Americans with Disabilities Act and we congratulate the Friends of Harvey Milk Plaza and its supporters on their work to bring attention to the plaza," stated Beswick. "However, after careful consideration of the proposed demolition and complete redesign of the space under consideration by the city, the society instead favors preservation and restoration of the existing historic plaza with limited adaptation of the original design to ensure ADA compliance, to allow for appropriate arts and history installations and to address other functional considerations."

He added that the historical society, which is aiming to build its own permanent museum somewhere in the city, would like to see the city "refocus funding and to organize efforts to restore, refresh, and make accessible the original design of Harvey Milk Plaza and the surrounding area with the utmost respect for the spirit of Harvey Milk and the history of the Castro neighborhood."

Brian Springfield, a local architect based in the Castro who is a main leader of the Friends of Harvey Milk Plaza group, told the Bay Area Reporter the society's decision is disappointing.

"Obviously, I am disappointed. We've reached out to the historical society and had conversations with them," he said. "As recently as March we discussed exchanging formal letters of support between our projects, so this really kind of came out of left field."

Longtime LGBT rights advocate Cleve Jones, who was friends with Milk and lives in the Castro, told the B.A.R. he, too, was disappointed by the society's position, noting that it has had every opportunity to be engaged in the yearslong design charette for redoing Milk plaza. He supports the plaza redesign proposal and the LGBT museum project and wishes the two groups could find a way to work collaboratively on both.

"I think this will be perceived as a way for the historical society to sabotage a project they conceive as competing with theirs," said Jones. "This scarcity mentality we need to move beyond. Everyone involved has to step up their game."

Grant, who has been calling for smaller enhancements to the plaza he designed, told the B.A.R. via email late Thursday night, "I have hoped the GLBT Historical Society would take a position on the Friends of HMP's relentless determination to demolish & replace the historically significant plaza."

He added, "It has been a mystery to me why this organization would come to the defense of hamburger joints in the Castro and ignore the biggest controversy over a historical site like the plaza."

In an email to the B.A.R. last month, Grant asked if a better use of the $11 million would be to "purchase the SoulCycle building and turn it into an LGBTQ museum featuring Harvey Milk memorabilia? Its location next to a renovated Harvey Milk Plaza would be perfect! No demolition!"

When any construction at the plaza will occur remains to be seen. The city's public works department is handling the design of the new elevator set to be added to the Castro Muni station, which has been delayed due to the community's desire to see it include a fourth stop flush with Market Street. Initially it was to have three stops, two inside the Muni station and one accessible from Castro Street.

As the B.A.R. noted in a story last month, the city agency doesn't know what the price tag for the elevator will be since it is still being designed. Nor is it clear who will pay for the additional stop; the city could either absorb the cost or require the friends group to foot the bill.

It also is uncertain where the plaza friends group will find the money to pay for its plans for reimagining the parklet. Nonetheless, Springfield told the B.A.R. Thursday that the community does need to come to a decision on what the plaza will look like after the new elevator is installed, likely sometime in late 2020 or early 2021.

"Because of the SFMTA elevator project, change is coming to Harvey Milk Plaza whether any of us are ready for it or not," he said. "After the place is torn apart to put in this elevator, when it is put back together how do we want it to look like and how do we want to honor Harvey Milk?"

The plaza group will be showing off its current design for a remodeled Milk plaza during Thursday's Castro Art Walk from 6 to 9 p.m. at 541 Castro Street. To see the designs online, visit https://www.harveymilkplaza.org/.