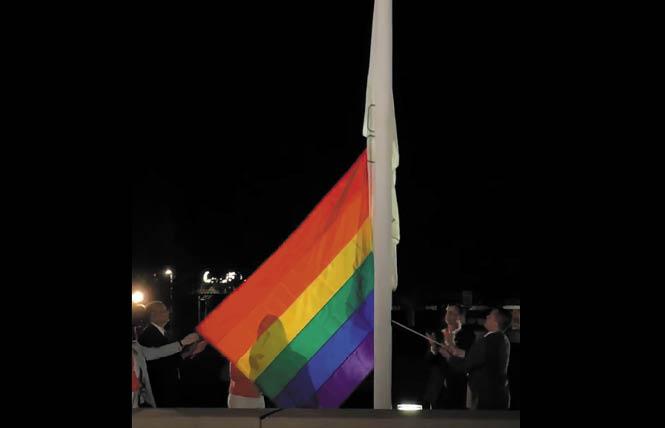 The city councils of Dublin and Tracy voted Tuesday night to fly the rainbow flag in recognition of June being Pride month.

Both flag requests were brought by gay freshmen councilmen who were elected in November as the first LGBT people to serve on their city's governing bodies. And both generated heated debate between those opposed and in support of seeing the LGBT community's symbol be flown on flagpoles in front of the two cities' city halls.

Pinole's City Council also voted 4-1 Tuesday night to fly the rainbow flag for the first time. The city raised the flag Wednesday morning and will keep it up through the end of June.

Last night, the City of Pinole voted to join the growing list of cities in the Bay Area & #AD15 who are flying the #LGBTQ+ rainbow flag in recognition of #Pride! Thank you, Pinole! ?????????? pic.twitter.com/OELMAc9rjc— Buffy Wicks (@BuffyWicks) June 5, 2019

And in Piedmont, the City Council voted Monday night to fly the flag for the first time at the request of bisexual City Councilman Tim Rood, who brought up the matter following what happened in Dublin. The city flew the flag Tuesday in front of a police station and will keep it up for the rest of the month.

In the case of Dublin, the East Bay city's five-person City Council had unanimously voted May 21 to issue its first proclamation in support of Pride. But on a 3-2 vote it denied a request from gay City Councilman Shawn Kumagai to also raise the rainbow flag on one of the three flagpoles in front of City Hall.

Following a week of intense backlash from across the country, City Councilman Arun Goel and Dublin Mayor David Haubert announced they had changed their minds about flying the Pride flag. LGBT Dublin residents and their allies nonetheless held a protest Saturday, June 1, at the city's flagpole, where they brought their own rainbow flags to put pressure on the council to fly it on a city flagpole.

At its June 4 meeting, where Haubert wore a rainbow sash that said "mayor" he had been given when marching in Boston's Pride parade with a contingent of other mayors from across the country, the council adopted an outdoor flag policy paving the way for the city to fly the rainbow flag for the first time. The vote came after an hour of public comment that overwhelmingly was in support of the flag policy, while those opposed refrained from using outright homophobic remarks as had happened two weeks ago.

"No gains will have ever been made for the LGBTQ community if it weren't for the changed hearts of allies," said Kumagai, who wore a rainbow heart on his suit jacket.

The council then held a second, special meeting to vote on when to fly the rainbow flag. Kumagai last month had initially sought to have the Pride flag be raised for the entire month of June but then sought a compromise proposal of having it be flown one day, which also failed to gain support.

This week the council voted unanimously to raise the flag Tuesday night immediately after it recessed its special meeting and to leave it up through July 3. It plans to hold a formal ceremony June 22.

Emeryville will fly a second rainbow flag at its City Hall on behalf of Dublin at a ceremony this Saturday, June 8. Gay City Councilman John Bauters pushed for the solidarity gesture and also reached out to Haubert last month to talk to him about why his handling of the flag issue had been problematic.

This edition of #OtterThoughts asks: What are you doing to celebrate #PrideMonth ? #LGBTQ #Pride2019 ?????????? pic.twitter.com/9qghkRpiLf

In response to one woman who criticized Haubert Tuesday night for being silent about the homophobic and transphobic comments voiced at the prior council meeting two weeks ago, he issued an apology and said his remaining silent was "inexcusable" and that he had "missed an opportunity" to denounce the remarks.

"I am sorry," said Haubert early on in the meeting.

Later in the evening Goel said he felt "accountable and responsive to everyone. It is why I feel even more this commemorative flag policy should exist."

Kumagai also said he had failed at the prior hearing "to fully explain the significance of the Pride flag; for that I apologize."

The city councils of Hercules and Antioch will both vote June 11 on also raising the Pride flag. 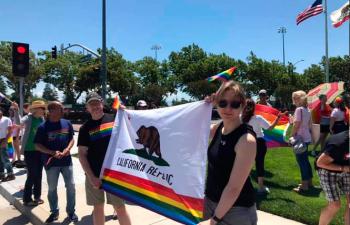 LGBT Dublin residents and their allies nonetheless held a protest Saturday, June 1, at the city's flagpole, where they brought their own rainbow flags to put pressure on the council to fly it on a city flagpole. Photo: Courtesy Facebook

Tracy recognizes Pride month
In Tracy, right outside the Bay Area in the Central Valley, the city's mayor and four council members agreed to gay City Councilman Dan Tavares Arriola's request to fly the Pride flag June 28 in honor of the 50th anniversary of the Stonewall Riots, the uprising at a New York City bar that is credited with launching the modern gay rights movement.

Ahead of the council meeting Tuesday, Arriola had told the Bay Area Reporter that he had hoped his city wouldn't follow in Dublin's initial footsteps and reject flying the rainbow flag. Having been subjected to homophobic attacks on an anonymously written blog during his campaign last year, Arriola wasn't sure how the vote would go.

"People realize that type of rhetoric is not tolerated in Tracy. I am hoping we learn that we can't tolerate that and move forward. I am optimistic it will pass," he said.

In a text following the council's vote, Arriola wrote he was "proud" that his council had voted unanimously to raise the flag. The city's mayor also issued a proclamation for Pride month Tuesday night, marking a first for the San Joaquin County city.

"Tonight, for the first time ever, the city of Tracy voted to recognize and actually celebrate the LGBT community," Arriola told the B.A.R. "As the first openly LGBT elected official in our city, I am so proud that our community decided to support acceptance, unity, and love!"