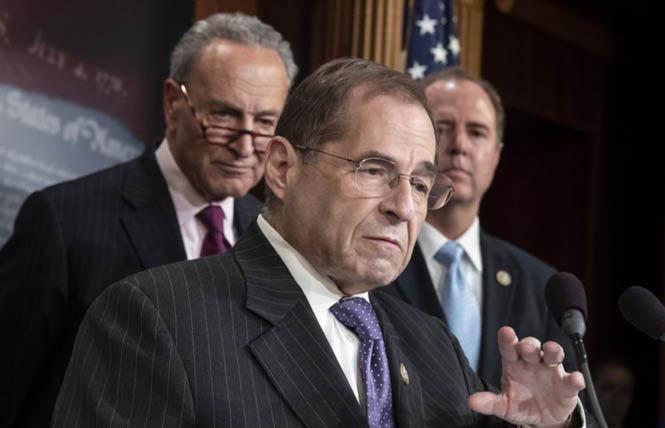 The House of Representatives Friday approved the Equality Act, legislation that would protect LGBTQ people from discrimination throughout daily life.

The bipartisan vote was 236-173, according to a news release from the Human Rights Campaign.

One of the sponsors of HR 5, as the bill is known, is gay Representative David Cicilline (D-Rhode Island). The Equality Act would amend the 1964 Civil Rights Act to extend protections to include sexual orientation and gender identity.

While the May 17 vote was historic — it's the first time a chamber of Congress has approved a comprehensive LGBTQ civil rights bill — the Equality Act is unlikely to have a vote in the Senate because Republicans control it. President Donald Trump said this week that he opposes it as well, meaning its chances of becoming law during his administration are remote.

"The Trump administration absolutely opposes discrimination of any kind and supports the equal treatment of all," an administration official stated earlier this week. "However, this bill in its current form is filled with poison pills that threaten to undermine parental and conscience rights."

The Washington Blade first reported on the White House's opposition to the bill.

"This long overdue legislation will provide millions of LGBTQ Americans protections from being denied medical care, fired from their jobs, or thrown out of their homes simply because of who they are," Nadler said, according to a statement from his office.

"And, on this monumental day, my thoughts with Phyllis Lyon and the late Del Martin, who shared their lives together for decades," Pelosi said, according to a copy of her remarks. "They were mentors to so many of us in San Francisco for decades about civic engagement, some of that civic engagement related to LGBTQ rights. They were an inspiration, as I say, to many of us.

"When people say to me, it's easy for you to be for some of these things because you are from San Francisco, people are so tolerant there. I say, 'Tolerant? That is a condescending word to me. This is not about tolerance, this is about respect of the LGBTQ community. This is about taking pride,'" she added. "And that is what we do."

Pelosi made passage of the Equality Act a priority once she returned to the speakership in January. It was rolled out in short order, and did get support from eight Republicans, according to Gay City News.

"Fifty years after the LGBTQ Americans took to the streets outside of New York's Stonewall Inn to fight against harassment and hate, we take pride in the progress we have forged together," Pelosi said. "Our founders, in their great wisdom, wrote in our beautiful preamble — wrote of the blessings of liberty, which were to be the birthright of all Americans."

HRC, which for decades has tried to get an LGBT non-discrimination law passed in at least one chamber of Congress, called the vote a "major milestone."

"Today's historic vote is a major milestone for equality and sends a powerful and profound message to LGBTQ people, especially LGBTQ youth, that the U.S. House has their backs," HRC President Chad Griffin said in the release. "No one's rights should depend on which side of a state or city line they live on, and today we took a giant step forward in our journey toward full equality."

Griffin added that the vote "would not have been possible without the millions of LGBTQ people and our allies who organized, mobilized, and turned out to elect a pro-equality majority in 2018. Now, we will take our fight to the U.S. Senate and turn up the pressure on Leader [Mitch] McConnell to allow a vote on this crucial legislation. And we won't slow down in working to turn out the 10 million eligible LGBTQ voters and our millions more allies to elect a pro-equality president in 2020 who will sign the Equality Act into law."

So far, McConnell (R-Kentucky) has given no indication he will call the Equality Act up for a vote, despite support from at least one GOP senator, Susan Collins of Maine.

"Today's passage of the Equality Act in the U.S. House sends a loud and clear message that discrimination of any kind is unacceptable, no matter who you are, who you love, or where you live," Equality California Executive Director Rick Zbur said in a statement. "The vote today isn't just a major milestone, but also a testament to the strength of LGBTQ people and our movement, as we advance this critical civil rights legislation in the face of such a fiercely anti-LGBTQ Administration — and we aren't done yet.

"Earlier this week, President Trump announced his opposition to the Equality Act, but LGBTQ Americans can rest assured that the pro-equality House majority — led by California's own Speaker Nancy Pelosi — has our backs," he added. "Equality California remains committed to fighting for full federal equality in our nation's Capitol, in the courts, and in the streets."

Annise Parker, president and CEO of the LGBTQ Victory Fund, called on the Senate to schedule a vote.

"All 10 openly LGBTQ members of Congress banded together to share their lived experiences and pass this commonsense reform — and their advocacy was crucial to courting the votes it received today," Parker, a lesbian and the former mayor of Houston said in a statement. "America is beyond ready to enshrine LGBTQ equality in public life and now the U.S. Senate must step up."

The National Black Justice Coalition said the vote is important for LGBT people of color.

"Every day, members of the black community face discrimination as a result of who we are and how we show up in the world," David J. Johns, NBJC executive director, said in a statement. "There is much more work to do to ensure that each of us are spared from discrimination and spared from attacks on our constitutional rights and the passage of the Equality Act is a critical step in the right direction."

Discrimination is a real and persistent problem for LGBTQ Americans, HRC noted. Organization polling has found that nearly two-thirds of self-identified LGBTQ Americans report experiencing discrimination. Currently, 50% of LGBTQ Americans live in the 30 states that still lack statewide legal non-discrimination protections, leaving their residents and visitors at risk of being fired, denied housing, or refused service because of who they are or whom they love.

The Equality Act would guarantee existing civil rights laws apply to LGBTQ people by providing clear, consistent non-discrimination protections based on sexual orientation or gender identity across key areas of life, while expanding and enhancing protections for people of color, women and religious minorities, the HRC release stated.

Updated, 5/17/19: This article was updated to include remarks from Speaker Pelosi.