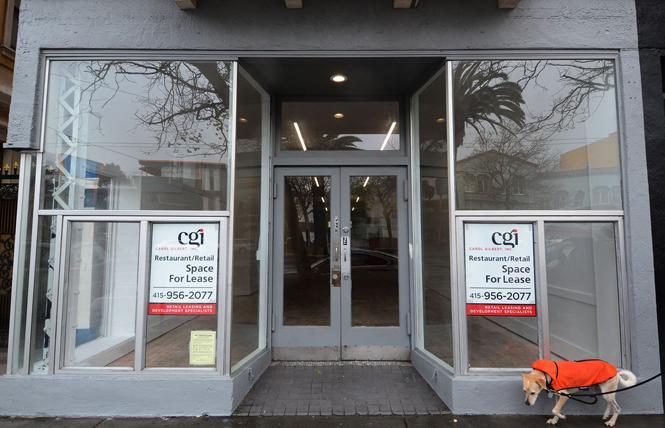 The city's planning commission voted Thursday to make it easier for nonprofits to lease sidewalk-fronting storefronts along upper Market Street in the city's gay Castro district.

At the same time, the oversight body on a 5-0 vote recommended that the city make it harder for formulaic health care uses, such as urgent care centers, to open along the commercial corridor and elsewhere in the city. It wants such businesses to fall under the city's rules for formula retailers, meaning if they have 11 or more locations they would need to seek conditional use permits in order to lease ground floor retail space on upper Market Street.

The decision was in effect a rejection of what city planning staff had recommended. As the Bay Area Reporter noted in a story in its May 9 issue, planners has raised objections to allowing nonprofit uses that resemble offices to rent out ground floor retail spaces on upper Market Street. They also had argued against requiring health care providers to seek permits in order to move into the business district.

"I think the better way to get at this," said commissioner Rich Hillis, is to leave the health care uses "principally permitted but require a conditional use permit if it is formula retail."

As for nonprofits, Hillis said he found restricting them "a little odd."

Diego Sanchez, who oversees legislative affairs for the planning department, reiterated the concerns that he laid out in the staff report on the proposed zoning changes for upper Market Street.

"In general, we want to see offices off the first floor," he explained.

Nonetheless, Sanchez said that the planning code does allow for social service uses on ground floors and that many nonprofits would fall under such a use category. However, when pressed by the commissioners, Sanchez acknowledged that certain nonprofits would "probably not be allowed."

Brooke Ray Rivera, with the San Francisco Parks Alliance, informed the oversight panel that she has spent six months searching for a ground floor lease for her nonprofit and has been told such a use is not allowed.

"We have had zero luck finding a space that would allow us to be on the ground floor," she said.

Tom Radulovich, a gay man who leads the nonprofit Livable City, said philanthropic organizations in San Francisco are "endangered species" due to the escalating cost to rent commercial office spaces. In recent years a number of LGBT-focused nonprofits have moved to the East Bay due to being unable to afford rents in San Francisco.

"If we are competing with tech for space we are losing because we can not pay the same rents," said Radulovich.

In response to those concerns, the planning commission suggested the city eliminate from its zoning code the category of philanthropic administrative service uses so that nonprofits would fall under the less restrictive social service uses category.

District 8 Supervisor Rafael Mandelman is seeking the zoning changes in the gayborhood in order to address the glut of empty storefronts along Market Street — mainly between Church and Castro streets — that has been exacerbated by the opening of new mixed-use developments with housing over retail spaces in the area and changes to consumers' shopping habits away from brick-and-mortar retailers to online sites.

As the B.A.R. first reported in March, art studios, general entertainment uses, and restaurants serving only wine and beer would find it easier to open in the commercial corridor, in addition to nonprofits, under the revisions to the zoning code. Mandelman, a gay man elected to the board in June, spent months conferring with neighborhood leaders on the legislation.

Speaking on behalf of the supervisor, who was unable to attend Thursday's hearing, aide Tom Temprano urged the planning commissioners to support the proposal.

"It won't be a silver bullet for all of the upper Market vacancy concerns," acknowledged Temprano, but it is "a meaningful attempt to help small businesses and nonprofits to succeed where we desperately need them to succeed."

Other changes included in the proposal would drop the requirement for wine shops and restaurants that only sell wine and beer to seek a conditional use permit if they wanted to open in a ground floor space. Those selling or serving liquor and spirits would.

The zoning code would also be updated to allow businesses in the area to stock more items for sale on the sidewalk in front of their stores, such as gardening supplies, plants, and building materials.

The Board of Supervisors land use committee will next take up the zoning changes, perhaps as soon as its May 20 meeting but more likely sometime in June. Once adopted by the supervisors, Mayor London Breed would need to sign off on it for the zoning changes to become law.