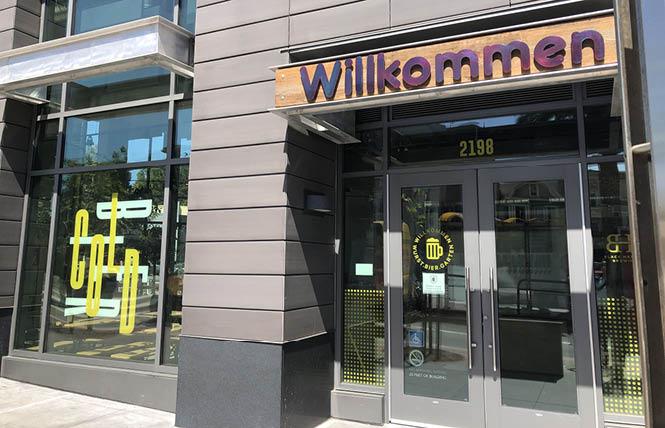 A beer hall is set to open next week on upper Market Street in San Francisco's gay Castro district, while across the street an arcade bar has won approval to expand its business.

Willkommen, a new beer hall from San Francisco-based Black Hammer Brewing, expects to open as soon as Wednesday, May 8, should it pass its final permit inspections in the coming days. It has taken over the intersection-fronting retail space on the ground floor of 2198 Market Street, a mixed-use residential development at Sanchez and 15th streets.

The indoor area has been transformed into a Bavarian forest, with 14-foot-tall maple trees and picnic bench seating. In addition to the brewery's beers, there will also be wine, cider kombuchas, and sausages from the local queer-owned Rosamunde Sausage Grill.

"I went to Munich two years ago and got super excited," said Jim Furman, the brewery's CEO, regarding the décor for Willkommen, which is based on the German word for "welcome." "It let's you be outdoors but it is warm. The building is all glass."

There is seating for 150 people inside, while there are plans to have several outdoor picnic tables that will be dog friendly. Due to the location being a wind tunnel, however, it is unclear if, or when, the outdoor seating will be installed.

Once it is given the greenlight to open, Willkommen plans to be open from 11 a.m. until 11:30 p.m. weekdays and until midnight on weekends. It will be a fast-casual type of service, where customers place their orders, receive their drinks, and have their food brought to their table.

"Our hope is to anchor down that corner and bring some light and fun to the corner," Furman told the Castro Merchants business group at its monthly meeting Thursday.

Helping to enliven that intersection will be Brewcade, the popular arcade and craft beer bar across the street at 2200 Market Street. It won unanimous approval Thursday from the city's planning commission to expand into the adjacent restaurant space and occupy the entire ground floor retail of the mixed-use development.

As the Bay Area Reporter first reported in September, the siblings who own the entertainment venue are combining the two spaces into one totaling roughly 5,000 square feet and plan to add food to the lineup at the 4-year-old Brewcade. Last year they took over the liquor license of their former restaurant neighbor, which had been operating under the name Botellón, in order to facilitate the expansion of their business.

Brewcade co-owners Tiffny Vergara Chung and her brother, Shawn Vergara, faced no opposition to their plans, and the planning commission approved their permits this afternoon on a simple voice vote without any discussion. Construction on the reconfigured space is estimated to cost $250,000.

Shawn Vergara told the B.A.R. they hope to reopen by late June or early July. Due to the construction needed to revamp the storefronts, he said it is likely they will have to be closed during the busy Pride weekend. Some of the expanded gaming options are expected to be pool tables, skee-ball, and air hockey.

The bar owners are relinquishing their Type 42 liquor license since they have now purchased the former eatery's Type 47 license. The new alcohol permit will no longer restrict them from allowing people under the age of 21 into Brewcade.

They have yet to determine, however, how they will allow people under the legal drinking age into the arcade. It is likely they will have set hours during weekend afternoons for families, said Shawn Vergara, but that has not been finalized.

The opening of the two businesses will help to activate a major intersection along the upper Market Street corridor that has struggled for years with retail vacancies in prominent corner storefronts since the opening of three mixed-use developments where Market crosses Sanchez and 15th streets. Kitty-corner to Brewcade's space at 2175 Market Street sits a vacant retail space that has long been advertised as a potential restaurant location.

Zoning changes for the commercial corridor being pushed by gay District 8 Supervisor Rafael Mandelman would make it easier for eateries serving only wine and beer to open along upper Market Street. The planning commission is expected to take up the proposal when it meets next Thursday, May 9.