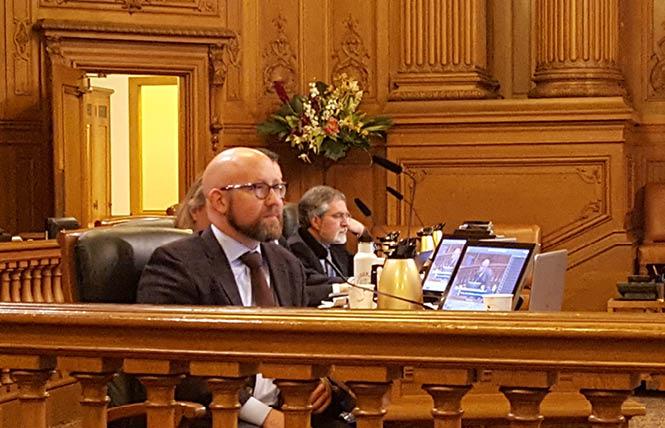 Preliminary information on how San Francisco departments are collecting data on sexual orientation and gender identity were discussed at a Board of Supervisors committee hearing Thursday, but officials from the half-dozen agencies that made presentations all acknowledged that they are behind due to a variety of reasons.

Gay District 8 Supervisor Rafael Mandelman called in February for the hearing before the board's government audit and oversight committee to get a progress report on the SOGI data collection. He specifically asked city agencies to provide mid-year reports on their SOGI data collection efforts during the current 2018-2019 fiscal year.

After the one and a half hour hearing, Mandelman said that another report will come out at the end of this fiscal year.

"Six to eight months from now, we'll be back here" to discuss how the SOGI collection data is going, he said.

Officials from each of those agencies made presentations during the April 18 hearing.

Clair Farley, director of the city's Office of Transgender Initiatives, has been working with the departments on how to best collect the SOGI data. She told the committee members —Supervisors Gordon Mar, Aaron Peskin, and Vallie Brown, who were joined by Mandelman — that every single department has a different tracking system. Others, she said, pushed the SOGI information "across their entire portfolio," which took more time.

"Departments that don't have LGBT-specific [programs] are a little behind the curve," she explained, adding that all the departments were willing to incorporate the data.

In addition to the six departments, contractors that receive more than $50,000 a year in city funds are also required to collect SOGI data. LGBT advocates contend that, without such information, city policymakers and officials are blind to health issues, housing needs, and other concerns confronting the LGBT community.

Gay former supervisor and state Senator Scott Wiener (D-San Francisco) attended the hearing and said the city SOGI data legislation came out of recommendations from the LGBT Aging Policy Task Force, which he spearheaded with out former supervisors David Campos and Christina Olague when they served on the board.

He reiterated the importance of having accurate data at the local level, as the federal government is systematically trying to make the LGBT community invisible.

Abigail Stewart-Kahn, with the Department of Homelessness and Supportive Housing, told the committee that the agency is in the midst of transitioning to its new Online Navigation and Entry System, known as ONE, which so far has information on 40% of its client base. The ONE intake form, she said, is now SOGI compliant.

"The next step is for HSH to move 60% of clients into ONE and add SOGI language to relevant contracts," Stewart-Kahn said.

She also acknowledged that the department has "significant work to do" on training. HSH is also working with nonprofits that serve youth to open a coordinated entry point for them.

Mandelman asked about the information HSH has so far gathered.

She also discussed the persistent problem of the city's shelters not being welcoming to LGBT people, particularly trans people.

"Trans folks may not always feel welcome. We have an overrepresentation of trans folks in the homeless population," Stewart-Kahn said. "We hear very loud and clear and are working with the Office of Transgender Initiatives."

Brian Cheu, a gay man who's director of community development for the Mayor's Office of Housing and Community Development, said that the department implemented SOGI data just before its 2017-18 grant year. It has 191 funded grants.

He also spoke to one of the stumbling blocks to collecting SOGI data — some service providers and city workers are uncomfortable asking how someone identifies.

Cheu said that a little over 6% of the department's clients identify as LGB. In public housing programs, the number is even lower, about 2%, he said, adding that those people "may be uncomfortable" with providing information and staff will look at whether people are not being served or don't want to answer the questions. On gender identity, the figure is a little over 2%.

In the department's housing program, over 18 projects for both ownership opportunities and rentals, Cheu said 12% of the people identify as LGB and about 1.9% identify as transgender or gender-nonconforming. He said the numbers were higher on the rental side, as individuals the department is working with cannot afford even the affordable units.

Cheu also spoke about outreach, including advertising in papers like the B.A.R. He said that while the paper reaches LGB people, he doesn't think trans people are reached "by papers such as the B.A.R."

"Most trans clients get their information through word of mouth," he said.

Dr. Ayanna Bennett and Ashley Scarborough reported on the Department of Public Health. The women said SOGI collection has been "a very long process."

Bennett said DPH's numbers will go up as more programs add SOGI information. As of December 2018, of the major electronic health records, 20% had SOGI data.

Bennett pointed out that getting information during an emergency, for example, can be challenging.

"When patients present at an emergency department there is a lot going on," she said.

As for DPH's clinics, Bennett said that some are better at asking questions than others. Remarkably, she said, Chinatown "has better numbers" after lots of translations of the forms, some of which were apparently initially incorrectly translated.

Other departments
Sarah Duffy, manager of data and evaluations for the Department of Children, Youth, and their Families, focused on transitional age youth. She said questions on sexual orientation and gender identity were being asked but that a question about what sex someone was assigned at birth had been removed, as the B.A.R. reported last fall.

Duffy said that the department is partnering with the San Francisco Unified School District and hopes to get 10,000 surveys back from younger students, but that those would be anonymous responses.

Smith said that DHS programs are stored in 11 computer systems and involve over 400 contracts. SOGI information can't be added to the state computer systems, some of which DHS uses, but the state is catching up with its own SOGI data collection. It is about a year behind, Smith told the committee.

Nolan, a gay man, said that DAAS has been working with Openhouse, which provides housing and services to LGBT seniors, especially on training. He reported progress on all SOGI data collection except for in-home support services, which is due to the state systems and translation issues.

All of the agencies reported that staff were being trained.

Public comment
Many speakers during public comment asked the supervisors to support Our Trans Home — San Francisco, which is asking for almost $1 million in the city budget for housing subsidies, housing navigators, and to develop a trans housing plan. As the B.A.R. reported last week, trans city and community leaders say trans people face homelessness at a rate 18 times more than the general population.

Michelle Alcedo, director of programs at Openhouse, pointed out that LGBT seniors make up 12% of the senior population in San Francisco.

"I'm pleased to see DAAS is the most successful in collecting SOGI data," she said. "Data tells us where we should put resources."