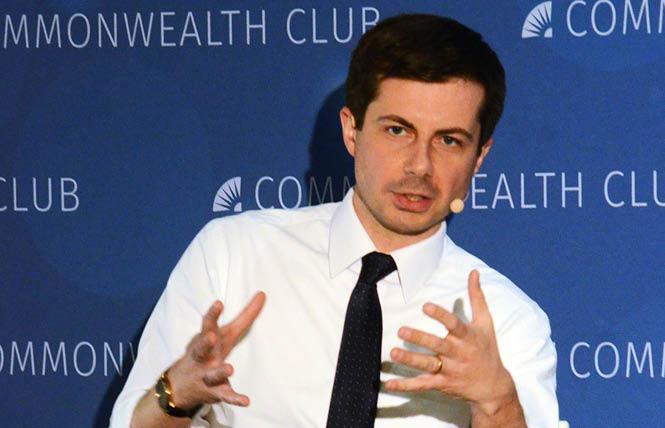 Pete Buttigieg, the gay mayor of South Bend, Indiana, made history Sunday when he formally announced his bid for president.

Buttigieg took the stage in Studebaker Building 87 at 12:15 p.m. (Pacific Time) and said he's in the race.

"My name is Pete Buttigieg, they call me Mayor Pete ... and I'm running for president of the United States," he said to loud applause.

He said people who want to "stop the clock and turn it back" believed in a myth "of selling the impossible promise of a bygone era ... that was never as promised to begin with."

He explained why he was running at the age of 37.

"But we live in a moment that compels us each to act," he said.

With his April 14 announcement, Buttigieg, becomes the first out gay man to run for the Democratic Party's presidential nomination. Over the last several weeks he has surged in polls and media attention, though he remains an underdog candidate.

Buttigieg (pronounced Boot-edge-edge) made his announcement amid a large crowd in a building of the former automaker. The South Bend Tribune reported Saturday that city officials expected about 10,000 people.

During his speech, he said time has changed.

"It calls for a new generation of leadership in this country," he said, explaining his three principles: freedom, security, and democracy.

"And take it from me and Chasten," he said, referring to his husband, noting freedom isn't free if people can't marry who they love.

Buttigieg wasn't the only presidential hopeful to official announce his candidacy this weekend in what is a crowded Democratic field. Bay Area Congressman Eric Swalwell (D-Dublin) planned to hold a rally at his alma mater, Dublin High School, Sunday afternoon. Swalwell, 38 and a straight ally, said he was running for president last week on "The Late Show with Stephen Colbert."

Buttigieg is expected on the Democratic candidate debate stage in June. His campaign reported raising $7 million in the first quarter, which ended March 31. He outraised better-known contenders Senators Cory Booker of New Jersey and Elizabeth Warren of Massachusetts, and came ahead of several others.

Only one other openly gay person has ever tried to run for a major party presidential nomination: Fred Karger ran for the Republican nomination in 2012. Karger beat eventual nominee Mitt Romney in one New Hampshire college straw poll, but he never made it onto a nationally televised debate stage and appeared on the primary ballot in only six states.