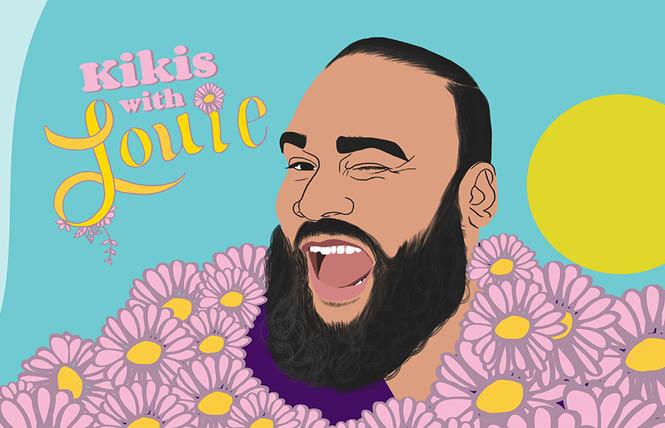 In recognition of National LGBT Health Awareness Week, Advocates for Youth held a Week of Action March 25-29. The national organization, based in Washington, D.C., was one of hundreds of groups across the country that partnered with the National Coalition for LGBT Health to bring awareness to the 17th year of the event.

One of the Advocates for Youth activities was held at Pittsburgh's Community Human Services' youth drop-in center, Project Silk. The center held a screening of the YouTube series "Kikis with Louie," which features deep, honest conversations about the most challenging issues facing queer youth: relationships, sexuality, health, and culture. It's a project of Advocates for Youth.

The organizer of the Project Silk event was Tyreese Taylor, a 24-year-old pansexual man. He told the Bay Area Reporter that a small group of LGBT youth watched four episodes and then had an open-ended discussion about sexual health.

"It was really successful," he said. "It really got their minds going. We talked a lot about issues going on in our community. We touched base on sexual health, trans acceptance, and touched based on topics that we talk about daily in our space."

Advocates for Youth held similar screenings in Philadelphia. Toraje Heyward, a youth activist in Atlanta, also hosted a screening in that city.

"As a young, black queer male living with HIV, I have a civic duty to empower those whose voices are not heard. Physical and mental health was honestly not at the forefront of my well-being," said Heyward in a news release. "Before my diagnosis, I lived day by day taking my health for granted and honestly was unaware of my health status. As long as I 'looked and felt fine,' I didn't feel the need to get routine checkups or even use condoms. I want the youth to be proactive with their health rather than be reactive like I was."

Taylor said the day after the screening the youth drop-in center also gave gift cards to youth who completed an HIV or sexually transmitted disease test. This was the first year Project Silk participated in the Advocate For Youth's Week of Action, and Taylor said he plans to do it again next year because of the importance of educating LGBT youth about their sexual health.

"Events like this are important because they really broaden the horizons of the people who attend. We talked about topics that often no one wants to talk about. It also gets peoples' minds thinking about how to create change and influences them to care about their sexual health," he said.

For more information about Advocates for Youth, visit https://advocatesforyouth.org/.

The program is the second of its kind in the country, according to the university. The goal of the 90-minute sessions, open to all medical professionals, is to enhance the knowledge and support needed to provide evidence-based, culturally competent, and comprehensive care to LGBTs.

"Health care providers are often not trained to provide best practice care to people in the LGBT community, particularly to trans individuals," said Dr. Joan Duwve, associate dean for Public Health Practice at Richard M. Fairbanks School of Public Health, who originated the idea for the teleclincs. "It's important to offer an opportunity to help health care providers in the state of Indiana to understand what they can do to make a more welcoming practice and have less stigmatized conversations with individuals and to provide best practices to people."

The sessions include topics such as feminizing hormones, nonbinary identities, voice therapy and surgical options, gender diverse youth, HIV prevention and PrEP, and legal issues facing LGBT youth. There are currently eight scheduled sessions from April until July. They are hosted on the second and fourth Wednesday of the month from 11:30 a.m. to 1 p.m. Pacific Time.

Practitioners from all over the country have participated in the sessions since the program launched in September. A team of experts from the Transgender Health & Wellness program from the university's School of Medicine and Eskenazi Health leads the videoconference and uses de-identified patient cases to instruct the participants on how to manage patients with complex conditions. The cases, Duwve said, are very diverse.

Although they don't have measured success of the sessions at this point, as it is still early in the roll out, Duwve said the medical professionals who have attended are very pleased with them.

"People are happy about the sessions," she said. "The project is critical for optimum care of trans clients. [The attendees'] knowledge and competency has improved performance and patient outcomes."

Medical professionals interested in registering for a session can visit https://fsph.iupui.edu/research-centers/centers/public-health-practice/ECHO/join.html.

LGBT advocates oppose Amazon's move to Tennessee
After Amazon announced last year that it would open an operations center in Nashville, Tennessee, LGBT advocates are fighting back due to the state's anti-LGBT laws. The "No Gay? No Way!" campaign started over a year ago when Amazon was considering Nashville as the home of its second headquarters.

"Amazon has made rights for, and acceptance of, gay and transgender people part of its criteria in choosing a second headquarters, now is the time for Amazon to put some action behind their rhetoric," said Conor Gaughan, the campaign's manager, in a news release. "As Amazon expands to Nashville, bringing over 5,000 workers to the state, Tennessee's legislature is seeking to expand its anti-LGBT laws with a slate of bills. This is a prime opportunity for Amazon to have a real and positive impact in the lives of their employees and families by standing up for their values."

The campaign team announced March 27 that it would circulate digital advertisements targeting Amazon employees and customers in Tennessee and Washington state, the location of Amazon's headquarters, asking the company to uphold its diversity mission. It also plans to distribute print advertisements with the hope that Amazon will take a more vocal stance against the current and proposed anti-LGBT legislation.

On Amazon's website, Latasha Gillespie, director of Amazon's Global Diversity & Inclusion organization states, "Using our Leadership Principles to help guide us we are innovating in diversity, inclusion, and equality like we do in all areas of our business: using data, thinking big, and building disruptive solutions. We seek diverse builders from all walks of life to join our teams, and we encourage our employees to bring their authentic, original, and best selves to work."

Currently, Tennessee has multiple anti-LGBT laws in place, with others possibly being implemented or expanded. Tennessee is on the California list of restricted states for state-funded and state-sponsored travel. It is also on San Francisco's no-fly list for city employees for non-essential government travel, and the city also bans contracting with companies based in the state.

Other anti-LGBT laws are being considered by the Legislature. HB 1151 and Senate Bill 1297 both would criminalize transgender people for using the restrooms that match their gender identity. Others include bills that would allow foster and adoption agencies to refuse the right of adoption to LGBT people. The "Tennessee Natural Marriage Defense Act" attempts to make it illegal for LGBTs to marry, defying the Supreme Court's ruling in 2015 that legalized same-sex marriage nationwide.

"Amazon prides itself on disrupting the way people do things, whether it be online shopping or groceries. Amazon needs to take that pride and use their corporate megaphone to change the way Tennessee treats its LGBT citizens," Gaughan said. "We believe Amazon should use all of their clout and power not only to stop Tennessee from passing new discriminatory bills and rolling back the archaic bills of the past, but also to proactively fight for the full inclusion of LGBT citizens in Tennessee and across the country."

The No Gay? No Way! campaign also plans to have a mobile billboard make its way around the Amazon campuses in Seattle. It had planned to fly a plane over downtown Nashville and the Tennessee Capitol March 27 as lawmakers debated some of the anti-LGBT legislation, but was unable to do so due to technical difficulties, according to the Tennessean.
Amazon and No Gay? No Way! did not respond to requests for comment from the B.A.R.