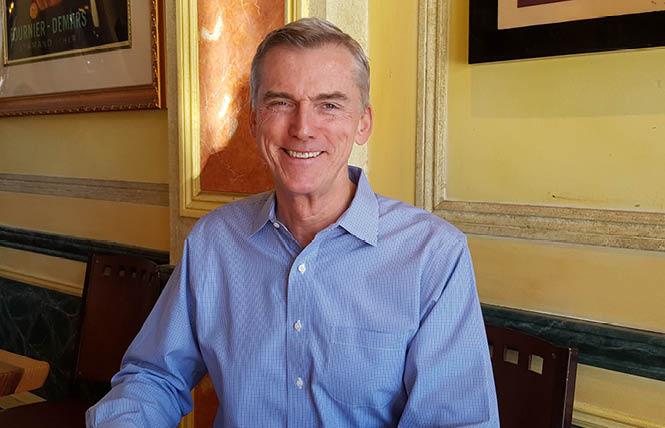 Internal squabbles at Lambda Legal Defense and Education Fund, one of the country's top LGBT public interest legal groups, came to a head last summer when Rachel B. Tiven abruptly resigned as its chief executive officer.

She had been hired in 2016 to succeed the New York-based agency's longtime leader Kevin Cathcart, who retired that year. But her tenure was fraught due to staff complaints about her leadership skills and cuts in their health care and retirement benefits.

A number of employees were either let go or quit, and the remaining staff decided to unionize in order to better fight for their interests. The strife led more than 60 people affiliated with the agency to a sign a letter of no confidence in Tiven, leading her to step down August 3.

In a number of statements Tiven defended her actions, noting that the board had given her "a mandate to make big changes." Two months after she left, the agency was still said to be reeling internally. In early October the online site HuffPost ran a story about Lambda Legal with a headline that said it was "in crisis."

That month the agency brought on Richard Burns, 63, a former Lambda Legal board member and former executive director of the NYC LGBT Community Center, as its interim CEO until it could name a permanent replacement. Since leaving the LGBT center in 2009 Burns has worked as a nonprofit management consultant for a number of agencies, including the Johnson Family Foundation, Funders for LGBTQ Issues, and the Stonewall Community Foundation.

His relationship to Lambda Legal dates back to the 1970s, when he was managing editor of Gay Community News and the agency sued on the newspaper's behalf to challenge a federal prison policy that banned gay publications. In 1980, Burns joined Lambda Legal's first national board of directors the same time he enrolled at Northeastern University School of Law.

His contract with Lambda Legal is for at least a year, though he is willing to stay longer if the agency needs more time to search for a new executive director. No matter the length of his tenure at the helm, Burns is adamant that he will only be in the position on a temporary basis.

"I really feel at this stage of my life that this is where I can add surgical value," he told the Bay Area Reporter during a recent interview while in San Francisco for a Lambda Legal board meeting. "When I leave I'm always a little heartbroken because, by then, I fall in love with the staff."

Jennifer C. Pizer, the law and policy director for Lambda Legal, told the B.A.R. that she and her colleagues have been extremely pleased with Burns' leadership over the last five months. So much so she said she wishes he would remain permanently.

"I can't overstate my ongoing disappointment in the fact that he doesn't want the job," said Pizer, who has been with the agency 23 years and is based out of its Los Angeles office.

Due to her family's ties to California, and Lambda Legal's CEO based out of New York, Pizer made it clear to the B.A.R. she didn't want to move across the country when asked if she was interested in leading the agency. Lambda Legal is in a more stable situation, she said, than where it had been when Burns first came on board.

"Things absolutely are moving in the right direction," said Pizer. "He is an expert in understanding how to stabilize an organization that has gone through a large scale transition and how to create mutual understanding between the staff and board."

Having served as an interim leader for more than half a dozen agencies, Burns said it is common for there to be staff turmoil when a longtime leader leaves. He has seen it often be the case, having witnessed it firsthand after he left the LGBT center and saw a number of people he had hired there over the years subsequently be replaced.

"First of all, when a longtime leader leaves, there's almost always staff turnover," he said. "And some people leave because they get recruited and some people are helped out the door. So that's normal, however, at Lambda it's more than that, there's been more turnover, some of which, you know, we really didn't want to happen."

As he has filled staff positions, Burns said he has made a point to include other employees and board members in the hiring decisions so that the people he is recruiting are not seen as being his hires but that of the agency.

At the same time Burns is also ensuring that the agency's lawyers have the resources they need to push back against the Trump administration's various moves to rescind protections for LGBT people and enact discriminatory policies, such as the new rules that make it practically impossible for transgender people to serve openly in the military.

Even as alarm grows over President Donald Trump working with the Republican-led Senate to stack the federal courts with extremely conservative justices, Burns said it doesn't automatically mean they won't be open to the arguments being made by lawyers bringing forward LGBT rights cases.

Even in losing a case, there could still be a win, argued Burns, if the decision is a narrowly tailored one.

"The more that we can narrow decisions against us, the better we will be," said Burns. "And with smart lawyering, you know, we can do that, and there is a predisposition among many justices to narrow things, just as a matter of course."

Despite the negative headlines, for both Lambda Legal and the LGBT rights movement in general, over the last two years, Burns said he remains hopeful about the future.

"We are an extremely resilient people," he noted. "And I will have you know, we can get discouraged, but we are a movement that has a spine."