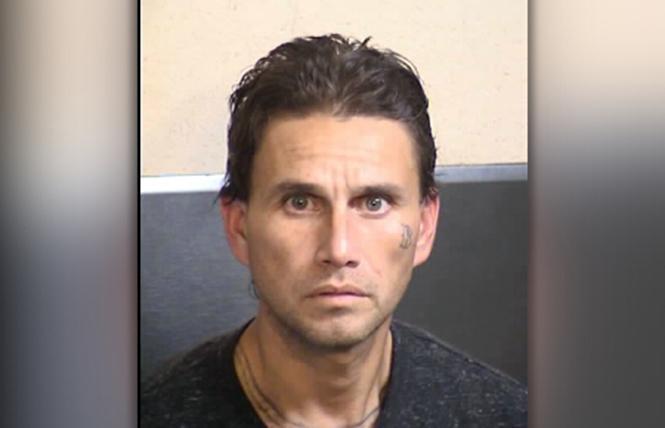 Members of Fresno's LGBT community are "outraged" over a plea deal reached with a man charged in the fatal stabbing of a transgender woman nearly four years ago.

According to the Fresno Bee, Richard Joseph Lopez, 39, pleaded no contest to involuntary manslaughter in the 2015 death of Kenton "KC" Haggard, 66. The deal was part of an agreement with the Fresno County District Attorney's office, the paper reported.

According to those who knew Haggard, the Fresno LGBT community is deeply disappointed with the plea deal.

Lopez initially pleaded not guilty to first-degree murder charges at his arraignment in February 2018. Eventually, through the plea deal, overseen by Fresno Superior Court Judge Michael Idiart, Lopez pleaded no contest to the lesser charge of voluntary manslaughter. He will be sentenced June 19. (A no contest plea is treated the same as a guilty plea by the court.)

As previously reported by the Bay Area Reporter, Haggard, 66, was seen on surveillance video from a tattoo shop walking down North Blackstone Avenue early in the morning of July 23, 2015. In the video, an SUV drove toward Haggard and stopped near her around 2 a.m. Haggard walked over to the vehicle and appeared to talk for a few moments with someone inside. After someone jabbed at her throat, Haggard walked away and collapsed on the sidewalk. She was soon pronounced dead.

Through investigation it was determined that Haggard was likely killed because of her gender identity, according to police.

At a news conference announcing Lopez's arrest, Fresno Police Chief Jerry Dyer said that an investigation led them to Lopez, who was already in Fresno County Jail on unrelated elder abuse and auto theft charges. He was sentenced to three years for the elder abuse charge.

To the Fresno LGBT community, Lopez's plea deal was disheartening. Zoyer Zyndel, a 32-year-old transgender/gender fluid man, is the organizational chair at Trans-E-Motion, where Haggard attended some trans support group meetings a few months prior to her death. He said the plea deal sends the message that Fresno does not value the lives of its transgender community members.

"The fact that he was given manslaughter instead of first-degree murder says a lot in terms of our cultural values around transgender people and the implication here is that this person, K.C. Haggard, wasn't valuable enough to warrant justice in the way of the first-degree murder charge," Zyndel told the B.A.R. "She was murdered and she's never coming back. He gets a manslaughter plea. That sends a message that his life is in fact more valuable than hers and his crime wasn't that serious."

He said that another reason the Fresno LGBT community is angry is that the plea deal was reached regardless of the fact that the entirety of the murder was captured on video.

"For a crime to be caught on tape and have it be verified that that person is trans and have enough circumstantial pieces there that [Lopez] indicated he killed her cause he is angry and to not get a life sentence," Zyndel said.

It was known by the Trans E-Motion community that Haggard was just beginning her transition a little over two months before her death. The B.A.R. has previously reported that Haggard's family, including her brother, Dr. Gerald Haggard, who spoke with the B.A.R. many times, did not know Haggard was transgender and said that Haggard had never identified that way to him. In previous articles he still referred to Haggard as his brother and as a male.

Throughout the investigation, police also went back and forth referring to Haggard using male and female pronouns.

When Lopez was arrested, Gerald Haggard told the B.A.R., "This was a violent act on an individual, and I was afraid it might happen to somebody else, plus, I do want justice for the taking of my brother."

"The memorials for Kenton from the transgender community helped keep the spotlight on this," he said. "It's been a long time, and it was discouraging."

Explaining why he referred to Haggard as male, he said, "It's as much habit as anything else. That was our relationship for 65 years."

Gerald Haggard previously described his sibling as "the type of person people liked, and liked to help ... I don't know of anybody that had a grudge against my brother."

Gerald Haggard did not immediately respond to a request for comment for this article.

Zyndel described her as, "Someone who was very meek, shy, and reserved. She was not really someone that is especially threatening in the least. She genuinely wanted to start living her authentic self and so she reached out for support."

It is still not known why Haggard was hanging out near Blackstone around 2 a.m. the night of her death. The area is known by police as having high prostitution activity.

According to the owner of the Tattoo parlor, Most Wanted Tattoo, whose video surveillance captured the incident, the prostitution activity in the neighborhood is actually about four to five blocks north of the spot where Haggard was stabbed.

About 12 hours after Haggard was killed, police said, the same SUV that approached her was seen "maybe" two miles away, near Highway 99, and someone who appeared to be the same suspect was captured on video picking up a sex worker, who was never identified by authorities.

The Fresno District Attorney's office did not comment on the story.

"Because this is still a pending case, we cannot comment until after sentencing," the office wrote in an emailed response to the B.A.R.

Lopez's lawyer, Greg Gross, did not respond to a request for comment.