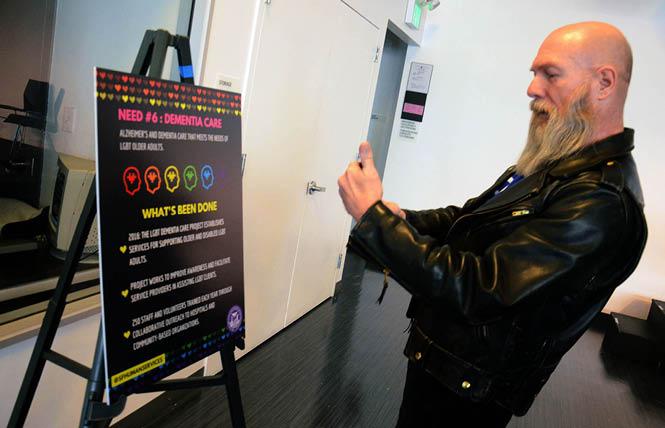 Tez Anderson, co-founder of Let's Kick ASS (AIDS Survivor Syndrome), snaps a photo of one of several posters charting the progress of the 15 recommendations of the LGBT Aging Policy Task Force's report during a small celebration March 9 at the San Francisco LGBT Community Center of the fifth anniversary of the report and its subsequent implementation. Photo: Rick Gerharter

LGBT seniors and their advocates will descend on Capitol Hill this week to lobby members of Congress in an effort to ensure they are included in federal aging programs.

They will be highlighting the need to include LGBT older adults and those living with HIV and AIDS among the "greatest social needs populations" under the Older Americans Act, which is up for reauthorization this year. Also on the advocates' agenda will be pressing federal lawmakers to pass the Equality Act, an omnibus bill to be introduced this week that would provide nationwide non-discrimination protections for LGBTQ people in areas like housing and employment.

Upward of 100 people from across the country are expected to take part in the first-ever National Day of Advocacy Wednesday, March 13, organized by SAGE: Advocacy and Services for LGBT Elders.

"On the 50th anniversary of Stonewall we feel it is important to give LGBT older people and those living with HIV an opportunity to share their stories with their members of Congress," said Aaron Tax, SAGE's director of advocacy. "It is critically important in this calendar year, with reauthorization of the Older Americans Act and introduction of the Equality Act, for LGBT older people to have a seat at the table and their voices are heard."

At least three people from California are part of the official delegation of advocates taking part. One of the trio is Candice Nichols, director of programs at the LGBT Community Center of the Desert in Palm Springs, which is affiliated with SAGE. Nichols, formerly executive director of the LGBT center in Las Vegas, will be in Washington, D.C. Monday through Thursday to take part in various meetings SAGE is hosting this week.

"If you know anything about Palm Springs, you know that 50 percent of the population here is LGBTQ. And 50 percent of those are over 50," said Nichols, 65, a lesbian who lives in Palm Springs, for why she wanted to take part in the advocacy day. "This was just a perfect opportunity, especially with the change in the House, it is a perfect time for us to come and lobby for what LGBT people who are over 50 and older people living with HIV need, especially when it comes to the Older Americans Act and its reauthorization."

According to the demographic report on the LGBT community released last week by the Williams Institute, an LGBT think tank at UCLA, 7 percent of the 11,343,000 American adults who identify as LGBT are age 65 and older. The total comes out to a little more than 794,000 LGBT seniors.

As the Bay Area Reporter has noted in numerous articles over the last six years, LGBT seniors have unique needs compared to their heterosexual counterparts as many are estranged from their biological families due to their sexual orientation or gender identity. Many older gay men lost multiple friends and loved ones to the AIDS epidemic.

Thus, LGBT seniors often lack the social and familial support that their straight counterparts can rely on as they age. They also are more likely to lack financial resources and struggle to afford housing and other necessities.

An increasing number of local and state jurisdictions are working to address the myriad needs of LGBT seniors. San Francisco has been at the forefront of such efforts, adopting policies that have been duplicated by other cities and at the state level.

Community leaders and city officials held a celebration Saturday morning at the LGBT Community Center to mark the progress that has been made in implementing the numerous recommendations called for in a groundbreaking LGBT aging policy plan that San Francisco adopted in 2014. The LGBT aging issues highlighted in the report ran the gamut from social support and health services to legal assistance and access to affordable housing.

California lawmakers are now moving forward on the creation of a statewide aging plan that is expected to include the needs of the Golden State's LGBT community. Days after state Senator Hannah-Beth Jackson (D-Santa Barbara) introduced legislation last month requiring the development of a master plan for aging Californians, Governor Gavin Newsom voiced his support for it during his State of the State address.

At the federal level, local leaders are also engaged in advocating for the needs of the country's rapidly aging population. Shireen McSpadden, who is bisexual and executive director of the city's Department of Aging and Adult Services, and Tom Nolan, a gay man who is manager of special projects at DAAS and staffed the LGBT Aging Policy Task Force, were on Capitol Hill earlier this month advocating for renewal of the Older Americans Act along with other aging officials from across the country.

Sage's Tax noted that the federal law funds programs aimed at assisting seniors who want to remain in their homes. It is a key funding source for food assistance programs like Meals on Wheels and communal lunches hosted by senior centers and other groups.

"It allows you to age in place in your community," said Tax, 44, who is bisexual. "It is a win-win. It is a win for older people, most of whom prefer to age in place in their community, and a win for the federal government because, by and large, most people don't have long-term-care insurance. If they need assisted living, most folks don't have the means to pay for it, and Medicaid ends up picking up the tab."

Explicitly calling for federally funded aging programs to include LGBT seniors and older adults living with HIV and AIDS will ensure that providers are taking concrete steps to deliver services to both groups of people, argued Tax.

She expects to meet with staffers for both of the state's Democratic senators, Dianne Feinstein and Kamala Harris, as well as her local representative in the House, Congressman Dr. Raul Ruiz (D-Palm Desert), whose 36th Congressional District includes much of the Coachella Valley.

"It is an opportunity for us to ask Congress to ensure that we can live a discrimination-free life and have access to services that are culturally competent and make sure we can age with dignity and independence," Nichols said of the advocacy day.