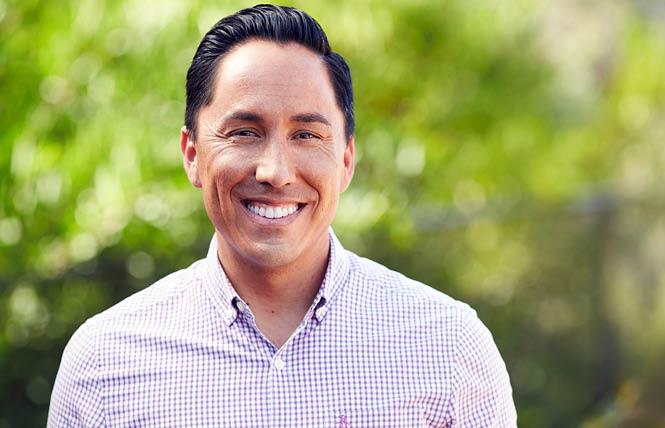 Should he win the 2020 race for a full four-year term, Gloria would become the first LGBT person elected mayor of one of the Golden State's largest cities. And he would be one of only a handful of out mayors overseeing major metropolitan areas in the U.S.

With 1.4 million residents, San Diego is the eighth-largest city in the country and the second largest in the state.

"Todd Gloria will be a mayor who fights for every San Diegan, in every community," Equality California Executive Director Rick Zbur stated in an announcement released early Friday morning. "Throughout his career, Todd has championed civil rights and social justice for the LGBTQ community and worked tirelessly to give all Californians a shot at success. We're ready to make history in 2020."

Gloria, 40, who opted to run for mayor rather than seek re-election to his Assembly seat next year, stated he was "proud to have Equality California join our diverse coalition looking to make history in San Diego."

Serving this year and next as vice chair of the Legislative LGBT Caucus, Gloria stated that his mayoral campaign "is about sending a clear message that San Diego is a place for all people where everyone has an equal opportunity to be successful. I know Equality California shares my vision for San Diego and I look forward to making it a reality in 2020 and beyond."

Gloria announced his intention to run for mayor in January. San Diego will hold a non-partisan mayoral primary election March 3 next year, with the top two vote-getters advancing to the November 3 general election.

San Diego's current mayor, Republican Kevin Faulconer, is termed out next year and it is expected that a Democrat will succeed him. So far the only other prominent politician to enter the race is San Diego City Councilwoman Barbara Bry, while attorney Cory Briggs and several others have pulled papers for the race.

Gloria briefly served as San Diego's interim mayor in late 2013 through early 2014 due to the resignation of former mayor Bob Filner amid sexual harassment accusations. The former city councilman then was elected to the 78th Assembly District seat, succeeding Toni Atkins, a lesbian former city councilwoman who also had served as interim mayor of San Diego. Now President pro Tempore of the state Senate, Atkins has had a historic tenure in the state Legislature, becoming the first out woman to lead both chambers.

Gloria is a third-generation San Diegan and is the first LGBT person of Native American and Filipino ancestry to serve in the state Legislature. Even before being elected to the state Assembly in 2016, Gloria had long been talked about as a potential mayoral candidate one day.

During his first two-year term in office, Gloria worked with EQCA to pass legislation that protected the rights of LGBTQ foster youth to access quality, gender-affirming health care. This year he is the lead sponsor of the Safe and Supportive Schools Act of 2019, which would provide California teachers and school staff with tools and training to better support their LGBTQ students.