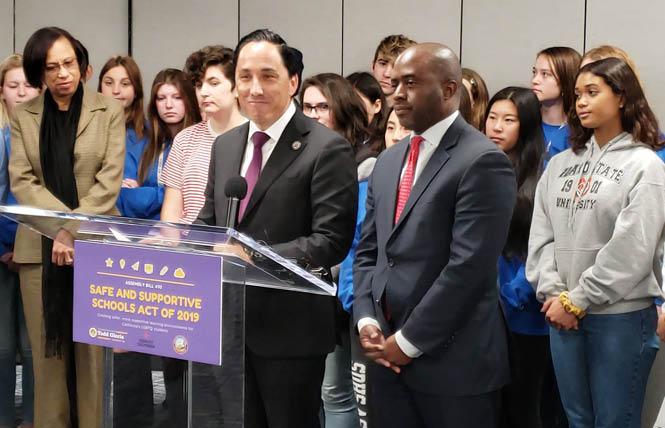 California lawmakers have revived a bill requiring public schools to train their staff on LGBT cultural competency that former Governor Jerry Brown had vetoed in the fall.

Former Assemblyman Tony Thurmond (D-Richmond) had authored the legislation, Assembly Bill 2153, to provide funding for annual training sessions for educators in the state on how to support LGBTQ students in grades seven through 12 and address issues they face in school like bullying and harassment.

But in his veto message issued last September, Brown noted that he had signed into law in 2015 AB 827, which required the state Department of Education to assess whether local schools are providing their certificated staff working in middle and high schools information about the resources available for LGBTQ students. Brown, a noted fiscal hawk who was termed out of office in January, argued that local schools already have the resources they need to provide additional training.

As the Bay Area Reporter noted in October, lesbian state Senate President Pro Tempore Toni Atkins (D-San Diego) pledged to ensure that the needs of LGBTQ students in California's public schools are addressed. Hours prior to Brown's veto Atkins had touted the Legislature's passage of the bill in her keynote address before the Bay Area Municipal Elections Committee, the South Bay's main LGBT political group.

At a news conference in San Diego Wednesday afternoon, Thurmond, now the state superintendent of public instruction, and gay Assemblyman Todd Gloria (D-San Diego) announced they were re-introducing the legislation. The bill is also co-authored by the California Legislative LGBT Caucus, for which Gloria serves as vice chair.

The legislation is now numbered AB 493 and known as the Safe and Supportive Schools Act of 2019.

"I'm proud to co-sponsor AB 493, which will help protect California's LGBTQ students by providing teachers the resources they need to support them at both school and home," stated Thurmond. "Every child deserves a caring and supportive school environment, and we must continue to work towards closing disparities in health, mental health and academic outcomes for our LGBTQ students."

According to the 2017 National School Climate Survey, 82 percent of LGBTQ students reported hearing anti-LGBTQ remarks in their school; approximately 7 in 10 reported being called names or threatened because of their sexual orientation; and more than one-third of students who identify as LGBTQ reported missing at least one day of school because of feeling unsafe.

AB 493 again calls for teachers and staff working with California middle and high school students in grades seven through 12 to receive annual professional development training and information on resources available to LGBTQ students. Not only should the training teach school employees on how to assist LGBTQ students who are bullied or harassed at school, it should also instruct them on how to support those students who are abandoned by their families or face discrimination in the broader community outside of school.

"The bullying and name calling I experienced in school as a young gay kid is still a reality for today's LGBTQ youth. No child should have to experience that," stated Gloria. "Students should feel safe, accepted, included, and supported in their school. Equipping educators with resources to better support LGBTQ students will create a safer and more inclusive environment for these students to be successful."

Equality California, the statewide LGBT advocacy group, is once again a lead sponsor of the legislation. It is set to release this year a groundbreaking report card on the state's public school districts.

As the B.A.R. has previously noted, the responses to EQCA's Safe and Supportive Schools Survey from more than 130 school districts across the state found that few are adequately equipping educators and other personnel with the tools they need to protect their LGBTQ students.

"When LGBTQ students don't feel safe and supported at school, they can't learn," stated EQCA Executive Director Rick Zbur. "It's time for California to give our hardworking teachers the tools and training they need to ensure every student — regardless of sexual orientation or gender identity — has a shot at success."