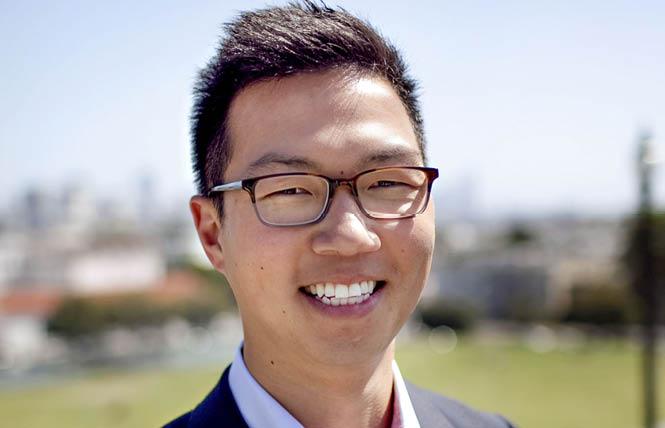 When it comes to politics and San Francisco's LGBT community, there have been just two out Asian-American candidates to ever win elective office in the city.

The first was Angie Fa, who in 1992 became the first out lesbian to win a seat on the city's public school board. Two years later Lawrence Wong won a seat on the community college board, becoming the first openly gay Asian man to be elected to public office in the United States.

Since 2014, when Wong decided not to seek re-election, there has not been any out LGBT Asian-American elected officials in the city. Come Tuesday's election, local LGBT Asian-American leaders hope to rectify that omission in the makeup of the roster of San Francisco politicians.

Janice Li, a queer bicycle advocate, is running for the District 8 seat on the board that oversees the BART regional public transit agency. Phil Kim, a gay man and charter school employee, is again running for a school board seat after falling short in the 2016 race.

The Gay Asian Pacific Alliance, an affinity group for local LGBT Asian-Americans that revived its political action committee this year, endorsed both Li and Kim and has been working to see them win their races.

"When I moved to San Francisco from Pennsylvania, I, like many new gaysian residents, was so excited to be in a place where there was a strong LGBTQ AAPI community. Much to my surprise, there are no current local elected officials in San Francisco who identify as LGBTQ and AAPI," wrote GAPA PAC chair Oliver Truong in a recent email from the group. "In the capital of LGBTQ America and AAPI America, we need to have our community represented and our voices heard by politicians and elected officials."

Li, 31, who secured endorsements from the Bay Area Reporter, the Harvey Milk LGBTQ Democratic Club, and Equality California, the statewide LGBT advocacy group, as well as the San Francisco Examiner, has also noticed the lack of people who resemble her in queer political circles in the city. At a happy hour event that GAPA held in the Castro for transgender school board candidate Mia Satya, Li found herself the only Asian woman in attendance.

"At the Milk club I was in a room of 30 people and I was the only queer Asian woman in the room. That is often my reality," said Li during an editorial board meeting with the B.A.R.

It has made Li question, "how can we build a pipeline," she said, for other LGBTQ Asians interested in serving in public office.

Kim, 28, told the B.A.R. that he is "acutely aware of the fact that I am the only gay Asian man running for office in San Francisco" this year. While he did not secure the B.A.R.'s endorsement, he does have the backing of EQCA, the national LGBTQ Victory Fund, and HONOR PAC, the LGBT Latino political group, as well as that of the San Francisco Chronicle. Chinese newspaper Sing Tao Daily endorsed both Kim and Li.

"I take that both as a point of pride and a privilege," added Kim, who is the first generation in his South Korean family to be born in the U.S. "I think, on the one hand, I am incredibly grateful for the opportunity. I also recognize the fact I don't represent the voice of every Asian LGBT in San Francisco."

Li, who was born in Hong Kong and moved at an early age to Buffalo, New York, also does not want to claim to speak for the entire, diverse Asian and Pacific Islander community, as it is comprised of people from myriad countries. But she is cognizant of the fact she would be the first Asian woman to serve on the BART board and only its second Asian member.

"I don't want to be speaking for a whole community of people when it hasn't coalesced," she said.

The issue of electing more LGBT Asian-Americans to public office has been a concern locally for years. While Fa and Wong had success running in down ballot races, there has never been an out Asian American to win election as a supervisor in San Francisco.

The absence of LGBT Asian-American politicians in the city comes as straight Asian Americans have made significant political gains. As the B.A.R. noted in a February 2011 article, LGBT Asian-American politicians have faced unique hurdles convincing non-Asian voters to elect them. And for out candidates, it can be a challenge within the Asian-American community to attract support. During his 1994 campaign Wong had to cancel a fundraiser he had planned at a Chinatown restaurant after community members pressured the owner.

"When I ran, I ran as an openly gay man. Members of the Chinese community would snub me, ignore me, walk away from me when I made public appearances at that time. It was a difficult time," Wong told the B.A.R. seven years ago in recalling his first race. "The LGBT community always has been very supportive, and I am very proud to say that. Now the Asian community is always supportive."

Yet pockets of homophobia remain evident within the local Asian community. For instance, Asian evangelical Christian voters in the Bay Area helped passed Proposition 8, the same-sex marriage ban California voters adopted in 2008 and was later overturned by federal courts.

More recently, LGBT school issues have elicited homophobic responses from within the local Asian community. Fremont school board president Yang Shao, who is running for the District 4 seat on the city council, voted to oppose the teaching of LGBT-inclusive sex education in his city's classrooms. His position prompted gay law professor Justin Sha to jump into the council race in hopes of seeing Shao be defeated.

In San Francisco Josephine Zhao suspended her candidacy for a seat on the city's school board after her past comments denouncing transgender students using school bathrooms of their choice resurfaced. While claiming she no longer held such a view, Zhao was found to be telling Chinese voters on a social messaging app that she continued to stand by her prior position.

Her decision to end her campaign came too late for her name to be removed from the ballot. In recent weeks there have been reports that her supporters continue to campaign for her within the local Chinese community.

Neither Li nor Kim has used the controversy surrounding Zhao to bolster their own campaigns, just as the other LGBT candidates on Tuesday's ballot who are not of Asian descent have, for the most part, not made it a campaign issue. Doing so, several argued, would only bolster her name recognition.

The issue has been challenging to navigate, said Li, because some of the Chinese cultural references that Zhao used got lost when translated into English and became the butt of jokes on social media. At the same time, Li said the transphobia she espoused needs to be addressed.

"I would like to see queer API people leading that, but many are not out at home," said Li.

On the campaign trail voters have repeatedly asked Kim for his thoughts on Zhao and her candidacy. Reading about her past comments "was really painful," he said. He called her when the first reports came out and met with Zhao for a few hours, during which he said he was frank in condemning her remarks.

"I was very honest in telling her that I am deeply committed to wanting to have a conversation and be a part of the solution. I just don't know what that looks like right now," said Kim.

He believes having those conversations is important but feels it is more appropriate to have that public dialogue after the election.

"I do think that we need Asian-Americans to do some deep introspective thinking about our world view and why we believe the things we believe," he said. "I think that is challenging and deeply personal work that needs to happen within the Asian community alone."

The lack of LGBT acceptance within the Asian-American community hits close to home for Kim, who has not spoken to his mother since coming out as gay to her five years ago. His mother was raised in a "deeply" religious Christian family in South Korea, he said.

He has not experienced any homophobia while campaigning this year, though during his 2016 bid, Kim received several Facebook comments asking why he mentioned being gay as a candidate. One issue he has had to confront in seeking office is putting himself out there for public scrutiny and engaging with strangers.

"There are challenges in the Asian-American community to step up for leadership and be in the public spotlight. My uncle told me, when I was going to college, don't do student government and don't ruffle people's feathers. That mind set is a thing," said Kim.

The support he has received this time in seeking a school board seat signifies that "the voice of an educator of color, a gay Asian man, is something that is wanted and valued," said Kim, who someday hopes to be a parent of children in the city's public schools.

In realizing how few queer Asians there are in politics, Li is hopeful she will join the ranks of those who were able to break through and be elected.

"We've got to get more queer Asians elected everywhere," she said. "It is something I am really excited to do."

UPDATED 8/13/2020 to correct Justin Sha's job title as he had inaccurately claimed to be a lawyer when running for city council.