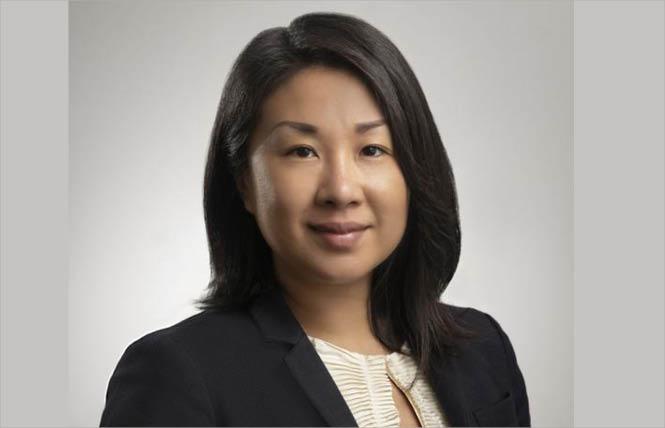 A San Francisco LGBT political group is calling for the resignation of the board president of Equality California after she came to the defense of a candidate who suspended her bid for a school board seat due to her past transphobic views.

Sacramento resident Mandy Lee took over leadership of the statewide LGBT advocacy group's executive committee in 2017. Her two-year term will come to an end December 31, but Lee will remain a member of EQCA's board.

Employed by Darius Anderson's Platinum Advisors lobbying group, Lee had endorsed Josephine Zhao's candidacy for a seat on the board that oversees the San Francisco Unified School District. But Zhao in September ended her campaign due to her past comments against transgender students being allowed to use the restroom of their choice and her apparent continued support of such views in online comments shared with Chinese voters.

Her decision to end her campaign, however, came too late for her name to be removed from the ballot. And while she posted a statement September 11 to her website informing voters of her decision to drop out of the race, there have been reports ever since of her supporters continuing to campaign for her within the local Chinese community.

In an October 17 Facebook post, Alice B. Toklas LGBT Democratic Club Co-Chairs Gina Simi and Eric Lukoff called out Zhao for not publicly saying she would refuse to be seated on the school board should voters elect her to one of the three open seats on the November 6 ballot. They disclosed that they had asked her to do so when she called them earlier this month but, in light of her failing to do so, they felt the need to go public with their conversation.

"Josephine told us that it was not the right time for her to hold public office, and she committed to us personally that she would not accept the seat. We asked her to consider making this announcement publicly, but she declined," wrote Simi and Lukoff.

Their post came a day after members of the more progressive Harvey Milk LGBTQ Democratic Club voted to call for Lee's removal as EQCA's board president. In an email the club sent out Thursday morning, it noted that at its October 16 meeting it had voted "to ask Equality California to remove Mandy Lee from its board over her ridiculous opinion piece defending anti-trans bigot Josephine Zhao."

Club co-president Carolina Morales told the Bay Area Reporter that, "As a queer immigrant woman, it is unacceptable to defend the actions of any heterosexual cisgender person who discriminates and judges our LGBT community. Equality California should stand for our most vulnerable people, particularly the transgender community, and distance themselves from Lee's comments"

It was in reference to an essay published by the website the Bay City Beacon on October 11 — National Coming Out Day — in which Lee came to the defense of her friend Zhao, whom she wrote had helped her come out as "a gay Chinese woman" to her first generation immigrant family.

"When I met Josephine, we found common ground in our cultural backgrounds. My parents and I were not speaking at the time because of my sexuality," wrote Lee, who is from Alameda. "She devised a plan to guide my parents toward full acceptance. Due to her efforts and some helpful intervention from my grandmother, my relationship with my parents today has improved immensely."

While she stressed that Zhao's past comments were "wrong," Lee argued the LGBT community should use the controversy over her bid for public office as an "opportunity" to bring it and the local Chinese community together "rather than further alienating immigrant communities."

"The transphobic comments Josephine made in 2013 were unacceptable and I cannot speak to her recent troubling WeChat posts," added Lee. "However, I believe she has and is continuing to evolve. And when she says that she supports the rights of our transgender brothers and sisters to use the bathroom of their choice today, I believe her."

Contacted Thursday about the calls for her to resign, Lee told the B.A.R. she had no plans to do so. She otherwise declined an interview request, writing in a message via Facebook that, "I said what I wanted to say in my OpEd so I'd refer you to that if you want more clarity around my position."

As board president, Lee approved EQCA's endorsement of two out candidates running for the San Francisco school board seats: Mia Satya and Phil Kim. Satya would be the city's first transgender elected official, while Kim, a gay man, would be the first out Asian-American to hold elected office in San Francisco since Lawrence Wong cycled off the college board in 2014.

EQCA Executive Director Rick Zbur defended Lee in a statement issued to the B.A.R. after being contacted for comment about the Milk club's vote.

"Mandy Lee has dedicated her life to fighting for civil rights and social justice, and we are proud of her service to our community as president of our board. She has worked tirelessly to bridge divides between the LGBTQ and immigrant communities to which she belongs and to unite us all around our common values," stated Zbur. "To insinuate otherwise is contrary to the facts. In her op-ed, Mandy shared a personal experience, as a gay woman of color, about the challenges she faced in coming out to her parents in a socially conservative immigrant family and her perspective on winning hearts and minds to advance equality. Any attempt to silence Mandy for telling a personal story or sharing her perspective is simply wrong."

Zbur also called out Zhao for her past comments and urged voters to elect Satya and Kim.

EQCA board member Leslie Katz, a lesbian former San Francisco supervisor, told the B.A.R. that she agreed with Lee's call for the LGBT community to work with those who held homophobic or transphobic views in the past but have since changed their positions. She recalled how some didn't want her to work with the Reverend Amos Brown when they were both appointed to vacant seats on the Board of Supervisors in 1996 due to his past anti-gay remarks.

Yet, she noted, Brown turned out to be a champion of LGBT rights, signing on as a co-sponsor of an equal benefits ordinance that required businesses with city contracts to provide the same benefits to their LGBT and heterosexual employees. Brown also led a coalition of faith leaders opposed to Proposition 8, the 2008 ballot measure that banned same-sex marriage later overturned by the courts.

"What I thought Mandy was trying to do in her essay has been misinterpreted," said Katz. "We should be mindful not to do what the right always does in shutting people off. We should take these opportunities when people acknowledge they were misguided to reach out to them and help educate them on our issues."

Asked if they agreed that Lee should resign, Simi and Lukoff told the B.A.R., "We don't know Mandy or anything about her beyond the op-ed in the Beacon last week — we don't have a comment at this time."

As for Zhao, she reposted Lee's essay on her own website and thanked her for advocating for turning the controversy her actions have caused into "a teachable moment." She added that she is "committed to be an ally of LGBTQ community as well as an agent to bring the immigrant community forward."

The November 2019 race for the city's top law enforcement position is wide open after District Attorney George Gascón's surprise announcement this month that he would not seek re-election due to the failing health of his mother. In addition to Dautch, former Police Commission members Suzy Loftus and Joe Alioto Veronese and Alameda County prosecutor Nancy Tung have all pulled papers for the race.

Last Thursday, Dautch announced he had the support of Pérez, who said in a statement that he was "confident" Dautch could "be both tough on violent crime and smart about progressive criminal justice reforms" as D.A.

"Leif's experience in prosecuting criminal cases at the state and local level combined with his background in environmental and human rights advocacy makes him an ideal fit for San Francisco's future," stated Pérez.

Dautch stated that he is "extremely honored to have the early support of Speaker Pérez, whose work as a champion for working people, social justice, and public safety has always inspired me."

Dautch, who lives with his wife, Brittany, is a former member and president of the San Francisco Juvenile Probation Commission. He currently serves as vice chair of the California State Bar's Criminal Law Executive Committee.

10/22/18 This story was updated to include a comment from the Milk club.