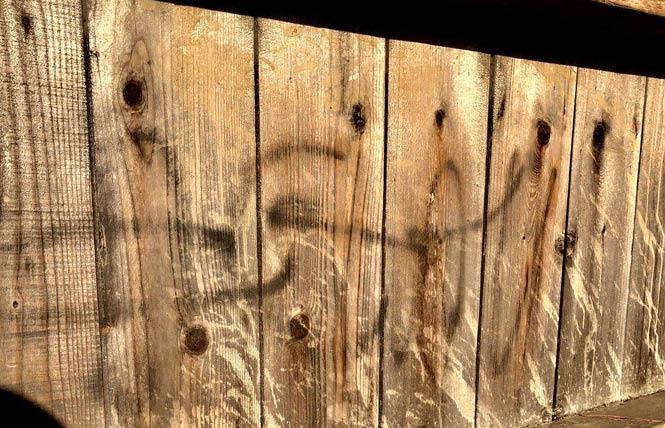 A gay man running for City Council in Redwood City had the fence outside his apartment vandalized with an anti-gay slur Thursday, October 11.

The word #gay was written in black spray paint on a fence outside Jason Galisatus' bedroom window. One of his campaign signs, which was below the slur, was torn down, he told the Bay Area Reporter Friday morning.

"It was unsettling," the 25-year-old Stanford University graduate told the B.A.R. "I won't be intimidated nor will I cease to speak out when I see instances of hatred."

Galisatus came home around 4:30 p.m. Thursday to discover the slur and his campaign sign lying in his yard, which he said had been ripped off the fence. He plans to report the incident to police.

Although Galisatus said people have been very supportive of him and of the LGBT community, this is not an isolated incident.

"The divisive rhetoric coming from the highest level of government is empowering people to act on their hateful sentiments," he said, referring to President Donald Trump.

The polarization in the country is one reason he is running for City Council in Redwood City, which is about 25 miles northwest of San Jose. If elected, Galisatus said he would be Redwood City's first openly LGBT elected City Council member, and the first openly gay person of color elected to any city council in San Mateo County, which includes most of the San Francisco Peninsula.

"We need members of City Council to represent the full spectrum of our community and stand up for all members of the Redwood City community," he said. "It's important to have leaders who will heal the divides and also send a clear message that hate has no place in our community."

Galisatus' campaign platform includes housing affordability, addressing the city's traffic congestion — including that residents deserve access to more transportation options — and supporting small businesses. The campaign is going "really well," he said. Although he was the last candidate to enter the race, he has emerged as one of the leading contenders.