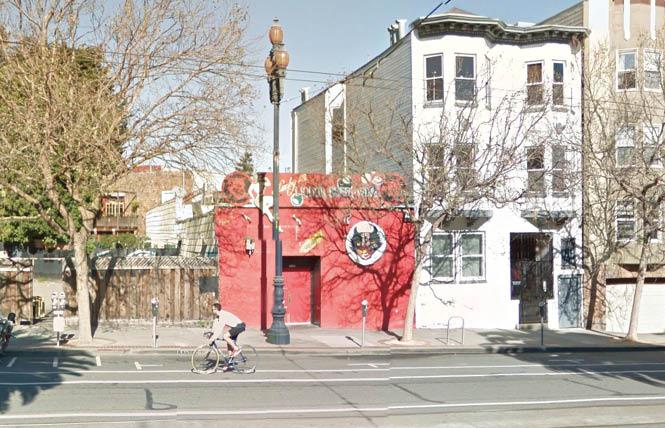 Housing is proposed to replace the Lucky 13 bar on upper Market Street in the Castro district. Photo: Courtesy Google

A historic San Francisco bar in the city's gay Castro district would be demolished to make way for a 33-unit housing development, according to plans filed this month. The developer is seeking expedited approval and a density bonus for the project.

The Lucky 13 straight dive bar at 2140 Market Street has been eyed for years as a possible site for new housing. Preservationists have raised concerns about seeing the 1906 building razed due to the fact that the late gay Supervisor Harvey Milk celebrated his historic victory as the first openly gay elected leader of a major U.S. city there the night of the November 8, 1977 election.

In the spring of 2017 a proposal to build 27 condos at the property won city approval but was later put on the market for sale, with a listing price of $9.75 million. Keystone Properties LLC bought it in February of this year for $7.2 million, according to city property records.

According to documents filed with the city's planning department last week, the developer plans to replace the bar and the adjacent parking lot with an eight story building with a height of 75 feet. Each of the 33 dwelling units of rental housing would have five bedrooms, and on the ground floor would be 1,087 square feet of retail space.

No automobile parking is proposed for the development, though bicycle parking will be included. As prescribed under the State Density Bonus Law, three of the residential units would be set aside as very-low income units, eligible to those making 50 percent of the area median income.

In addition to seeking the extra units, the developer has also requested expedited approval for the project. The deadline for city officials to sign off on the $14.79 million project would be December 3.

This is the second housing project on that block of upper Market Street that Keystone is pursuing and has hired the San Francisco firm Macy Architecture to design. As the Bay Area Reporter reported last week, the developer also submitted plans to demolish the former Open Bible Church building across the street at 2135 Market Street in order to erect a new building with 30 dwelling units all three-bedrooms or larger above ground floor retail.

Kent Mirkani, the principal owner of Keystone, had bought the church building with business partner Daniel Kern in April 2012 for $1.8 million, according to court documents. The proposed housing project also seeks to take advantage of the density bonus law and expedited city approval. The deadline for city officials to sign off on it is December 1.

That block of upper Market Street has already seen two new housing developments with ground floor retail be built in recent years on corner parcels at the intersection of Market, 15th, and Sanchez streets. The next one to open will be at 2101 Market Street at Church and 14th streets.

At that site Spiers is building a mixed-use development featuring 60 rental units above two retail spaces. It is expected to welcome residents in early 2019.