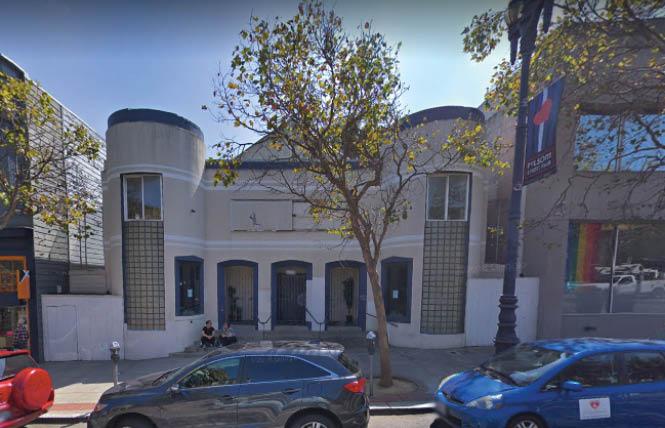 Housing is proposed to replace a former church site on upper Market Street in the Castro district. Photo: Courtesy Google

An abandoned church space on upper Market Street would be turned into "affordable by design" rental housing, according to plans submitted this week to San Francisco planning officials.

Keystone LLC, the project sponsor, is seeking approval to demolish the former Open Bible Church at 2135 Market Street in order to erect a new building with 30 dwelling units all three-bedrooms or larger above ground floor retail. It is taking advantage of the State Density Bonus Law and is seeking expedited approval and permitting of the project by city officials by December 1.

According to the plans submitted Tuesday, October 2, by the San Francisco firm Macy Architecture, the current zoning of the site allows for a six-story, 55 foot building with 22 housing units and 947 square feet of ground-floor storefront space and three units would be set aside as below-market-rate at 55 percent of area median income (AMI).

But under the bonus law, not only would eight additional housing units be allowed, the building could be eight stories at a height of 75 feet. Three units would be designated as very-low income at 50 percent of AMI. There are no plans to provide parking spaces for vehicles.

The existing two-story building is 6,375 square feet and has sat unused for years. Previous redevelopment plans met with opposition and an unsuccessful lawsuit filed by the adjacent businesses Crossroads Trading Co. and Ballet San Francisco, which had rented commercial spaces in 2117 Market Street from the church, which owned the building, and were concerned about access issues between the two buildings.

In July 2007 the church sold both properties to a local developer. The church building at 2135 Market Street changed hands several times, with Kent Mirkani and Daniel Kern buying it in April 2012 for $1.8 million, according to court documents.

Despite their winning the legal dispute with the neighboring businesses in 2015, the property owners withdrew their original plans. As the Bay Area Reporter noted in a 2016 article, some housing activists suggested the city rent it for use as a Navigation Center to house homeless individuals.

The proposed $11.71 million project for the site calls for the retail space to be double-height and for the upper stories to feature traditional angled bay windows. The rear facade facing Church Street "is to receive a light-colored plaster (and/or fiber cement board siding), a treatment commonly found with the neighborhood's mid-block open spaces," state the plans.

The facade fronting Market Street "is currently proposed in terracotta brick tile with steel lintels and metal details" as a nod to the under construction flatiron building across the street at 2101 Market Street at Church and 14th streets. Expected to welcome residents in early 2019, it will have 60 rental units above two retail spaces.

The former church building is situated within the Upper Market Street Commercial Historic District and "appears eligible" under California Historical Resource Status Codes for being listed on both the National Register and California Register for historic properties individually and as a contributor to a state register eligible district through a survey evaluation.

According to the San Francisco Public Library, the Open Bible Church was founded by a group of local Christian people in 1939. They initially worshipped in a church on Laguna Street and, in 1944, affiliated with the national Open Bible Standard Churches Inc. Its "beautiful new edifice" on upper Market Street was dedicated in August 1946, according to the library.

The project marks the second historic church site in the city's gay Castro neighborhood to be turned into new housing. As the B.A.R. reported in August, developer David R. Papale plans to build four housing units at 150 Eureka Street, which for four decades was the home of the LGBTQ-identified Metropolitan Community Church of San Francisco.

But due to pushback from the city's planning commission, Papale agreed to preserve a portion of the existing building and look at adding accessory dwelling units to the site. The plans still call for only four main housing units to be built; the project will require conditional use approval from the oversight body.