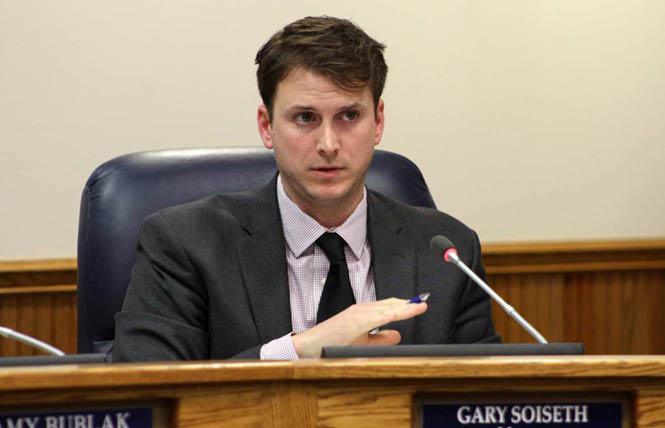 Gary Soiseth, a gay man who is the current mayor of Turlock, California, had several of his campaign signs vandalized with the word "fag."

Soiseth told the Bay Area Reporter that he woke up to multiple Facebook and text messages September 20 from supporters notifying him that some of his campaign signs had been spray-painted.

"I had a moment with the sign by myself and it was a very emotional experience. People don't fully understand how charged that word is for people in the LGBT community," Soiseth, 34, told the B.A.R.

Soiseth came out earlier this year in his fourth year serving as mayor of the primarily Republican community but said residents have since been supportive. He was elected to a four-year term as mayor in 2014 and is seeking re-election in November.

A spokesman for the Turlock Police Department, Sergeant Russ Holeman, confirmed that the vandalism occurred the night of September 19. The initial report stated that three signs in three different locations, two at private residences, one in a vacant lot, were tagged with orange spray paint with the word "fag." The incident is still under investigation.

"No one has been caught and no video or anything has been turned in as of yet," Holeman told the B.A.R. "We investigate any crime thoroughly regardless of whether it's a political sign or not and determine if anything rises to the level of a hate crime or vandalism."

Turlock resident Sarah Beekman told the Turlock Journal that she became aware of the vandalism of her "Gary Soiseth for Turlock mayor" sign in her front yard by someone driving by her house that Thursday morning.

"I know Turlock has a zero tolerance for this kind of hateful language. I commend the police department for taking it seriously," she told the newspaper. "I think it's a clear reminder that we cannot be complacent in our effort to fight this prejudice. Hatred is learned and it's something we all need to work on."

One of Soiseth's opponents, Brad Bates, came out with a statement that his team had nothing to do with the vandalism, reported the Journal.

"I, and to my knowledge, no one involved in any way with my campaign, has any involvement or awareness of this or these incidents until reading about them on social media," posted Bates on Soiseth's campaign Facebook page.

Soiseth told the B.A.R. the signs came at a hard time as the November election has been heating up and has been somewhat ugly.

"I was very hurt," Soiseth said. "It's a very bruising election right now. You try to have very thick skin when people are calling you a liar and a cheater, but when they attack who you are as an individual it's on a different level, a very human level. When I saw that word my guard was down. It hit me in a very different way."

Although he doesn't put the blame onto his challengers, Soiseth said the rhetoric of the election has spurred a "a very negative environment in Turlock that I have never seen before." As well, that "outright lies" have been spread about him.

A pastor at a local church recently gave an entire sermon that spread the message that if Turlock residents vote for Soiseth then they are condoning his sinful behavior, according to Soiseth.

However challenging, Soiseth added that he has received overwhelming support from the majority of the community. When he was on the phone with the B.A.R. he said he was outside a donut shop waiting to go in where a group of men, mostly older than 60, were throwing him a birthday doughnut get together.

"For some of them, I am the first gay person they have ever met and they have been overwhelmingly positive and accepting," he said.

Soiseth is running for a second four-year as mayor of the Stanislaus County city.

Gay SF artist's gallery exhibit protested in LA
A protest was held outside of a Los Angeles art gallery September 15 at the opening of an exhibit featuring work by gay San Francisco artist Richard Hoblock.

The protests, organized by Solidarity House of the South, Defend Boyle Heights, Los Angeles Tenants Union, and BHAAAD (Boyle Heights Alianza Anti Artwashing Y Desplazamiento), were denouncing the gentrification of the neighborhood, according to local publication Hyper Allergic. The gallery, Chimento Contemporary, opened about a month ago at 4480 West Adams Boulevard.

Hoblock, 63, who lives on Upper Market Street in San Francisco, filed a report with the FBI after his exchange with protesters. The exhibit, on display until October 27, is called "View from the Cheap Seats."

According to Hyper Allergic, there was another exhibit displayed at the same time called "Feed" that featured work from emerging artists installed in the gallery's auxiliary space in the bathroom.

He came out the gallery entrance to see a small crowd of about 20 masked individuals holding signs that read "Fuck Your Art" and yelling the same phrase into a megaphone. Hoblock said he tried to ask the protesters what the purpose of their efforts were, but they continued to yell at him.

"I tried to ask them 'What are you doing here? What do you want?'" Hoblock told the B.A.R. "But they just yelled 'fuck your art' in my face."

He then said to the group of protesters, "C'mon you guys, don't you have anything better to do than protest an old gay guy who makes paintings?"

According to Hoblock, the protesters then called him an "old, white privileged queen," and said he was "crying white tears."

"It felt very anti-gay and personal," Hoblock, who is an abstract painter, said. "It was just hate-filled."

The San Francisco artist said he didn't even know what the protest was about until after it ended. The protesters did not make any demands or have a clear message as to what they wanted, he said.

Kimberley Light, curator of the exhibit, called the police on the protesters, according to Hyper Allergic. The Los Angeles Police Department did not respond to a request for comment from the B.A.R. before this article was published.

The B.A.R. reached out to Solidarity House of the South, Defend Boyle Heights, Los Angeles Tenants Union, and BHAAAD, but did not hear back before this article was published.

The organizing groups took to social media to voice their frustration. In BHAAD's Instagram post it said the group was "disgusted" by Light "calling the police on black and brown youth defending their neighborhood."

The post, which received 96 likes, continued, "The protest in West Adams yesterday against Chimento Contemporary was an incredible action of solidarity! West Adams and neighboring Mid City, Crenshaw, and Leimert Park are beautiful black and brown communities that are assaulted by gentrification."

The post also called out their interaction with Hoblock, "Fuck richardhoblock who cried white tears trying to get pity by saying he's old and gay, as if he's not historically part of the colonialism with his old ass and as if dope poc femme queer folks weren't out here defending our communities," the Instagram post read.

According to Hyper Allergic, one of the artists featured in the second exhibit, Hana Harada, removed her artwork after the protest as a show of support for the protesters. She told the art publication in an email, "I empathize with people of color who have had to assimilate and internalize elements of whiteness," Harada said. "I am hesitant to criticize them for it as I believe they are also just trying to survive under white supremacy and capitalism. However, in being complacent, they also perpetuate oppressive systems and that is discouraging. It was very emotional for me to see people of color in conflict with each other."

Hoblock defended the gallery, saying it does support artists of color. According to the Chimento website, the gallery's first exhibit after it opened featured work by black artist Forrest Kirk that portrayed paintings depicting police brutality against African-Americans in an exhibit called "Body Count."

"The gallery does show minorities. They are great to the community, I just don't get it," Hoblock said.

He also said he supports the right to protest, but doesn't support hatred.

"I am a Democrat and I believe in the right to protest, but there are some rules. You can't completely disrupt things or spread hate," he said.