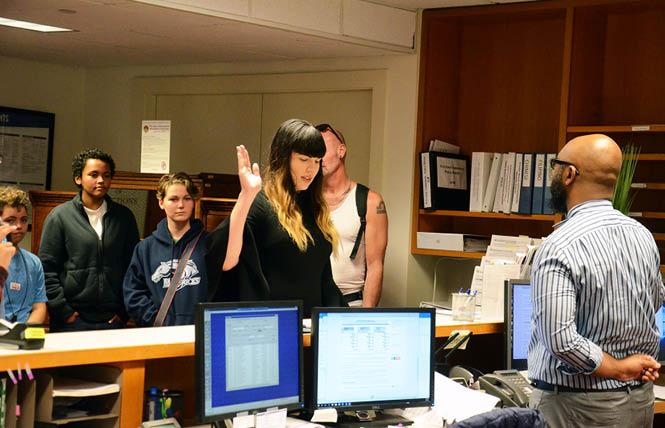 San Francisco school board candidate Mia Satya was administered the oath of candidacy by San Francisco elections clerk Matthew Selby when she filed her papers in mid-August. Photo: Rick Gerharter

A month after being snubbed by the local Democratic Party, a trio of out San Francisco school board candidates has picked up major endorsements of their campaigns.

There are five out candidates seeking seats in November on the oversight body for the San Francisco Unified School District. All total, 18 people are in the race for the three open Board of Education seats.

They include first-time candidates Mia Satya and Martin Rawlings-Fein, who would be the first elected transgender public officials in the city, gay educator Connor Krone, and lesbian firefighter Lenette Thompson. Also running is Phil Kim, a gay man and charter school employee who in 2016 lost his first bid for a school board seat.

Last Wednesday, September 26, the Trans United Fund, a national group aimed at growing the transgender community's political power, endorsed Rawlings-Fein, who identifies as bisexual and is a married father of two public school students, and Satya, who works for the city's LGBT community center and for years has been an advocate for youth.

"The people of San Francisco have the chance to make history this November and elect not just one but two outstanding candidates who are themselves trans and have a long history of supporting and fighting for youth, especially marginalized youth," stated Daye Pope, Trans United Fund's Organizing Director, in announcing the endorsements.

Rawlings-Fein added, "My life's work has been about building bridges between multiple communities where my life intersects and educating about the importance of a supportive and inclusive environment for our children. I am so blessed that the Trans United Fund sees worth in the work towards equity, equality and justice for all students."

Satya, after being endorsed by Trans United, stated, "We have an opportunity in this election, not only to create a city typified by decency where the next generation of trans youth doesn't have to experience the suffering mine and every preceding one did, we have an opportunity to create civil rights advances that will set the standard for the rest of the nation, to create laws and policies and norms that will ultimately protect kids in Oklahoma and Texas by setting precedent and serving as models."

After Honor PAC, which is focused on the Latinx LGBTQ communities, endorsed Kim last Tuesday, he touted in an email to supporters that he was "the only citywide candidate for office in San Francisco to have the endorsements from three of the largest, most influential LGBTQ civil rights and political advocacy/action organizations in the country. I'm incredibly honored to receive all three endorsements."

While the Alice B. Toklas LGBT Democratic Club didn't endorse any of the out candidates, the more progressive Harvey Milk LGBTQ Democratic Club early endorsed Satya in the race. She also secured the endorsement of gay former state Senator Mark Leno (D-San Francisco).

"She is a very impressive individual," Leno told the B.A.R.

Leno has also endorsed Faauuga Moliga in the race. The nephew of American Samoa Governor Lolo Matalasi Moliga, he would be the first Pacific Islander to serve on the school board. He and fellow parents Alison Collins and Li Miao Lovett received the local Democratic Party's endorsement in the race.

"I think it is a little embarrassing that San Francisco has yet to elect a transgender person to office," said Mandelman during an editorial board meeting last week with the Bay Area Reporter.

In a Facebook post last Wednesday, Rawlings-Fein wrote that he was taking the endorsement decisions made by various groups and local leaders in stride.

"People have there (sic) own view of which of the 18 candidates they would like to see in the three open seats for school board. I am not hurt that I have friends who support others. I don't see it as a dig at me. I think there are just an awful lot of folks running and we all have our favorites," he wrote.

Victory endorses local candidates
A number of other local candidates also received the Victory Fund's support last week. The organization said it was its final endorsements for the 2018 election cycle.

The slate of 55 candidates announced last Wednesday brought the total number of candidates endorsed by the Victory Fund this year to a record-breaking 272. Its previous record of 180 candidates was in 2012.

"Never before in our 27-year history have we seen so many viable and qualified LGBTQ leaders standing up to run for office," stated Annise Parker, a lesbian former mayor of Houston who is the political group's president and CEO. "While the Rainbow Wave of LGBTQ candidates is impressive in numbers, we are also running for more high-level offices than ever before and for positions where no openly LGBTQ person has served."

In the Bay Area four out city council candidates received Victory Fund's support. On the Peninsula, the group is backing Jason Galisatus, a gay man seeking a council seat in Redwood City, and Laura Parmer-Lohan, who is running for a council seat in San Carlos, where she lives with her wife and their two kids.