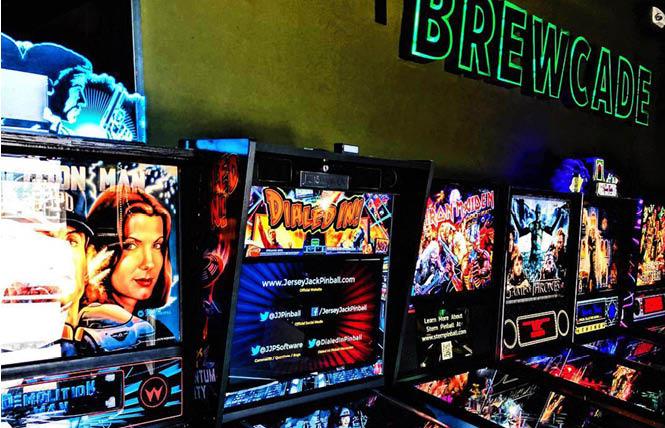 Brewcade, the popular arcade and craft beer bar on upper Market Street in San Francisco's gay Castro district, is in talks to expand into an adjacent restaurant space.

Under the proposed expansion, the siblings who own the entertainment venue at 2200 Market Street would buy the recently opened Botellón next door in order to combine the two spaces and add food to the lineup at Brewcade.

In a letter sent earlier this month to city officials, Brewcade co-owner Tiffny Vergara Chung explained the intent of her and her brother, Shawn Vergara, but also sought advice on several zoning issues that might come up.

"Our intent is to combine the two commercial spaces, expand the arcade concept and (buy) the restaurant 47 license so we can offer food and full liquor," she wrote. "Our landlord, Leticia Luna, is open to the idea of combining the spaces. However, she is concerned about the ability to demise the space back to two commercial spaces in the event we had to vacate."

Brewcade is currently about 1,983 square feet in space, while the restaurant next door is roughly 2,900 square feet. Should they move forward with buying Botellón, the bar owners would relinquish their Type 42 license and purchase the eatery's Type 47 license.

But Luna has raised concerns on how easy it would be to split the space into two storefronts again in the future. If that should occur, she is also worried it would be difficult for another bar to go into the returned smaller space that Brewcade has occupied since it opened in November 2014.

"Would a Conditional Use Authorization be needed to split the space again?" asked Vergara Chung in her letter. "Could the space be demised as it originally was? Would the space with the kitchen retain the entitlements for restaurant?"

She added that Luna "is concerned that Brewcade would lose its bar entitlement as she would want the space to be a bar in the event the spaces were demised again. Is there any way to retain that entitlement? Are there any advantages that the space was once entitled to be a bar?"

A response dated Friday (September 20) from Zoning Administrator Scott F. Sanchez had initially been posted online. But it did not address any of Vergara Chung's specific questions and referred to zoning rules along Divisadero Street instead of for upper Market Street.

Planning staffer Bridget Hicks, who is listed on the letter as a contact, told the Bay Area Reporter it was posted in error and apologized for the mistake. New to using the department's system, Hicks said she had accidentally made the document public before it was completed.

She said she working on the Letter of Determination in response to the Brewcade owners' questions and expects to publish it within four weeks.

Vergara Chung told the B.A.R. she couldn't discuss the planned expansion of the business and said she would have her brother call back. Shawn Vergara, who also owns the nearby Blackbird bar at 2124 Market Street, did not immediately respond to the B.A.R.'s request for comment.

As for Botellón, the Andalé Management Group (AMG) opened it last December. It replaced the LGBT-owned Hecho Cantina, which shuttered in April 2017.

The B.A.R.'s emails to Botellón and AMG requesting comment on selling the business to the Brewcade owners were not immediately returned. According to the California Department of Alcoholic Beverage Control, the eatery's Type 47 license is currently set to expire May 31, 2019.