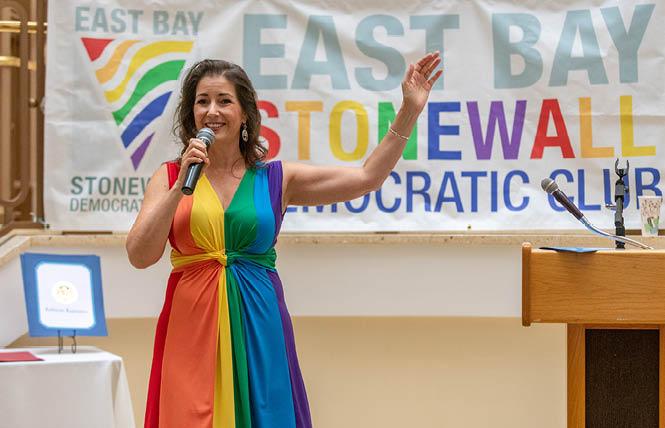 An LGBT political club focused on Alameda County has endorsed Oakland Mayor Libby Schaaf's re-election campaign. But the club failed to coalesce around one of the two Democrats running in the only competitive state Assembly race in the Bay Area with an out candidate.

In that contest, for the 15th Assembly District seat stretching from Oakland north to Richmond, lesbian Richmond City Councilwoman Jovanka Beckles is running against former Obama administration official Buffy Wicks. They are vying to succeed Assemblyman Tony Thurmond (D-Richmond), who is running to be elected state superintendent of public instruction in November.

The East Bay Stonewall Democratic Club voted Thursday night (September 13) on endorsements in the two marquee races and a number of other November contests in several East Bay cities. To secure the club's support, a candidate needed to receive 60 percent of the vote.

Ahead of the June primary the Stonewall club had failed to endorse any candidate in the Assembly race. While Wicks had been endorsed by a number of Stonewall's leaders after landing in the top spot in the primary, it remained uncertain that she would meet the threshold required to secure the full club's endorsement.

John Bauters, chair of the Stonewall club's political action committee, would not disclose the vote results or if either candidate had come close to securing the endorsement. He was among the club members to individually endorse Wicks.

"Assembly District 15 was fortunate to have many qualified people during the primary race and that did not change between the primary and general election. And the constituents of our district would be fortunate to be represented by either Jovanka or Buffy," said Bauters, a gay man on the Emeryville City Council currently serving as his city's mayor.

In July, the Lambda Democratic Club of Contra Costa County threw its support behind Beckles in the general election. The LGBT club had backed a different lesbian candidate in the primary.

"I think Libby Schaaf demonstrated to people in our club that she is competent as the mayor of Oakland," Bauters said.

Nine people are trying to oust her from office, with many progressives supporting Cat Brooks. Lesbian Oakland At-Large City Councilwoman Rebecca Kaplan endorsed Brooks rather than mount another mayoral bid of her own this fall. Last Tuesday night the Harvey Milk LGBTQ Democratic Club, the progressive political group based in San Francisco, voted to support Brooks.

In the races for the Oakland City Council's District 4 and District 6 seats, no candidate was able to secure the Stonewall club's endorsement. The District 4 seat is open due to Councilwoman Annie Campbell Washington's decision not to seek re-election.

Among the seven people seeking to succeed the incumbent are Sheng Thao, a single mother who is Kaplan's chief of staff, and Pamela Harris, a nonprofit finance professional and documentary filmmaker. Harris, a married lesbian mother who also identifies as bisexual, is a former Stonewall board member.

In District 6, Councilwoman Desley Brooks is running for re-election and fending off four challengers for her seat. Among them is Stonewall club member Maria L. "Marlo" Rodriguez, a lesbian who is a registered nurse.

Stonewall last month had early endorsed Oakland City Councilman Abel Guillén, who identifies as two spirit, in his bid for a second four-year term. He is facing a strong challenge for his seat from Nikki Fortunato Bas, who stepped down last month as executive director of the Partnership for Working Families.

Berkeley council contests, other city races
In Berkeley, the Stonewall club failed to endorse any candidate in the contests for the District 1, 4, and 7 seats on the City Council. It had early endorsed lesbian City Councilwoman Lori Droste's re-election bid for her District 8 seat.

Droste first won election to the council four years ago. Challenging her in November are planning commissioner and attorney Mary Kay Lacey; designer and artist Alfred Twu, who is nonbinary; and green transportation designer Russ Tilleman.

The race for the District 7 seat is open due to gay City Councilman Kriss Worthington opting not to seek re-election this year. He is backing a straight candidate, Rigel Robinson, to succeed him. Also in the race are Cecilia "Ces" Rosales, a lesbian small business owner who serves on Stonewall's board, and dog walker Aidan Hill, who is nonbinary and attended UC Berkeley.

In the city of Piedmont, Councilman Tim Rood, "a proud LGBT single parent of two recent Piedmont High grads," as he told the club, secured Stonewall's support for his bid to be re-elected to a second four-year term. This is his first time running as an out candidate; during his previous campaigns for a council seat he was married to the mother of his children.

United States Navy veteran Shawn Kumagai also picked up Stonewall's endorsement in his bid to become the first LGBT person to serve on the Dublin City Council. An instructional design consultant at Mosaic working on a project for PG&E and a master chief petty officer in the Navy Reserve, Kumagai adopted his stepbrother after their mother died in 2015.

In the race for the open District 4 Fremont City Council seat, Stonewall backed Debra Watanuki, the former chair of the city's Human Relations Commission. Among the five candidates in the contest is Justin Sha, a gay man who graduated from UC Hastings College of the Law this year and was endorsed by the Milk club last week.

He entered the race in hopes of ensuring that Yang Shao, currently president of the city's school board, doesn't win due to his opposition to LGBT inclusive sex-ed curriculum. Sha did not complete Stonewall's questionnaire by the deadline to do so and therefore was unable to be considered for its endorsement.

Stonewall also endorsed James Aguilar, who will be appointed later this year to the Area 6 seat on the San Leandro Unified School District Governing Board since no one else sought the seat. Gay and 18, he is a freshman at San Francisco State University.

He is succeeding Victor Aguilar Jr., a gay man who is on Stonewall's board and seeking the District 3 seat on the San Leandro City Council. Yet he did not request the club's endorsement of his council candidacy.

Out BART board candidate holds fundraiser
Janice Li, a queer bicycle advocate seeking the District 8 seat on the board that oversees the BART regional public transit agency, is hosting a fundraiser this week to introduce herself to voters.

Out BART board member Bevan Dufty, a gay man who formerly served on the San Francisco Board of Supervisors, is expected to attend the event, as are current Supervisors Aaron Peskin and Jane Kim.

"It'll be a great way for people to get to know me," Li, who is Chinese-American, told the B.A.R. in an email about the fundraiser.

"Given everything that's happened in recent weeks, I think it's important to uplift API LGBTQ folks," added Li, referring to the controversy involving a Chinese candidate for school board who dropped out of the race due to her past transphobic stances.

The BART seat is open because the current officeholder, Nick Josefowitz, is running for San Francisco supervisor in District 2. The transit district oversees three of the city's BART stations - Embarcadero, Montgomery, and Balboa Park - some of the transit agency's busiest.

Also in the BART race is William Walker, a gay man who was a student trustee on the college board but lost his bid for an elected seat on the body. The other candidates are Jonathan Lyens, who is blind and works at the San Francisco Department of Public Health; Melanie Nutter, a former head of the San Francisco Department of the Environment; Brian J. Larkin, who lost a 2016 bid for the city's District 1 supervisor seat; and Eva I. Chao.