Online Extra: Political Notes: With incumbents off the ballot, SF school board race is wide open 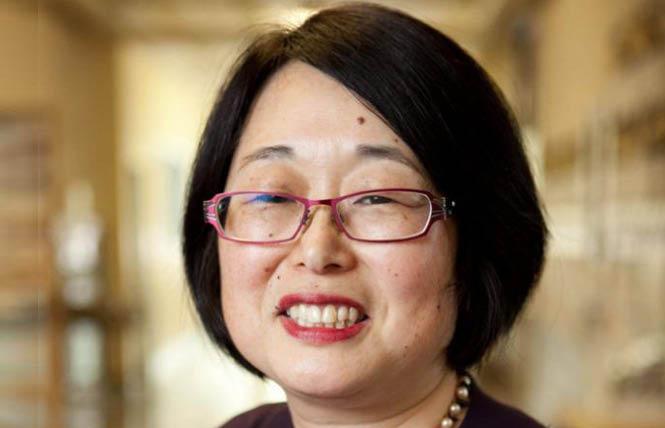 With San Francisco school board member Emily Murase failing to make the ballot, all three seats on the oversight body up for grabs this year are now open.

It gives the five out candidates among the 19 people who did qualify for the November election better odds of winning. There are two transgender candidates, two gay men, and a gay woman running in the citywide race for the trio of seats on the seven-person school board.

The deadline for candidates to file had been extended until August 15 because two of the incumbents opted not to seek re-election this year. Shamann Walton is instead running for District 10 supervisor, while Hydra Mendoza-McDonnell recently resigned her seat due to moving to New York City for a job with its school district.

The third incumbent, Emily Murase, Ph.D., had sought to be re-elected. Yet she failed to qualify for the ballot, according to the city's election department.

She did not immediately respond to requests for comment from the Bay Area Reporter Thursday afternoon. Elections department Director John Arntz told the B.A.R. that Murase did not file her required paperwork by the 5 p.m. August 10 deadline for incumbents to do so.

He added that he did not believe she would file legal action in order to make the ballot.

In a statement Murase posted to her campaign website late Thursday night (August 16 - https://www.emilymurase.com/), she blamed faulty information given to her by an elections department staffer for why she did not file in time.

While she said she had "terrible news" to share, Murase also took a lighthearted approach to her being unable to serve on the school board another four years, noting it would free up time for her to do such things as binge watch celebrated TV shows such as the LGBT favorite "Pose."

Having no incumbent in the race increases the chances of seeing at least one of the out candidates join the oversight body. Until last year, it had been eight years since the school board, which oversees the San Francisco Unified School District, had a member on it from the LGBT community.

Gay school board member Mark Sanchez was elected to the school board two years ago and seated in January 2017. Having previously won a seat on the board years ago, Sanchez had stepped down from the body at the start of 2009, as he ran unsuccessfully the year before for supervisor rather than seek re-election to his seat on the education board.

Prior to his winning his school board seat back in November 2016, all of the other out candidates who had run for school board in the preceding eight years had lost.

He could become the second transgender male official in the state. Wednesday, Adam Spickler learned he will become the first transgender male public official in California as he was the sole person to seek a community college board seat in Santa Cruz County. He will now be appointed later this fall in lieu of having to seek election on the November ballot.

The two gay men in the school board race are educators Connor Krone and Phil Kim. Krone grew up in San Francisco and, after college, taught in Philadelphia schools through the Teach for America program. He now runs Money Study, a San Francisco-based non-profit that provides financial education to high school students.

Kim is a charter school employee who came up short in his 2016 school board bid. He is aiming to be the only LGBT Asian-American currently holding public office in the city.

Longtime San Francisco fire lieutenant Lenette Thompson is a gay mother of four. The family lives in West Portal and her children are the fourth generation in her family to be raised in San Francisco.

Like Rawlings-Fein, a married father of two, and Thompson, there are a number of parents with various ties to the city's public schools in the race. They include Michelle Parker, Monica Chinchilla, Alida Fisher, Alison Collins, Lex Leifheit, Faauuga Moliga, Roger Sinasohn, Li Miao Lovett, and Josephine Zhao, who has been criticized for past comments against transgender rights she now disavows.

Gabriela Lopez, a teacher in the district, is also running, as is John D. Trasviña, who stepped down in June as dean of the University of San Francisco School of Law.

Monday night the city's more moderate Alice B. Toklas LGBT Democratic Club endorsed Murase and Parker but took no position on who should be endorsed for the third school board seat. Asked if the club will revisit its endorsements in the race due to Murase not making the ballot, Alice co-chair Eric Lukoff told the B.A.R. Thursday that no decision had been made yet.

"Since it just happened, we're going to consider our options before we decide anything," he wrote in an emailed reply.

The Harvey Milk LGBTQ Democratic Club early endorsed Satya and will vote on also endorsing Collins and Lopez at its meeting Tuesday (August 21).

The B.A.R. will have more on the various school board candidates in its special "Back to School" issue Thursday, August 23.

College board incumbents seek re-election
All three board members who oversee City College of San Francisco up for re-election this year qualified for the November ballot. One challenger also entered the race, and unlike previous elections, none of the four candidates are LGBT.

Incumbent college board members Thea Selby, John Rizzo, and Brigitte Davila, the current board president, are seeking to be re-elected to four-year terms. Also running is Victor Olivieri, Ph.D., a veteran and former administrator at UC Riverside who now works for a nonprofit that helps other vets find work in the tech sector.

This week, the Alice club endorsed Selby, Davila, and Olivieri in the race. The Milk club will vote Tuesday night on backing all three of the incumbents.

William Walker, a gay man who was a student trustee on the college board but lost his bid for an elected seat on the body, and Janice Li, a queer bicycle advocate, are among the six candidates seeking the seat. It is open because the current officeholder, Nick Josefowitz, is running for San Francisco supervisor in District 2.

The district oversees three of the city's BART stations - Embarcadero, Montgomery, and Balboa Park - some of the transit agency's busiest.

The Milk club will vote Tuesday night on backing Li in the race. No candidate was able to meet the 60 percent threshold needed to secure the Alice club's endorsement.

There are already two out members on the nine-person BART board: gay District 9 Director Bevan Dufty and lesbian District 3 Director Rebecca Saltzman.