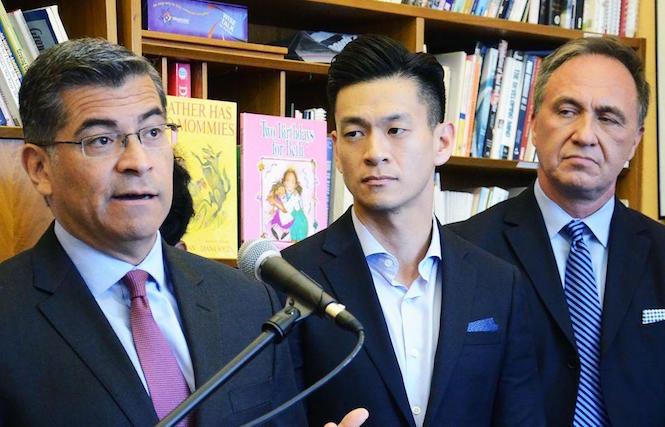 At a news conference in San Francisco Friday, state Attorney General Xavier Becerra, joined by Assemblyman Evan Low and Equality California's Rick Zbur, announced that Oklahoma will be added to the list of restricted states for state-funded and state-sponsored travel. Photo: Rick Gerharter

On the first day of Pride Month state Attorney General Xavier Becerra announced Friday (June 1) that Oklahoma will be added to the list of restricted states for state-funded and state-sponsored travel under Assembly Bill 1887.

The bill, authored by gay Assemblyman Evan Low (D-Campbell) and passed in 2015, bans state-funded travel to states that discriminate against LGBT people.

Becerra's decision came after Oklahoma Governor Mary Fallin (R) signed an anti-LGBT bill into law in early May that allows child welfare organizations - including adoption and foster care agencies - to deny qualified LGBTQ couples and other individuals seeking to adopt or foster a child on the basis of religious beliefs. The bill also would allow the denial of interfaith couples, single parents, and married couples in which one prospective parent has previously been divorced. The bill is now the first anti-LGBTQ state bill signed into law in the country this year, but does not take effect until November.

"The state of Oklahoma will join the list of other states that California has recognized that do not treat all LGBT brothers and sisters in this country with open arms," Becerra said at the news conference. "California will once again show we are welcoming, diverse, and inclusive of all people and protect the LGBT community."

He also added that he does not wish to see the travel ban list grow. With the addition of Oklahoma, the list now includes nine states: Texas, Alabama, Kentucky, South Dakota, Mississippi, North Carolina, Tennessee, and Kansas.

The city of San Francisco maintains a similar travel ban policy list. The Board of Supervisors voted to include Oklahoma to the list at its June 4 meeting. The list now mirrors that of the state's, though the ban for the city will not go into effect for Oklahoma until November when the anti-LGBT law takes effect in the state.

At the news conference, Low said, "We do not take enjoyment in this announcement, but as we celebrate Pride Month we reflect on the struggles [the LGBT community] has today. It is imperative that we continue to advance the equality of all people."

"This is not just a policy argument. This is about real lives," he said. "For states like Oklahoma and Kansas to say LGBT people are somehow less than, or unworthy, of the fundamental human experience to provide a loving home to kids simply because of who they are or what their family looks like is antithetical to what we stand for."

He provided statistics that there are more than 55,000 children in the California foster system and two million LGBT adults who have expressed interest in adopting or fostering a child.

Adoptive parent and gay man Stephen Botte was there with his 11-year-old adopted son, Francisco Botte.

"My family would not exist today if California had passed this law," he said. "For a child to lose out on the opportunity to have a forever family sends a terrible message to the LGBTQ community that we are different or wrong in some way. Let me tell you we are not."

His son spoke as well.

"This law makes me feel pretty sad because if the law was passed in California, I wouldn't be with my amazing family," said Francisco.

AB 1887 bans state employees from using taxpayer funds to travel to the states on the list. In addition to San Francisco, other cities that have similar travel ban policies for their municipal employees include Richmond and Santa Cruz.

The Human Rights Campaign also condemned the Oklahoma bill in a news release sent out May 11.

"It is shameful that Gov. Mary Fallin has signed into law a patently discriminatory law that targets children," said JoDee Winterhof, senior vice president of policy and political affairs at HRC. "Governor Fallin has cemented her legacy, siding with discrimination and the Legislature in throwing kids under the bus to create a 'license to discriminate' against LGBTQ Oklahomans. With this action, Oklahoma has the negative distinction of being the only state to sign an anti-LGBTQ bill into law this year. Oklahoma's leaders must live with that, and live with the reputational fallout that it may bring. This is wrong."