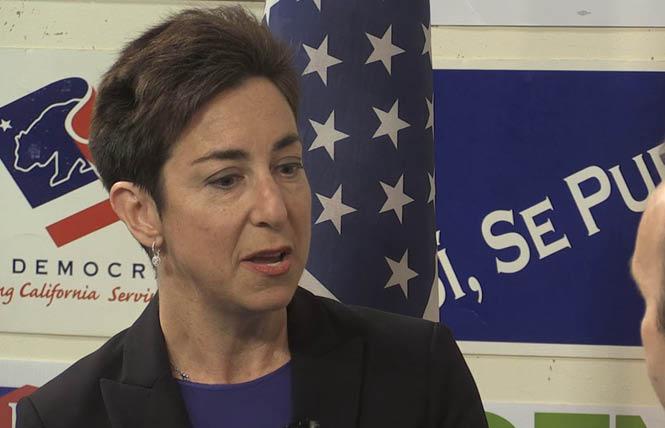 Susan Ellenberg was one of two candidates running for the District 4 seat on the Santa Clara County Board of Supervisors to be endorsed by the current occupant, gay Supervisor Ken Yeager. Photo: Courtesy YouTube

LGBT leaders have dual endorsed in the race on the June 5 primary ballot for a Santa Clara County Board of Supervisors seat currently held by the body's lone gay member.

Supervisor Ken Yeager, the only LGBT person ever elected to the South Bay board, is barred from running for re-election this year due to term limits. In a sign of the weak bench of out officials in the county, which includes San Jose, no LGBT candidates filed to run for Yeager's District 4 seat or to challenge District 1 Supervisor Mike Wasserman, whose seat is the only other one up this year.

Yeager, the first LGBT person to serve on San Jose's city council, represents the Rose Garden, Willow Glen, and west San Jose neighborhoods of his hometown, as well as the cities of Campbell and Santa Clara, and the unincorporated Burbank and Cambrian neighborhoods. He was first elected to his supervisor seat in June 2006.

Last Tuesday, April 10, Yeager announced he was endorsing both Susan Ellenberg and Don Rocha to succeed him. Rocha currently serves on the San Jose City Council and had been on the Cambrian School Board, while Ellenberg is a San Jose Unified School District trustee and appointed member of the Santa Clara County Commission on the Status of Women.

In a statement Yeager noted that he has "worked alongside Don on issues affecting both the city and the county, such as the potential development of the Cambrian Park Plaza and matters of public health." He added that he appreciates Rocha's "dedication to serving all of the residents in his district, including listening to the concerns of those living in unincorporated pockets."

As for Ellenberg, Yeager noted that her "experience in the education sector, promoting diversity, advocating for women, and making safer spaces for children give her unique insight into the needs of the people the county serves. Her passion, vision, and genuine care make her a committed advocate for the residents of District 4."

"We believe that these two candidates would be committed and best positioned to continue Ken Yeager's strong legacy in advancing LGBTQ rights," stated the club in a news release.

It came several weeks after BAYMEC hosted a forum with five of the candidates running to succeed Yeager. In addition to its endorsed candidates, the trio that also took part in the March 22 forum was lawyer and former Campbell City Councilman Jason Baker, Santa Clara Councilman Dominic Caserta, and former San Jose City Councilman Pierluigi Oliverio, who had held Yeager's old council seat.

(The two other candidates in the race did not submit endorsement requests to BAYMEC and were therefore not eligible to be considered.)

In his endorsement announcement, Yeager did commend Baker and Caserta for their "strong, conscientious campaigns."

Meanwhile, BAYMEC raised concerns about Oliverio's platform for supervisor and questioned if he would continue to support the various LGBT initiatives that Yeager has championed, from the formation of a special county office on LGBT issues to increasing funding for HIV prevention programs and AIDS services.

BAYMEC contended that Oliverio has "an overly narrow view of the county's role that runs afoul to the progress our current Board of Supervisors has made for the LGBTQ community."

It went on to state that "it's not enough to support raising the rainbow flag; we need bold commitments in funding, policy and services. We are not convinced that Pierluigi Oliverio would prioritize these needs or the progress Ken Yeager has made for the LGBTQ community, and are very concerned that those achievements may be put at risk."

Should no candidate in the race surpass 50 percent of the vote in June, the top two vote-getters will square off in November. No matter the outcome, once the winner is sworn into office it will mark the first time in 12 years that only one of the nine Bay Area counties - San Francisco - has an openly LGBT supervisor.