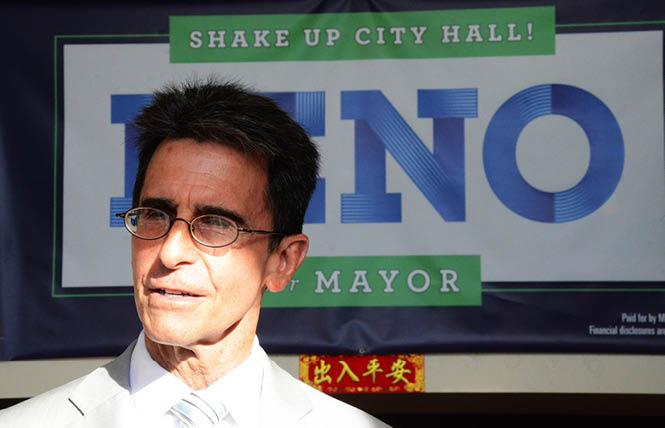 A poll conducted by labor groups and a statewide LGBT advocacy group has gay former state lawmaker and supervisor Mark Leno ahead again in the race to be San Francisco mayor.

Leno is aiming to be elected the city's first out mayor in the special election on the June 5 primary ballot. Polls earlier this year had shown him holding an edge against his three main opponents in the race but then slipping in the rankings in polls conducted in late February.

The latest poll of 610 likely voters, conducted March 28 through April 3 by Greenberg Quinlan Rosner Research, had Leno at 28 percent when voters were asked who their first choice for mayor would be if the election were held that day.

Board President London Breed, who briefly served as acting mayor upon the death December 12 of the late mayor Ed Lee, was in second with 27 percent, while District 6 Supervisor Jane Kim was in third with 17 percent.

Without reading any of the candidate bios, the likely voters when then asked who their ranked choices in the race were. Under the city's instant voting runoff system, voters can rank in order up to three choices for mayor, with the candidates with the least votes eliminated and their voters' second and third choices tabulated until someone reaches 50 percent plus one of the vote to win.

In the first round, Leno came out first with 31 percent, Breed second with 30 percent and Kim in third with 19 percent. Leno remained in first place through the consecutive rounds, landing in the fifth round with 39 percent. Breed had 37 percent and Kim was third with 24 percent.

In the sixth round Leno emerged the winner with 52 percent, while Breed was at 48 percent.

Equality California, the statewide LGBT advocacy organization, helped pay for the poll, conducted via both online and by phone, with a coalition of labor groups. A source at EQCA, which sole endorsed Leno in the race, confirmed the polling results when contacted by the Bay Area Reporter about them.

During an editorial board meeting with the B.A.R. Thursday morning, Leno had indicated there would soon be new polling released on the mayoral contest that showed him again as the frontrunner.

"There are one or two polls soon that have me as number one," Leno said.

The poll is a turnaround for Kim, who garnered headlines in early March when a poll commissioned by the city firefighters union had her "surging" in the mayor's race, as a headline in the San Francisco Chronicle touted.

Leno also disclosed to the B.A.R. that his second choice in the race is Kim, while his third choice is Alioto. Both Kim and Alioto have said Leno is their second choice, and Leno indicated there is the likelihood of the candidates running a coordinated ranked-choice campaign in order to ensure Breed does not win.

"We shall see how the next seven weeks will unfold," said Leno.

In an editorial board meeting with the B.A.R. Thursday afternoon Breed downplayed the polling in the mayor's race.

"I don't think that is going to happen," she said of seeing Leno win the race. "I don't put a lot of stock in polls. They are just a moment in time. I try to focus on putting myself out there and talking to voters. I have a lot of momentum out there."