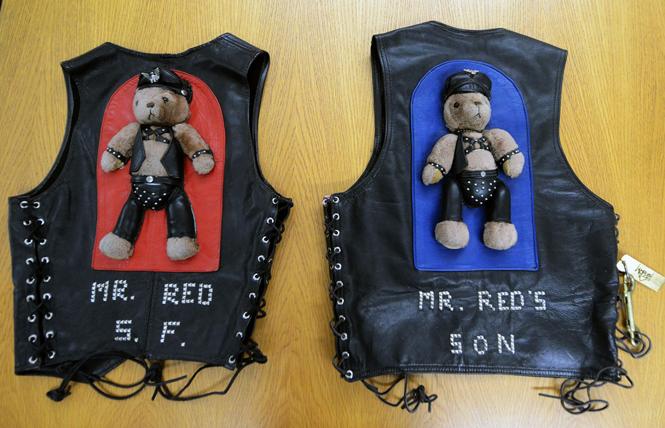 Editor's note: This is the third in a five-part series for LGBTQ History Month featuring objects that one day could be exhibited in a new, full-scale LGBTQ Museum and Research Center in San Francisco.

The cute, furry faces of teddy bears provide a whimsical detail to the back of two leather vests worn by leathermen in a daddy and son relationship. One sports red fabric encircling the plush toy and was owned by Mr. Red S.F. The one worn by Mr. Red's Son is denoted with a blue background.

On the front of both vests are pins featuring mini handcuffs and the flag adopted by the leather community. The son's vest is affixed with a pin declaring him "Daddy's Boy," while Mr. Red's includes a teddy bear waving the rainbow flag.

The pair of leather vests stitches together a larger tale of the LGBT community's kink subculture. They visually represent a story woven in artistic talent, unique personal relationships, and of course sexual practices.

The adornments are stunning pieces not only for their craftsmanship but also for showcasing how talented of a leather artisan Mr. Red was. His name was Michael "Red" Bentzinger and he died due to AIDS complications May 12, 1995, two days after turning 51.

The historical society has yet to mount an exhibit that included the leather vests at its jewel box of a museum it operates out of a leased storefront in the heart of the Castro, San Francisco's LGBT neighborhood. In the recently mounted special installation "The Mayor of Folsom Street: The Life and Legacy of Alan Selby, aka Mr. S," there wasn't enough room to display the garments made by Bentzinger. He had worked as a manager at Mr. S Leather, which Selby opened in San Francisco's South of Market neighborhood in June 1979.

"In our temporary exhibit now on display we didn't have the space for these items, as precious as they are," explained Beswick during an interview in August, a month before the show closed. "They could some day be part of an exhibit exploring the fun and kink frivolity of the leather community. I really wish we had them on permanent display."

The historical society doesn't have much documentation about the vests or Bentzinger. Nor does it know who his son was, information it hopes someone who knew the men could provide it with.

"We would like to hear from people who patronized his services and know more about his background and biography," said Kelsi Evans, director of the historical society's Dr. John P. De Cecco Archives & Special Collections. "We rely so much on the community for their feedback on items."

Bentzinger advertised in the Bay Area Reporter his custom leather, repairs, and alterations he provided out of a location on 18th Avenue on the edge of the city's West Portal neighborhood. His obituary in the B.A.R. noted that prior to moving to San Francisco he had owned and operated a successful antique and clock business in Scotland.

A letter in the March 24, 1983 issue of the B.A.R. from George Clements, membership committee chair of BWMT, or Black White Men Together, commended Bentzinger and Eric Penigar, an employee and conceptual artist of Mr. S Leather, for their "Fourth Annual January Black Sale" advertisement that ran in the paper's January 20 issue that year. It featured a black man wearing a leather cap, jacket, and pants leaning against a brick wall.

Clements noted that the members of the BWMT San Francisco chapter felt "the ad was a major step forward in fighting racism by (1) projecting a positive image of Black-Gay-Maleness to the community and (2) demonstrating that non-White images can, in fact, be valuable assets in advertising."

Line of teddy bears
Bentzinger gained notoriety for creating a line of leather teddy bears, which his obit said were first produced in the early 1980s. In his leather column in the April 17, 1997 B.A.R., the late "Mister Marcus" Hernandez explained, "In his capacity as the manager of the original Mister S Leather store and a leather tailor par excellence, Red created a big stir in leather circles when he launched his teddy bears at $125 a pop."

As for how Bentzinger's vest and that of his son ended up in the possession of the archival group, Hernandez wrote that the staff of the now-closed Worn Out West clothing store in the Castro had donated the vests to the historical society after someone came in trying to sell them through the consignment shop.

The vests are the only ones that have teddy bears on them in the historical society's archive, which does include a stuffed teddy bear. The archival group's collection also includes leather whips, paddles, and myriad versions of motorcycle caps. There are also leather slings — one owned by Selby was hung from the ceiling in the recent show — that people have donated and one day could be integrated into a gallery in the new museum devoted to leather culture.

Displaying such items and materials for the public, however, presents challenges for museum curators. As the historical society officials noted, they need to be handled with extra care as touching them with one's hands can leave oils on the fabrics.

The design of any future museum exhibit, noted Evans, would need to take into consideration how to properly display such objects so they were not damaged.

"We would need to talk to specialized leather conservators on how they could display it and how to preserve it," she said.

Using Selby's sling as one example, Beswick contemplated, "We could do a reproduction of it so people could sit in it," so the original wouldn't be destroyed.

Bentzinger's vests would hold particular visual interest for visitors, said Evans, should they one day be exhibited in the historical society's future museum. She envisioned mounting them on mannequins so museumgoers could see how Bentzinger and his son would have worn them.

"They are amazingly beautiful, these leather vests," said Evans, adding that the garments could also illustrate more than just how leathermen dress. "We can get into what the relationship is between a dad and son."

Such a partnering goes deeper than mere sexual interest. As Bentzinger told the B.A.R. in the January 1 issue of 1984, when asked for his New Year's wish, he hoped that men continued to "realize that the real beauty and worth of a man lies within. The beautiful package is very appealing, but the real treasure is what's inside — worthy of time and energies spent to cultivate stronger friendship and brotherhood."