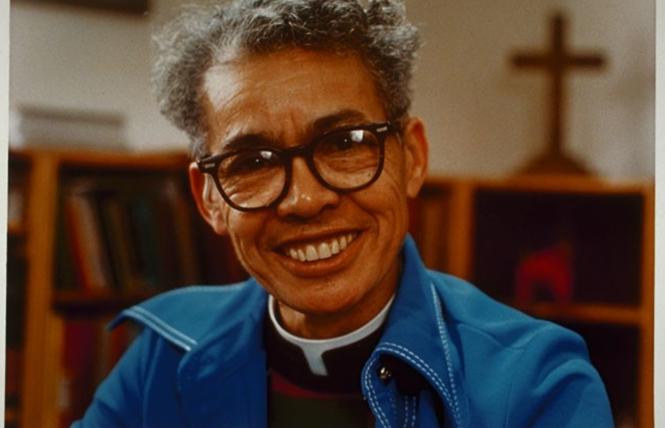 [Editor's note: Philadelphia Gay News, which distributed this article, is using she/her pronouns in keeping with Pauli Murray's own writings, but Murray was a transmasculine and gender-nonconforming lesbian.]

Some say Pauli Murray is the most important American activist you've never heard of. An iconoclastic, socialist-leaning, gender-fluid feminist and Black civil rights activist, Murray broke barriers in every aspect of her life. And the paths Murray created single-handedly and single-mindedly changed history.

Murray is, in many respects, the one-name answer to why we need LGBTQ History Month. Murray's quest to find herself as someone who variously identified as a woman, a man, and as neither, ran parallel to Murray's search for racial and gender parity in American society and the law.

When Murray died at 74 in 1985 she was an ordained Episcopal priest. But she was also an attorney; a much-published poet, essayist, and memoirist; and a legal scholar who had fundamentally altered civil rights law. Murray had created new feminist theory and lived a lesbian life for decades. Murray's was a life of firsts: first Black woman law school graduate at Howard University, first Black person to earn a JSD (doctor of the science of law) degree from Yale Law School, first Black woman ordained as an Episcopal priest.

Murray's legal writings were the predicate for Thurgood Marshall's segregation-shattering 1954 U.S. Supreme Court case, Brown v. Topeka Board of Education. And her name was also listed as co-author on the brief argued by Ruth Bader Ginsburg in 1971 in Reed v. Reed. Years later Ginsburg said, "We knew when we wrote that brief that we were standing on her shoulders."

Ginsburg worked with Murray when they were on the board of the American Civil Liberties Union. She described Murray as "independent, intelligent, poetic, feisty, determined, confident in her counsel."

Murray's associations were disparate as they were intriguing. Murray was a lifelong friend (but not lover) and confidant of Eleanor Roosevelt, whom Murray met while working at a conservation camp. Murray was a friend of gay novelist and playwright James Baldwin, with whom she shared space at the MacDowell writer's colony the first year Black writers were admitted. Murray also co-founded the National Organization for Women with Betty Friedan and others.

Born in 1910 in Baltimore as Anna Pauline Murray, she was orphaned early in life. Her mother died of a cerebral hemorrhage when she was only 3 and her father was soon committed to a local asylum where he was beaten to death by a white guard when Murray was 12.

"The most significant fact of my childhood was that I was an orphan," Murray said.

Raised in the Deep South by her maternal grandparents and the maternal aunt, Pauline, for whom she was named, Murray aspired to go to college and set her sights on Columbia. At 16 she moved to New York City where she lived with another aunt and began her battle for equity in a dramatically unequal America.

But that aunt and her family lived in a white neighborhood and were passing as white. Murray's presence as a Black teen in the home was a source of conflict with the neighbors, so soon she was on her own, according to a 2016 Boston Review article on Patricia Bell-Scott's "The Firebrand and the First Lady: Portrait of a Friendship: Pauli Murray, Eleanor Roosevelt, and the Struggle for Social Justice."

Murray's life was, in many respects, defined by who she wasn't, according to Bell-Scott's book. Not white, not male, not wealthy. She was easily pulled into a fight against injustices. In 1940, while traveling with then-girlfriend Adelene McBean, in Petersburg, Virginia, the couple refused to take broken seats at the back of the bus — 15 years before Rosa Parks' historic refusal. Murray and McBean were arrested and charged.

Yet Murray was already deeply invested in civil rights actions. She had applied to Columbia and was told they did not admit women. She tried to fight it, but attended Hunter College instead. After her graduation, Murray applied to the Ph.D. program in sociology at the University of North Carolina, Chapel Hill, but was informed the school did not accept Negro students.

Within this landscape of gender and racial segregation, Murray forged ahead, attempting to fight the segregation at UNC. (In 2021, as was widely reported, UNC denied tenure to Black scholar and MacArthur fellow Nikole Hannah-Jones, who authored the controversial Pulitzer Prize-winning "1619 Project." After UNC belatedly offered her tenure, Hannah-Jones declined the position and joined the faculty at Howard University.) The NAACP declined to take Murray's case; records suggest that Murray's lesbian sexual orientation posed a conflict for the organization.

It was while attending Howard University School of Law as the only female student that Murray authored her defining treatise on "Jane Crow," according to the Pauli Murray Center for History and Social Justice in Durham, North Carolina. In 1944 she graduated first in her class, but was denied the Julius Rosenwald Fellowship for post-graduate work at Harvard University, despite a letter of support from sitting President Franklin D. Roosevelt.

Murray's response was characteristic. "I would gladly change my sex to meet your requirements," she wrote, "but since the way to such change has not been revealed to me, I have no recourse but to appeal to you to change your minds. Are you to tell me that one is as difficult as the other?"

She would later write, "When my brothers try to draw a circle to exclude me, I shall draw a larger circle to include them. Where they speak out for the privileges of a puny group, I shall shout for the rights of all mankind."

Murray went on to earn a master of law degree from UC Berkeley in 1945, writing her thesis on employment rights. 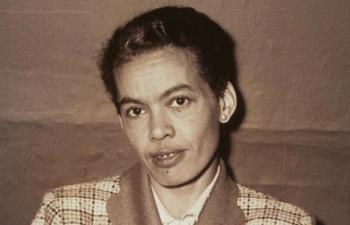 Personal conflict
This conflict over the rules of gender and race was fundamental to her life's work. But concomitant with that was her personal conflict over her lesbianism and her gender identity. Both caused her such emotional turmoil that she was frequently hospitalized for mental breakdowns. (It was while being committed to Bellevue Hospital in New York that she met McBean.) Murray had gone to doctors to attempt to discover whether she had hidden male organs and was devastated to find she did not, according to the Boston Review article.

At various times in her early life, Murray identified as a man and dressed in androgynous clothing throughout most of her life. As the Pauli Murray Center details, "Murray actively used the phrase 'he/she personality,' during the early years of their life. Later in journals, essays, letters and autobiographical works, Pauli employed 'she/her/hers' pronouns."

Had she lived in a more accepting and tolerant time, she might have transitioned or she might have accepted her lesbianism. In examining Murray's life, biographers have used different pronouns and made different projections. What is true — perhaps heartbreakingly so — is that Murray never felt comfortable with her gender identity or sexual orientation, even as she wrote continually about how it framed her/their life.

Murray wrote that she was attracted to "extremely feminine and heterosexual women," and her decades-long relationship with Irene "Renee" Barlow was the most sustaining of her life. Yet that partnership was also a source of conflict for her. She destroyed most of their correspondence and wrote of their relationship in third-person narrative in her memoirs.

In "Song in a Weary Throat: Memoir of an American Pilgrimage," Murray wrote, "In January 1973, Murray lost Barlow to cancer. By September, she had resigned from Brandeis University [where she taught] and entered the General Theological Seminary. The year after she earned her Master of Divinity degree, she became the first African-American woman to be ordained an Episcopal priest."

One could write pages on Murray and still barely scratch the surface of her remarkable life. The complexity of Murray as a scholar, writer, and activist is infinitely compelling. The complicated nature of her personal struggles has deep resonance now, highlighting the perils of discrimination against women, people of color, and LGBTQ people.

Perhaps this quote of Murray's is in the end the most significant: "If anyone should ask a Negro woman in America what has been her greatest achievement, her honest answer would be, 'I survived!'"

The new documentary "My Name is Pauli Murray" was released on Amazon Prime Video this month. Read more about Murray at the Pauli Murray Center archive.


Victoria A. Brownworth is a Pulitzer Prize-nominated award-winning journalist whose work has appeared in the New York Times, the Los Angeles Times, the Philadelphia Inquirer, Baltimore Sun, DAME, the Advocate, and Curve among other publications. She is the Bay Area Reporter's television columnist. She was among the OUT 100 and is the author and editor of more than 20 books, including the Lambda Award-winning "Coming Out of Cancer: Writings from the Lesbian Cancer Epidemic" and "Ordinary Mayhem: A Novel," and the award-winning "From Where They Sit: Black Writers Write Black Youth" and "Too Queer: Essays from a Radical Life."

LGBTQ History Month: Corinne known for her photos of lesbian sexuality
Sign up!