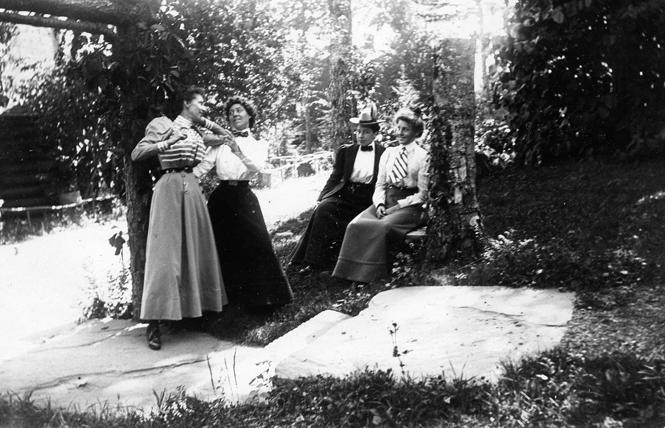 It's been a long time coming, but officials at the Alice Austen House on New York's Staten Island have thrown open the closet door, now fully embracing the lesbian pioneer and photographer who lived in the house with her longtime partner, Gertrude Tate.

Since the Bay Area Reporter's initial story on the small museum in 2016, the Alice Austen House, also known as Clear Comfort, has been designated a National LGBT Historic Site and was awarded a $250,000 grant from the National Endowment for the Humanities. Both of those occurred in 2017 and began the process to more fully depict Austen's life as a lesbian. Historians used the NEH grant to reinterpret Austen's story to more fully include Tate.

The house sits along New York Harbor near the Verrazzano-Narrows Bridge. The museum grounds also include a rainbow flag joining the U.S., New York City, and other flags on the front lawn flagpole, and it hosted several LGBTQ events for Pride Month in June. Open during the COVID-19 pandemic by appointment, the museum's interior has been completely redone, noted Victoria Munro, who became executive director in December 2017.

"The big challenge when I started [was] we were at the beginning of the journey," Munro, 45, told the Bay Area Reporter during a recent Zoom call. "We were fully accepting of the new interpretation but no work had been done, so I had to spearhead that project."

That meant immediately raising $150,000 in matching funds, she explained.

"It wasn't enough to get the [historic] designation and be applauded for it," Munro said. "The purpose of a museum is to provide access. There were only 20 photos on display before the renovation. Now, there are 150 photos and the text is an accessible size."

Munro, a lesbian originally from New Zealand, has a history in curation as an artist and trained educator. She wrote all of the text for the new permanent installation. The rooms in the house that are open to the public have been painted white, which brightens up the interior considerably. And many items have been removed.

"The dining room was full of furniture — none of which was Alice's," Munro said.

Austen, who was born March 17, 1866, was one of America's earliest and most prolific female photographers. And while she lived a life of privilege until her later years, she took many photographs of working-class people as well as women. She likely did not call herself a lesbian, Munro and other historians have said, but the LGBTQ community has long celebrated her.

"The big question, as it relates to LGBTQ History Month, is why don't more people know about Alice Austen?" Munro asked. "Daily, it's part of my work — Alice coming out of the closet."

"I said that it adds a lot of understanding to her work," Munro recalled. "A lot of her photographs were taken through a queer lens. She didn't mean them for public consumption but we're lucky to have them."

Some of the photos are of Victorian women's social lives outside of formal studio portraits, Munro explained.

"Alice was making portraits of strong women with bold gazes. She has a specific style that runs through her work," said Munro.

Munro said that there are myths that surround Austen.

"Talking about her, Alice Austen had clear ambitions to be a professional photographer, and many people claim that because she made no money, she wasn't professional," Munro said. "Not true. She did make money." 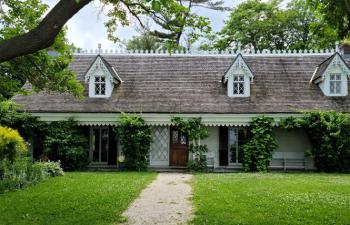 Board changes
Deborah Hernandez, an ally who is vice president of the museum's executive board, lives on Staten Island and has long known of the Alice Austen House.

"I was always curious about the house," she told the B.A.R. in a recent phone interview. "I knew a little about Alice, a photographer documenting immigrants and their stories."

Hernandez, 57, teaches at the Fashion Institute in New York City and specializes in textiles. She became a museum board member in 2018 at the urging of another board member who took a class of hers. She praised Munro's tenure and what she's accomplished.

"I've seen it evolve with better storytelling and to see her relationship with Gertrude," Hernandez said of the museum, adding that Austen "liked regular people."

"She photographed regular people," Hernandez said. "And she was brave and strong, carrying 50 pounds of equipment, getting in a boat, and going around. I'm sure people were cruel but she just kept on and, I think, started to pave the path for inclusion and equality."

Hernandez said the board is committed to that equitable storytelling.

"It's a big deal," she said. "I feel the board is maturing in that way. We have some younger people on the board now."

Hernandez added that the board make-up — there are 13 members — has changed as it is now more diverse. Hernandez herself is of Puerto Rican, Italian and German descent, she said. It's coming up with fundraising strategies and how to engage people in a safe way during the COVID-19 pandemic. Right now, Alice Austen House is open for visitors by appointment only. And, like other museums in New York City, people need to be vaccinated, except children under 12.

Future plans
Munro and Hernandez both said that future plans involve more people getting to know about Austen. That's not always easy on Staten Island, the most conservative of New York City's five boroughs. Already, Munro said, school students have visited the museum (pre-pandemic) and Austen is referred to as a lesbian.

"The kids have no issue," she said. "It's the teachers that give you a look sometimes."

"The ceiling's pretty low for our pay and it's hard to get money for operations," she noted. Her salary is $77,000.

But the museum recently got a $49,000 planning grant (over two years) from the Institute of Museum and Library Services.

Munro said that education is the key to changing people's minds, no matter why people come to the museum.

"If you come to Alice Austen House and to a water ecology project, it's queer because we're a nationally designated site — the house and the park.

"We're involved in ways to interpret the outdoors now," she added. "Queer ecologies and how landscape and plantings better reflect who Alice was."

Munro also said a plan of hers is to create an LGBTQ youth advisory board.

"Students could potentially work at Alice Austen house or intern," she said. 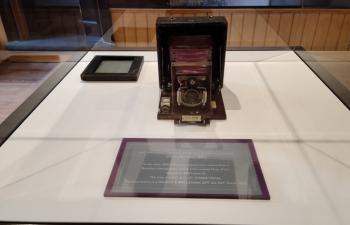 One of Alice Austen's cameras is now on display at the Alice Austen House. Photo: Cynthia Laird

Sad end to Austen's life
Austen's life ended sadly, as the B.A.R. recounted in the 2016 article. Austen mostly lived off her inheritance and money from some photographs she sold.

She and Tate opened a tea room on the lawn of the house, but it never generated enough income. From there, Austen mortgaged and re-mortgaged Clear Comfort.

"Austen's wealth was lost in the stock market crash of 1929 and she and Tate were finally evicted from their beloved home in 1945," the museum's website states. "Tate and Austen were separated by family rejection of their relationship and poverty. Austen was moved to the Staten Island Farm Colony where Tate would visit her weekly. In 1951, Austen's photographs were rediscovered by historian Oliver Jensen and money was raised by the publication of her photographs to place Austen in private nursing home care. On June 9, 1952 Austen passed away. The final wishes of Austen and Tate to be buried together were denied by their families."

For more about the Alice Austen House, click here.