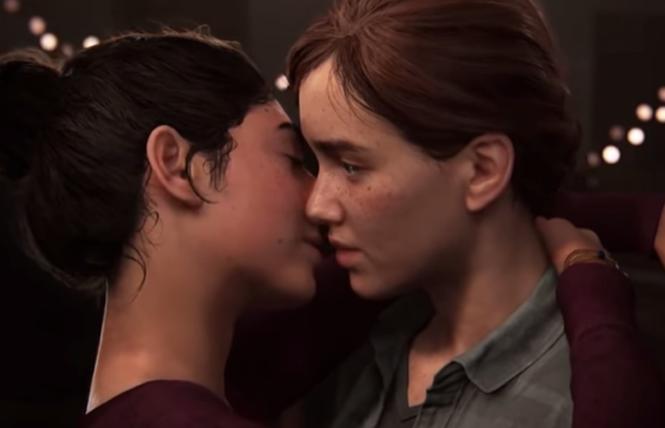 In the 2014 PlayStation 4 game "Dragon Age: Inquisition," Dorian is a powerful wizard who helps the main character save the world from a demon army. As the son of a powerful political family, Dorian trained in magical arts under the best instructors, and his life at first glance appears to be one of privilege. When interacting with the main character — controlled by the player — Dorian is unafraid to flaunt his pedigree and does little to hide his arrogance. He is also a romantic option for the main character to pursue, providing the player makes strategic, personal, and political choices that please him.

When he was younger, Dorian was forced to undergo conversion therapy (called "blood magic" in the game) by his father. But as it is in real life, the torture did not change Dorian's sexuality. Instead, it motivated Dorian to fight against the discrimination that befell him.

In addition to being the rare gay man in a mainstream video game, Dorian is also one of the even rarer gay men of color. Designer John Epler said, when asked about his nationality, that "Indian would be the closest real world analogue."

In the 70-year history of video games, from "Bertie the Brain" (1950) to "Pong" to "Super Mario Bros" to the sweeping, hundred-million dollar epics we see today, it took over 60 years for a gay person of color to show up as a major character in a mainstream release. But unlike the worries of past decades — that LGBTQ content would repel heterosexual consumers — Dorian's inclusion didn't sway people from partaking in the quest. "Dragon Age: Inquisition" ultimately sold millions of copies, and other big-budget games of the 2010s that featured same-sex relationships, including "Mass Effect 3," which featured another gay person of color in Steve Cortez, sold equally well.

Unsurprisingly, not many video game characters are LGBTQ. Like most businesses dominated first by white heterosexual men, inclusivity was not a priority for game designers and publishers. But LGBTQ characters did exist relatively early on in the industry, if one knew where to look. The 1986 computer game "Moonmist," about a detective investigating ghosts in a castle, featured a scorned lover who is thought to be the first lesbian video game character, though like many early queer characters — in books, films, and video games — it was not explicitly stated.

In 1989, during the advent of the World Wide Web, "Caper in the Castro," by most accounts the first LGBTQ video game ever created, was released for Mac and shared among early internet bulletin board systems. That same year, a trans character and a gay character were featured in the game "Circuit's Edge." And 1992 saw the release of adventure game "GayBlade," which pitted players against an evil, pixelated Pat Buchanan lookalike.

But while some LGBTQ video games and characters thrived in niche spaces in the 1980s and 1990s, the giants of the industry, Nintendo and Sega, and later on Sony and Microsoft, had little LGBTQ representation in their games. 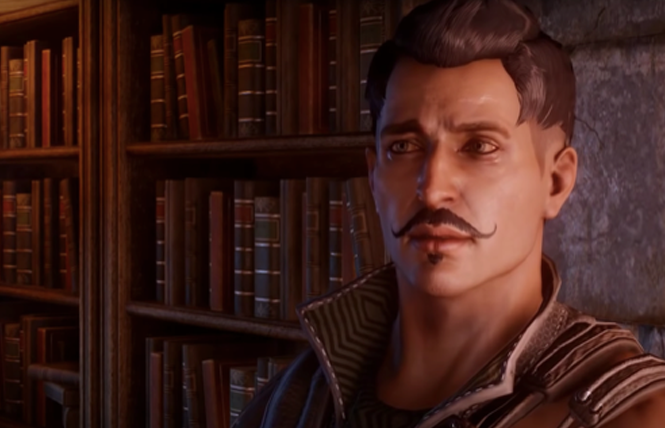 Digital gaydar
Most of the queer characters in mainstream games of the 1990s fit into two categories: stereotypical or discreet. Oftentimes, overt homosexual content, like the leather daddy Ash in Sega's "Streets of Rage 3," was completely erased from American versions of games. In other instances dialogue was changed to remove any sexual ambiguity. But many more characters were simply hidden in plain sight. Recognizing LGBTQ characters in games was akin to recognizing LGBTQ people in books, films, or real life: one needed to keep track of context clues and add them up, like a digital gaydar.

In the 1995 game "Earthbound," released on the Super Nintendo, one of the minor characters, an adolescent boy named Tony, has a deep friendship with his classmate Jeff. Tony helps Jeff break out of boarding school so Jeff can help the player save the world. Later on in the game Tony is kidnapped, and when the player discovers him under duress, he repeatedly says Jeff's name. Years after the game's release, developer Shigesato Itoi said of Tony: "I designed him to be a gay child."

Rarely would a developer confirm a character's sexuality as Itoi did. Most times players were left to draw their own interpretations about a character's sexual orientation. Other assumed but unconfirmed examples of queer characters include Billy and Brad from "Wild Arms 2," Jaciel and Deyanira from "Elder Scrolls II: Daggerfall," and "Front Mission 2's" Rocky and Ash.

In the late 1990s and early 2000s, as a precursor to games like "Dragon Age," many games unveiled the ability for players to make choices, choose-your-own-adventure style, that impacted the main character's relationship with others. Sometimes this included the option for the characters to enter into romantic relationships. Games like "Star Ocean" and "Jade Empire" allowed players to choose male or female main characters and to romance the supporting characters regardless of gender. The same feature was present in the very first "The Sims" game, having been programmed by a gay employee, though its inclusion occurred largely due to a series of miscommunications.

When "The Sims" — the now-iconic life simulation game — was first being developed, the creative team initially decided not to include the ability for characters to have same-sex relationships. But when the game's code actually got written, the programmer was given an old memo that did not reflect that decision, and he wound up creating the ability for characters to romance whomever they wished. Even after a kiss between two female Sims shocked the audience during a demo at the Electronics Entertainment Expo, the function was allowed to remain. "The Sims" became a global hit and spurred many sequels that have sold over 200 million copies worldwide.

In 1998, "Fallout 2" became the first video game to allow same-sex marriages, almost two decades before nationwide marriage equality in the U.S. A few years later, "Fable" (2004) and "The Sims 2" (2004) followed suit. Players of those games could choose whom they decided to flirt with, romance, and marry. The ability for the player to control a main character that entered into a gay or lesbian marriage was an historic development. But the decision to engage in same-sex relationships was left to the player, and most LGBTQ content in games could still be avoided if one did not wish to see it. But that was slowly beginning to change.

By the time the Supreme Court made its milestone 2013 decision in United States v. Windsor, which set the stage for marriage equality a few years later, LGBTQ characters were featured in numerous games a year. According to the LGBTQ Video Game Archive, 63 games released in 2013 featured LGBTQ characters or content.

2013 was also the year gamers were introduced to Ellie, one of the main characters in "The Last Of Us," widely considered to be one of the greatest games of all time. As she makes her way across a decimated United States, Ellie is reluctant to talk about her personal life, but by the journey's end she opens up about a girl she once loved. In the game's two sequels, 2014's "Left Behind" and 2020's "The Last of Us 2," Ellie's sexuality is featured front and center. The trailer for "The Last of Us 2" shows her dancing with her new girlfriend, Dina, before the two passionately kiss. The game also features a trans male character, Lev, who escapes his abusive family after being deadnamed and subjected to myriad other abuses. (The real-world actor who Lev was modeled on, Ian Alexander, is also trans.)

The game was not without controversy. Expectedly, anti-LGBTQ groups decried the mere inclusion of characters like Ellie and Lev. But the game also drew ire from the LGBTQ community and its allies for the violence that Lev goes through, with some claiming the deadnaming was unnecessarily graphic when Lev's traumas had already been thoroughly exposed. The Netflix documentary "Disclosure" addressed a similar predicament in the TV and film industry, that early trans representation, while groundbreaking, normalized the idea that trans people exist merely as objects of comedy, disgust, or hatred and not as fully realized human beings. But it is possible that, just as television and film have improved in portraying trans characters and hiring trans actors, writers, and directors, so too might the video game industry as it continues to evolve. And in many ways, an evolution has already begun.

LGBTQ content continues
While it takes hundreds of millions of dollars, large teams of people, and corporate oversight to release a game like "The Last of Us," it is now much easier for people to create and distribute their own games without the need for expensive equipment or the approval of a publisher. Eric Barone created the farming simulation "Stardew Valley," which featured same-sex marriages, adoptions, and divorces, in the C# programming language. And many independent LGBTQ games have been created using Adobe Flash, including Anna Anthropy's "Dys4ia," an autobiographical game created during Anthropy's first six months of hormone replacement therapy, "Coming Out Simulator 2014," based on developer Nicky Case's own coming out experience, and Taylor McCue's "Do I Pass?," an interactive novel about a trans person's experience riding a bus.

Independent LGBTQ games have also been developed for game jams — contests where people create video games from scratch — using software like Twine, Unity, and GameMaker. In 2015, after Leelah Alcorn, a 17-year-old transgender girl, died by suicide, Matthew Boucher and Kara Jayne hosted Jam For Leelah. Twenty-one new trans-positive video games were created over the course of a month, many of which are still available to play on the web platform Itch.io.

LGBTQ inclusion in the video game industry continued to rise throughout the 2010s and into 2020. Many modern mainstream video games, including "Life Is Strange," "NieR," and the "Fire Emblem" series now include well-developed LGBTQ characters. Likewise, LGBTQ audiences have continued to pressure the video game industry for greater representation. One of the biggest titles of 2020, Nintendo's "Animal Crossing: New Horizons," changed the character customization option "gender" to "style" after pressure from activists. But aside from the initial dustup, the game has been lauded specifically by trans and nonbinary players, with some crediting the game with helping them realize their true identity and come out to their families.

Many LGBTQ gamers, whether in the 1980s, 1990s, or 2020s, have had their moment of recognizing someone like them in a video game. Games like "Dragon Age," "GayBlade," "The Sims," and "Animal Crossing" mean different things to different people. But together they represent an industry that has gone from featuring stereotypes and coyness to truthful, three-dimensional characters with their own happiness, pain, regret and rebirth.

Queer representation in video games has not been perfect, and the medium still has room for improvement and growth, but there's no doubt that it's in a position — just like literature, just like theater, and just like film — to tell queer stories, and to tell them well.

Jason Villemez is a writer for the Philadelphia Gay News. Read more of his work at http://www.jasonvillemez.com/nonfiction/