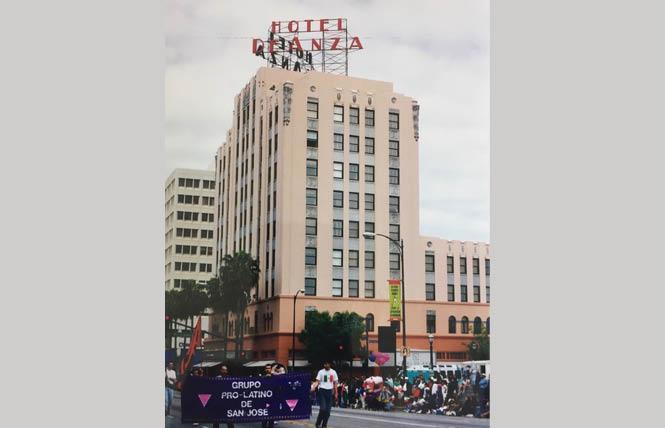 Thirty-five years prior to the killings of Black Americans in recent months by police officers across the country, the shooting death of Melvin Truss by a San Jose police officer outraged and galvanized the LGBTQ community in Santa Clara County. The police department's describing the 17-year-old Truss as a transvestite because he was dressed in women's clothing was denounced, while Truss' family disputed the officer's narrative of what happened the night of May 4, 1985.

As is so often the case in officer-involved shootings, no charges were filed against the officer. But the incident did result in San Jose city officials requiring police officers to be taught about LGBTQ people.

Truss isn't a widely known figure within the LGBTQ community, whether in the Bay Area or nationally. But that is likely to change, as his story is prominently featured on a new website documenting the last five decades of LGBTQ history in Silicon Valley.

"Probably 95% of gay people living down here don't know any of this. I felt a responsibility to tell them as much as we could, " gay former Santa Clara County Supervisor Ken Yeager, director of the online exhibition, told the Bay Area Reporter.

Yeager provided the B.A.R. with an exclusive look at the website before its official unveiling to the public. The BAYMEC Community Foundation, which Yeager oversees as its executive director, used a portion of a $60,000 grant from the Santa Clara County Board of Supervisors it received this year to produce it.

The Queer Silicon Valley website is organized by topic, such as "Politics & Activism," "Culture & Community," and "LGBTQ+ in Tech." The story of Truss' murder can be found under "Crime," along with that of Gwen Araujo, a transgender teen killed in 2002 in the southern Alameda County city of Newark.

There are also dedicated pages for the South Bay's LGBTQ nightlife scene over the years, its Latinx community, and the transgender community. Also highlighted are a number of LGBTQ periodicals that covered the region and the defunct women's bookstore and coffeehouse Sisterspirit.

A timeline offers a quick entry point to the history covered on the website, with links to more detailed pages that people can click on to dive deeper into individual topics, groups, and events. The website's wealth of information about the birth and growth of the LGBTQ community in San Jose and the surrounding cities will take at least 24 hours to fully digest estimated Yeager, who now teaches about local government at San Jose State University.

"We went out of our way on some of these important stories to tell them as comprehensively as we could," said Yeager.

It remains a work in progress, he noted, to be expanded with new information and developments going forward. People are encouraged to leave comments or corrections about the content on the site.

'A starting point'
"I see this as a starting point in recording the rich history that exists in Santa Clara County and Silicon Valley," said Yeager. "I wanted to start documenting the LGBTQ+ movement while many of our elders are still around. It's not nearly complete. That is why I encourage people to contact the BAYMEC foundation so we can add more material and stories to the exhibit."

The new website has a dedicated page about Santa Clara County's out elected officials to date — it includes 11 people — and is likely to need updating after the November 3 election. There are at least 16 out candidates running for public office this fall in the county. 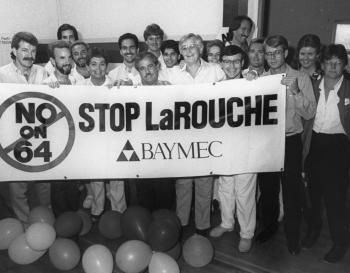 A photograph of the BAYMEC group fighting against California Proposition 64. Courtesy Ted Sahl Archives at SJSU

Much of the archival material used for the website comes from Yeager's own personal trove of records, including the interviews he conducted for his 1999 book "Trailblazers: Profiles of America's Gay and Lesbian Elected Officials." He had told the B.A.R. in 2017 that he planned to donate his papers to the San Jose Public Library's California Room, the system's repository for local history.

The idea at the time, he said, was for his collection to be a part of a South Bay LGBTQ Archive housed at the library, since it already has several collections about local LGBTQ history. But that did not come to fruition, and his archive of papers and other materials has remained housed in the garage of his San Jose home.

"I might add it is a very good-looking garage," Yeager quipped.

As it turned out, having easy access to the records was not only beneficial for the creation of the new website but also for several booklets Yeager wrote in 2018 during his final year in office on the history of LGBTQ politics in Santa Clara County and the response to the HIV/AIDS epidemic in the South Bay. Those works were then incorporated into the corresponding sections on the website.

"It made it easy to look up any dates, old memos, and any old newspapers I had since it is all in my garage," said Yeager.

Featured on the website are stories about 35 past and present LGBTQ organizations including that of BAYMEC, the Bay Area Municipal Elections Committee founded in 1984 by Yeager and others to help elect out candidates in four South Bay counties as well as straight allies of the LGBTQ community.

"Now that we have the website, what we want to do next is do a physical exhibit in a museum. I also want to write a book about this," said Yeager.

Since it no longer appears that the San Jose public library will serve as a repository for LGBTQ archival material from the region, Yeager told the B.A.R. that the community might form its own history center. It would mirror the LGBTQ archives and museum in San Francisco overseen by the GLBT Historical Society.

"It would be great at one point to have an office where people could leave or contribute their collection to the foundation's," he said. "We could have an office and an archive down here. We will see what level of interest there is in this website and in creating a permanent site down here. We would create one separate from what is at the library."