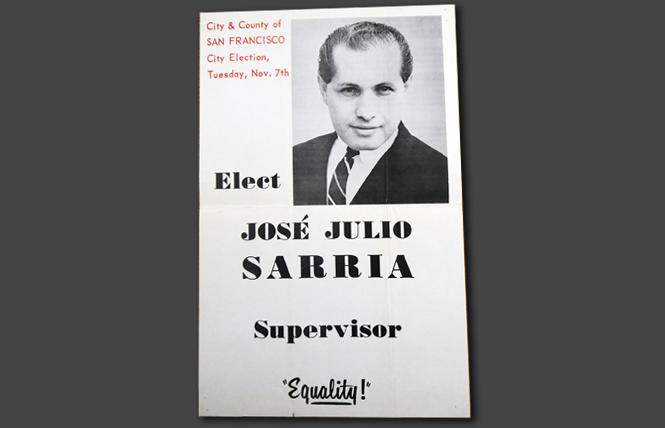 An original campaign poster for José Sarria's 1961 campaign for San Francisco supervisor is part of the collections at the GLBT Historical Society. Photo: Rick Gerharter

Editor's note: This is the final article in a five-part series for LGBTQ History Month featuring objects that one day could be exhibited in a new, full-scale LGBTQ Museum and Research Center in San Francisco.

A black and white photo in the upper right-hand corner features a smiling male candidate decked out in a conservative suit and striped tie ensemble. His intense gaze is aimed directly at the camera and, thus, anyone viewing the poster.

Beside and below the image is printed a simple request — "Elect José Julio Sarria Supervisor" — above the word "Equality!" In the upper left-hand corner is a reminder in red ink that the election in the city and county of San Francisco will take place Tuesday, November 7.

The simplicity of the poster belies its political significance. It is from Sarria's 1961 bid for a seat on the San Francisco Board of Supervisors, which marked the first time an openly gay person campaigned for elected office anywhere in the world.

Sarria, one of the most famous drag queens of his day who died in 2013 at the age of 90, came close to being elected. But his candidacy spooked the local powers that be so much that Democratic Party leaders tried to keep him from running as a Democratic candidate. Faced with the threat of a lawsuit, the Democrats relented but recruited two-dozen people to enter the race to ensure that Sarria had to compete for one of the six seats up for grabs that fall.

Come Election Night, Sarria ended up in ninth place with nearly 6,000 votes. Nonetheless, his courage to seek public office as an out candidate at a time when gay people could be imprisoned inspired other LGBT people to follow suit.

The poster is now preserved in the archives of the GLBT Historical Society in downtown San Francisco. It is among the various political ephemera the archival group has preserved that documents the LGBT community's quest for political representation at all levels of government.

Although the archival group's Sarria collection is one of its largest, it has never mounted a full retrospective about the gay icon at the museum it operates in the heart of San Francisco's Castro district.

"We have a small exhibit on José and one of the costumes he wore," noted Terry Beswick, the historical society's executive director.

Unlike Sarria's friend Harvey Milk, who in 1977 became the first gay person to be elected a San Francisco supervisor only to be assassinated a year later, there has yet to be a Hollywood biopic filmed or traditional biography written about Sarria. Director Joe Castel is working on a documentary, "Nelly Queen: The Life and Times of José Sarria."

He screened a work-in-progress version of the film at the Qfilms Long Beach Film Festival in September and won the audience award for best feature film. In 1998 Michael Gorman published his Lammy Award-winning book "The Empress Is a Man: Stories from the Life of José Sarria," which is based on multiple conversations he recorded with Sarria.

Yet Sarria remains mostly unknown by the general public.

"A lot of people have never heard of José Sarria," said Beswick. "Even among my generation people don't know him."

Sarria's political race was just one chapter in his remarkable life. A San Francisco native born to South American immigrant parents, he enlisted in the U.S. Army following the attack on Pearl Harbor and was discharged in 1947.

Rise to prominence
Beginning in the 1950s, Sarria rose to prominence with his drag cabaret shows at the Black Cat Cafe, a now defunct gay bar in the city's North Beach neighborhood. He would beseech the audience members to come out of the closet, telling them that "united we stand, divided they catch us one by one."

He was a co-founder of both the League for Civil Education, which in 1960 formed to protest laws banning bars from serving alcohol to gay people, and the Society for Individual Rights, an early gay rights organization that launched in 1963.

In 1965, Sarria created what became known as the Imperial Court System by crowning himself "Her Royal Majesty, Empress of San Francisco, José I, The Widow Norton." The title was in homage to Joshua Norton, an eccentric city resident who in 1859 declared himself Emperor of the United States and Protector of Mexico.

The court system grew into a major fundraising mechanism for a wide variety of causes, from LGBT issues to caring for people living with HIV and AIDS. It now has chapters in dozens of cities across the country as well as in Canada and Mexico.

Two years ago Sarria's biography was featured in the Oakland Museum of California special exhibit "Over The Top: Math Bass & the Imperial Court SF." Sarria had recorded an oral history interview in 1990 for the East Bay institution and donated several personal items to its collection. This summer he was among the LGBT icons showcased in the museum's "Queer California" show.

For years LGBT leaders have sought to see Sarria be inducted into the California Hall of Fame, whose honorees are selected by the governor. They are hoping Governor Gavin Newsom will select him for the honor. During Newsom's first term as mayor of San Francisco, city leaders in 2006 renamed a portion of 16th Street in front of the city's Castro branch library, which is named after Milk, as José Sarria Court.

The GLBT Historical Society's archival holdings from Sarria's multi-faceted life are so deep that they would lend themselves to myriad exhibits and storytelling possibilities in its planned future permanent museum. Curators could choose from his drag costumes and political ephemera to historic photos and oral histories.

"We have so much of this in José's own voice," noted Evans.