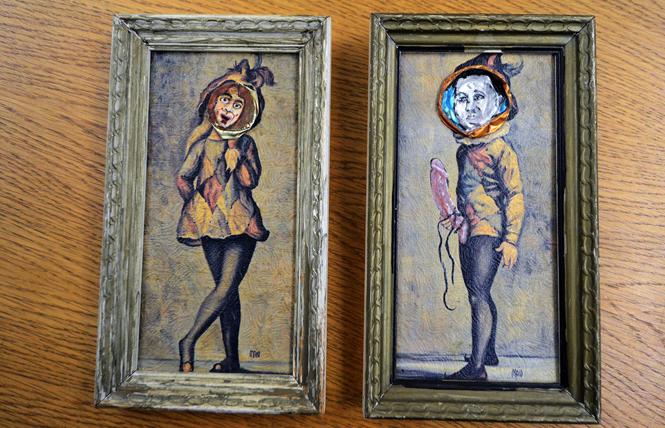 Editor's note: This is the fourth article in a five-part series for LGBTQ History Month featuring objects that one day could be exhibited in a new, full-scale LGBTQ Museum and Research Center in San Francisco.

The GLBT Historical Society's museum in the heart of San Francisco's Castro district operates similarly to that of any art museum. It mounts special exhibitions in order to attract repeat visitors and over the years has refreshed what it puts on display in its main gallery space.

But the archival group doesn't consider itself to be an art collecting institution. Nonetheless, among the stacks of its archives downtown are numerous works by various artists. Most of the pieces have never been shown in a public show, while those that have gone on view were incorporated into one of the museum's limited-run exhibits.

It is unknown just how many artworks are stored away in the historical society's archive. Some of the pieces ended up in its possession because they came along with the artists' personal collections that they or their loved ones had donated to the institution.

The nonprofit has been assessing its holdings in its art and artifacts collections using a $30,000 grant it received last year from the city. It expects to finish cataloging the thousands of items by the end of 2020.

Alongside the various garments and political ephemera the society staff selected were two artworks by Jerome Caja, a celebrated visual artist and drag performer. They were acquired as part of the collection of gay former San Francisco Examiner art critic David Bonetti, who died last year. (The Smithsonian Institution has Caja's personal papers and effects in its archives.)

The pair of untitled paintings by Caja showcase how he often worked with found objects and items associated with femininity such as nail polish, lace, and glitter. For the artworks, he transformed 1960s dime-store-reproduction paintings of harlequins in plastic frames that he had bought. To each he affixed a bottle cap featuring a visage of his making.

"The artwork tells a story that is illustrative of a period in history," said Evans.

Terry Beswick, the historical society's executive director, would run into Caja at the End-Up's long-running dance party Club Uranus. Caja had gained notoriety, recalled Beswick, as a performance artist with ACT UP during the height of the AIDS epidemic in the late 1980s. He would die from complications of AIDS in 1995 at the age of 37.

"He was quite prolific as an artist. A lot of his work was in miniatures," recalled Beswick. "His tastes went to the macabre, likely as a reaction to all the death and morbidity due to AIDS."

"I don't know if it was a symbol of protest for him or a bit of self expression," said Beswick.

At some point Beswick recalled attending a show Caja had mounted of his bottle cap artwork held in a space in the Castro. But the significance of what he saw back then didn't register at the time.

"When he died, it felt like the end of an era for us in many ways," said Beswick.

Caja was born in Cleveland, Ohio in 1958 and was one of 11 sons reared by his Roman Catholic parents. He headed west to San Francisco when he enrolled in the San Francisco Art Institute, from which he graduated with a master's of fine arts degree in 1986. He incorporated Greco-Roman and Catholic iconography into his art, which is internationally collected and in the collections of major museums, such as the San Francisco Museum of Modern Art and the Los Angeles County Museum of Art.

Nearly 120 of Caja's artworks were included in this summer's "About Face: Stonewall, Revolt and New Queer Art" show at the Wrightwood 659 art exhibition space in Chicago. Writing about the show for the New York Times, Arthur Lubow remarked that Caja had conveyed the horrific absurdity of the AIDS epidemic in his art "with biting humor and Rabelaisian earthiness."

The sexual liberty that Caja and other young gay men had "embraced as life-affirming," noted Lubow, had also "marked them, seemingly at random, for hideous deaths. What else could he do but joke about it?"

It is an open question how the pieces owned by the historical society would be incorporated into its future museum in San Francisco.

"I don't know if we would do a full show," said Beswick. "But maybe we would install a small gallery dedicated to Jerome and his milieu."