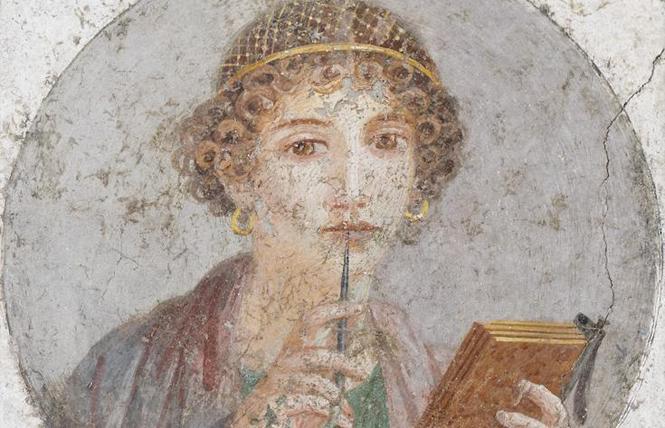 If there is a singular lesson to be learned this LGBT History Month, it is that lesbians didn't just appear suddenly in the 20th century, anomalous figures with no antecedents throughout history. Lesbians have lived and loved and had bodice-ripping passionate sex for millennia.

In a brutal irony, the erasing of lesbian sexuality has been done most effectively by female academics who hesitate to define same-sex relationships between women as sexual for reasons that are wholly rooted in male contrivance of female sexuality and the male gaze on it. The theory that women never performed sexual acts together before the 20th century is appallingly smug and not a little homophobic.

Every woman, regardless of her orientation, knows from a young age that lesbians are a trigger for men. The most common retort when a woman rejects a man's advances or catcalls is to call her a "dyke" or "lesbo." It happens every day, everywhere. The terms are meant to be both vulgar and dismissive, like "lezzie," a diminution and infantilizing of a very real female sexual orientation.

This lesbophobic, misogynist, and blatantly ahistorical erasure of lesbian sexuality is similar to the erasure of all autonomous female sexuality: women's sexual desire has always been viewed, discussed, and portrayed within the construct and purview of the male gaze, and as such has never seemed complete without the intrusion of a male into that space of wholly female desire. The trope of a male entering onto the scene of a lesbian sexual coupling just in time to "complete" the sex has been recorded in erotica and pornography since at least the 17th century in the West and far earlier in Asian erotic art.

In Cleland's novel, Fanny engages in lesbian sex with Phoebe, a bisexual prostitute. Fanny also witnesses — and describes vividly — other lesbian sex scenes. The novel was first banned in the U.S. in 1821 in Boston, and may have been a progenitor for the term "banned in Boston."
Initially, the American colonies had sought to imprison lesbians. The criminalization of same-sex female relationships followed that of English Common Law. How often it was actually enforced is unclear. But in the U.S. alone there were laws against lesbianism as early as the 17th century. If there hadn't been examples of lesbians and lesbian sex, why the laws prohibiting it?

In 1636, John Cotton of the Massachusetts Bay Colony proposed a law prohibiting sex between two women, punishable by death. The law read, "Unnatural filthiness, to be punished with death, whether sodomy, which is carnal fellowship of man with man, or woman with woman, or buggery, which is carnal fellowship of man or woman with beasts or fowls." There is no record of this law being enacted.

In 1649 in Plymouth Colony, Sarah White Norman and Mary Vincent Hammon were prosecuted for "lewd behavior with each other upon a bed." The trial documents are the only known record of sex between female English colonists in North America in the 17th century. Hammon, who was the younger of the two, was given a formal admonition, but Norman was convicted. As part of her punishment, she had to allocute publicly to her "unchaste behavior" with Hammon.

In 1655, the Connecticut colony passed a law criminalizing sodomy between women (and men). In 1779, Thomas Jefferson proposed a federal law that included lesbian and gay sex. The law read, "Whosoever shall be guilty of rape, polygamy, or sodomy with man or woman shall be punished, if a man, by castration, if a woman, by cutting thro' the cartilage of her nose a hole of one half inch diameter at the least."

Misperception
Lesbianism has been perceived by many — and Sigmund Freud perpetuated this misperception — as a phase of female sexuality that women grow out of. Schoolgirl crushes and teenage experimentation with lesbian relationships was written about by Freud as a stepping-stone to "true," "adult" female sexuality: heterosexuality. (Ironically or not, Freud's daughter, psychoanalyst Anna Freud, was in a lesbian relationship with child psychoanalyst Dorothy Tiffany Burlingham for more than 50 years.)

Is language the problem? It's true that the terminology itself is fairly recent. "Homosexual" was first coined in an 1869 pamphlet written by Karl-Maria Kertbeny to decry anti-sodomy laws in Germany. In 1886, Richard Krafft-Ebing, the noted German psychiatrist, coined the terms "heterosexuality" and "homosexuality" in his work Psychopathia Sexualis.

The term "lesbian" was first seen in poems by men in the 1860s and then more commonly as a medical term for lesbian sex in 1890. The term "Sapphist" occurs earlier, in early 19th century poetry and literature.

The Greek poet Sappho, whose birthplace of Lesbos spawned the term "lesbianism" and whose name has become synonymous with female homosexuals — Sapphists — was born in 630 B.C. The relationship of Ruth and Naomi in the Bible and Talmud, the oft-cited verses in Leviticus, as well as St. Paul's comments on same-sex relationships in Corinthians, all signal lesbianism as a real — and definitively sexual — fact.

Sappho
Sappho's extant poetry and other writings explore her love for other girls and women and there are depictions in art throughout the centuries from classical Greece to the 19th century pre-Raphaelites of lesbian lovers entwined in each others' arms, often fully naked. At the turn of the last century, Toulouse-Lautrec and other French and German post-Impressionists incorporated lesbians into their work as denizens of a Bohemian demi-monde. In Paris, Amsterdam, and Berlin communities of lesbians were thriving, albeit underground, which by the turn of the 19th into the 20th century would include large enclaves of American women, expatriates whose names are now revived each year at LGBT History Month as veritable monoliths in our compendia of writers and artists: Gertrude Stein, Alice B. Toklas, Romaine Brooks, Djuna Barnes, Natalie Barney, Josephine Baker, Renée Vivien, Ida Rubenstein, and more. While these women fled the U.S. and the mores that made it difficult for them to live the openly — some would claim flagrantly — lesbian lives they led in the U.S., there remained hundreds of thousands of lesbians still in America, leading very different lesbian lives — yet not the neutered lives we have been led to believe.

Victoria A. Brownworth writes the Lavender Tube column for the Bay Area Reporter and writes frequently for other publications. Author's note: For the purposes of space, except for brief references, this article focuses on lesbian couplings in the U.S.

Part 2 is available online at ebar.com.