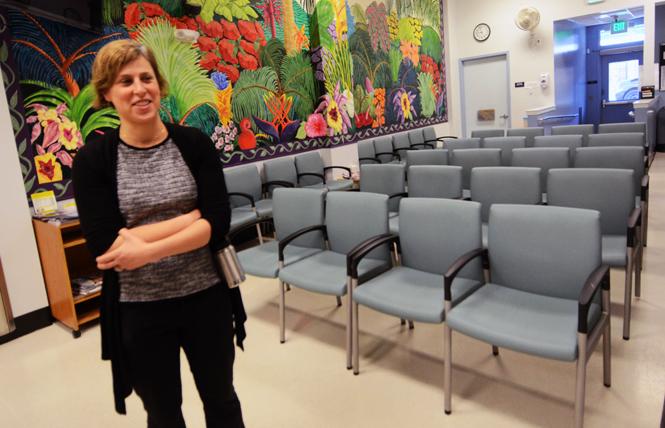 Reported rates of some sexually transmitted diseases dropped precipitously from last year's numbers as of the end of June, according to statistics released by the San Francisco Department of Public Health, a side-effect of less testing and changed sexual habits due to the COVID-19 pandemic.

Reported syphilis cases were down slightly, from 914 to 826 in the same timeframe, but 2020 has seen a rise in cases of primary and secondary syphilis, unknown latent syphilis, and cases among women.

Janessa Broussard, the senior director of clinical services for Magnet, the sexual health clinic located at the San Francisco AIDS Foundation's Strut health center in the Castro, told the Bay Area Reporter that people should be cautious about what the numbers represent.

"I think we can't really say for sure if there has been less community spread," Broussard said. "Within our PrEP program we have had a subset of clients saying they are not [sexually] active during shelter-in-place outside their primary relationship, but there are others who are continuing their normal patterns. Some have transitioned from daily PrEP to 2-1-1 PrEP. What I can say for certain is that the access to STI testing really dramatically decreased during shelter-in-place."

Broussard said that some people are understandably nervous about entering a clinic at all, considering the COVID-19 virus, but explained that people are screened for symptoms when they arrive.

Dr. Stephanie Cohen, the medical director of the Department of Public Health's City Clinic in the South of Market neighborhood, was less willing to speculate on the meaning of the numbers. This was the first time someone from DPH was able to talk to the B.A.R. about STD rates since before the pandemic.

"I think that the numbers we report reflect the number of cases diagnosed. They are subject to the same limitations they have always been subject to," Cohen said. "Case counts are a proxy for rates, but they are not themselves rates."

Cohen and Broussard said that sexual health workers are attempting to find better ways to diagnose and treat STDs with the COVID-19 pandemic in mind.

"The COVID pandemic has made us innovate in many ways and I think that will be long-lasting," Cohen said. "Home testing is one of the very important technologies we are scaling up."

"There are a number of projects that offer home testing," Cohen added. "We are partnering with Take Me Home. Take Me Home currently has only HIV testing but they will be adding STD testing to their platform. We want folks to be made aware of that option."

Another thing Cohen said can be done is to have people being tested take their own swab samples at a clinic instead of having medical staff do it for patients.

Broussard said that there is not a plan at the moment for Strut to return to normalcy, as little is known about how the COVID-19 pandemic will play out.

"We are definitely trying to hone in on the ways to increase access now," she said.

The survey of the nation's youth asks questions about sexual behavior; alcohol, tobacco, and drug use; dietary behaviors and physical activity; and behaviors that contribute to physical injury and violence.

All told, 11.6% of San Francisco high school students who participated in the survey had been tested for HIV, a decrease from 14.2% in 2013; 27.7% of those of both sexes with same-sex-only contacts had been tested.

Twelve percent of San Francisco high school students had been tested for sexually transmitted diseases other than HIV. That figure was 18.7% for those who'd only had same-sex contacts.

Erik Martinez, a queer man who serves as San Francisco Unified School District LGBTQ programs coordinator, told the B.A.R. about some of the services the district provides.

"SFUSD provides comprehensive sexual health education in all middle and high schools," Martinez stated in an email to the B.A.R. "Under the umbrella of wellness centers, school social workers, and school district nurse services, we have a long-standing condom availability program in secondary schools.

"In addition, there is an active partnership between SFDPH and SFUSD to offer some sexual health services at the wellness centers located at Willie Brown Middle School, Burton High School and Balboa High School," he stated. "During shelter in place and distance learning, wellness center staff, school social workers, and school district nurses continue to connect with students and refer students to sexual health services available at New Generation Health Center and the Michael Baxter Clinic at Larkin Street Youth Services."

As STDs continue to rise, SF clinic gets a refresh

Syphilis rates up in 2019, but public health shifts to virus