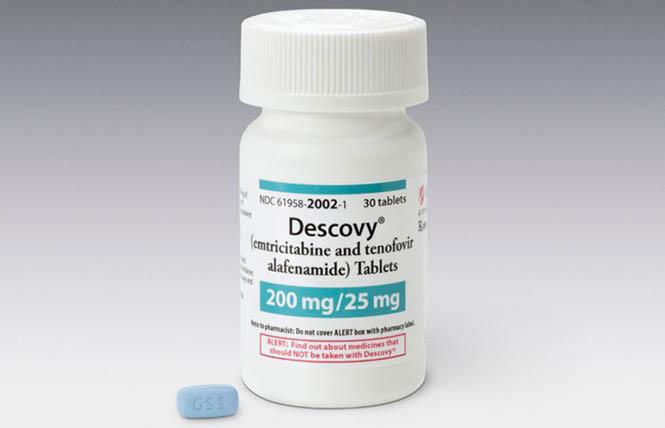 The federal Food and Drug Administration October 3 approved a new daily PrEP pill that could offer a safer option for some individuals at risk for HIV, but the indication does not cover everyone who could potentially benefit from the prevention medication.

As the Bay Area Reporter previously reported, a panel of independent experts voted at an August hearing to recommend FDA approval of Descovy PrEP for men who have sex with men and for trans women. But the panel narrowly voted against extending this recommendation to cisgender women due to a lack of evidence from clinical trials.

In the end, the agency decided to base the Descovy indication on the type of sexual activity rather than sexual orientation or gender identity. In contrast, the first and only other approved PrEP pill, Truvada (tenofovir disoproxil fumarate/emtricitabine), has no such limitations. Gilead Sciences Inc. makes both combination pills.

The tenofovir alafenamide (TAF) in Descovy, an updated version of the tenofovir disoproxil fumarate (TDF) in Truvada, produces higher levels of the active drug in HIV-susceptible immune cells. This means it can be given at lower doses, resulting in less drug exposure for the kidneys, bones, and other organs.

Approval of Descovy for PrEP was based on findings from the DISCOVER trial, which enrolled more than 5,300 men who have sex with men and a small number of trans women, but excluded cisgender women. Participants were randomly assigned to take Descovy or Truvada once daily for two years.

As reported at the Conference on Retroviruses and Opportunistic Infections in March, both pills proved highly effective. After one to two years of follow-up, there were seven new HIV infections in the Descovy group and 15 in the Truvada group, yielding incidence rates of 0.16 and 0.34 per 100 cumulative years of follow-up, respectively. Given the small number of infections in both groups, this was not a statistically significant difference, leading the investigators to conclude that Descovy is noninferior to Truvada, meaning they considered it equally effective.

Some researchers have suggested that the lower HIV seroconversion rate in the Descovy group might be due to the fact that TAF leads to higher drug levels in cells, which are reached more quickly and persist longer compared with TDF. This could potentially be important for gay and bi men using an on-demand, or 2-1-1, PrEP regimen taken before and after sex. (The FDA has not approved intermittent dosing for either Truvada or Descovy, although some providers are already prescribing the 2-1-1 Truvada regimen.)

The effectiveness of Descovy PrEP for people having vaginal sex has not yet been demonstrated in clinical trials. Prior research using TDF has shown that tenofovir reaches lower levels and does not last as long in vaginal and cervical tissues compared with rectal tissue. Gilead urged the FDA to extrapolate from existing pharmacokinetic data showing that TAF produces adequate drug levels in women, but the agency declined to approve Descovy for this group without more direct evidence.

Some advocates praised this decision. "No data in women, no approval!" Lynda Dee of the Fair Pricing Coalition wrote in an email message. "Women deserve the same evidence-based research as men." In online discussions of the approval, trans men also lamented that they have not been included in PrEP trials.

Looking at safety, Descovy has less detrimental effects than Truvada on biomarkers of kidney function and bone loss, although it is not clear whether this matters in terms of clinical outcomes like fractures. On the other hand, Descovy has a less favorable effect on blood lipid levels, which could have implications for cardiovascular risk.

Descovy could therefore be a preferable option for individuals at risk for kidney or bone problems. After presenting the DISCOVER findings at the March conference, Dr. Brad Hare of Kaiser Permanente San Francisco told the B.A.R. that Descovy "is probably a slam dunk" for people with moderately impaired kidney function. But for the vast majority of people taking PrEP, Truvada is safe and well tolerated.

Given the very high effectiveness and overall safety of Truvada PrEP in real-world use, some advocates argue that any small improvements in safety or efficacy will not be worth the added cost of Descovy for most people. Descovy and Truvada cost about the same now — approximately $2,000 a month — but the TDF combination is expected to be cheaper once generic versions become available starting next year.

Gilead currently has a medication assistance program to help people obtain Truvada, as well as a co-pay coupon program for those with private insurance. The company indicated in a statement that this assistance will also be available for people who wish to use Descovy for PrEP.