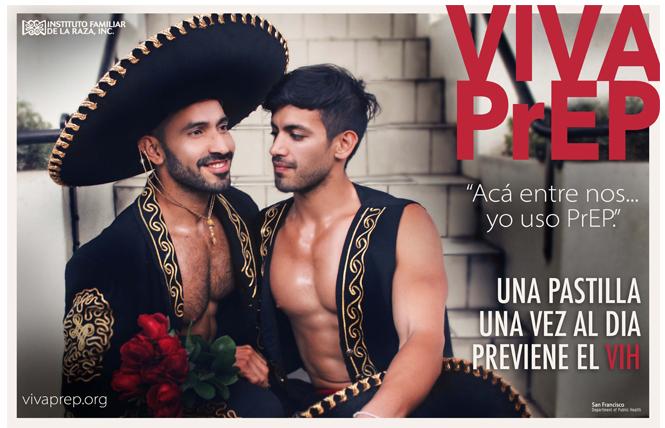 "Solutions for the Latino community must be driven by the community itself," said IFR Executive Director Estela Garcia, doctor of mental health. "Many of the staff members who contributed to the campaign are part of our target population. They understand firsthand the barriers many Latinos face and are committed to community health and empowerment."

Outreach events to introduce the campaign, which began in May, and promote PrEP use will take place over the next several months, according to IFR program manager Rafael Velázquez.

Often campaigns that aim to reach Spanish-speaking Latinos fail because they are first designed for an English-speaking audience and then translated, Velázquez told the Bay Area Reporter. But Viva PrEP is different.

"From the get-go, Viva PrEP was designed with our community in mind," he said. "Our community knows when something is designed for them, and it is powerful to see yourself represented."

IFR's Si a la Vida program offers PrEP services for the Latino LGBT community in partnership with the San Francisco Department of Public Health, focusing on men who have sex with men and trans women. Services are available for documented and undocumented people with or without health insurance.

"Campaigns like Viva PrEP are important for immigrant trans Latinas because we are some of the most impacted by HIV," IFR transgender services health educator Yazmin Macias told the B.A.R. "Most times information about health and wellness services is not tailored to transgender women and we rarely see ourselves portrayed accurately and with dignity."

The federal Food and Drug Administration approved Truvada (tenofovir DF/emtricitabine) for HIV prevention for adults in July 2012, and last month approval was extended to adolescents. Clinical trials show that, when taken consistently, Truvada reduces the risk of HIV infection among men who have sex with men by around 90 percent, with infection rates approaching zero for people who take it at least four times a week.

PrEP use has scaled up rapidly in San Francisco, especially among white gay and bisexual men in their 20s through 40s, but adoption has been slower among African-American and Latino gay men and among youth.

Nationwide, about a quarter of new HIV diagnoses in 2015 occurred among Latino and Hispanic people, according to the Centers for Disease Control and Prevention. In San Francisco, Latinos account for 28 percent of new diagnoses, according to the latest SF DPH HIV epidemiology report, and in California this figure rises to 44 percent statewide.

"Although enormous progress has been made in treating people with HIV, thousands of new HIV infections occur every year, and people of color continue to be disproportionately impacted," Velázquez said. "The only good news about health disparities is that they are preventable. And if we're able to continue messaging correctly - in a language and through a culture that's familiar to those we serve - we can do our part to solve this."

PrEP is offered through San Francisco City Clinic, all clinics in the San Francisco Health Network, and many other providers, including the San Francisco AIDS Foundation's Magnet sexual health services at Strut. Truvada for PrEP is covered by Medi-Cal and most commercial insurance, and manufacturer Gilead Sciences offers patient assistance and copay programs to help offset the cost.

San Francisco's Getting to Zero initiative considers expanded access to PrEP - along with rapid initiation of antiretroviral treatment and retaining HIV-positive people in care - to be a key component of its three-prong strategy to make San Francisco the first city to eliminate new HIV infections, deaths due to HIV/AIDS, and stigma against people living with HIV.

"In order for the epidemic to end in San Francisco, Latinos need to get to zero as well," Velázquez told the B.A.R. "This requires community-specific funding, awareness campaigns created by the community for the community, and strong partnerships across all communities impacted by HIV."